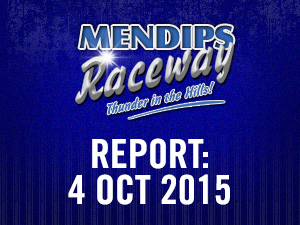 The Weather was dry and mostly overcast with dry track conditions, for the Special Rods, Junior Rods, and Old Skool Unlimited National Bangers all contesting their West of England Championship

The Special Rods again had some very close racing with a lot of overtaking. The grid for the West Of England Championship decided from the points scored from the two heats with the highest point scorer one pole etc.
17 Cars came out for the 1st Heat. 175 Kevin Oliver out dragged pole sitter 46 Angie Harris for the early lead then 701 Ben Brice. Brice then found a way past Harris, then Oliver to take up the lead, then Harris nipped up the inside of Oliver for 2nd.

Brice managed to pull out a big gap from 2nd. 5 Alan Lettley found a gap on the inside of Oliver, and Harris for 2nd . 43 Andy Howard managed to get to the front of the star grade battle as they carved their way through the pack, and A.Howard found a way past Harris then Lettley to take the lead.

Further back 304 Tim Weare was making good progress until he accidently squeezed Oliver into the fence in the closing battles, and Weare got a black flag. 192 Ashley Raymond spun out on the last lap. Brice took the win from A.Howard (from 14th on the grid) then, 41 Dene Howard (from 15th).

18 cars came out for the 2nd Heat.  Harris took the early lead from pole from Oliver, within  a lap Brice got from 5th on the grid to 3rd, ,  Brice then went round the outside of Oliver, then Harris to take the lead, by the ½ way mark Brice had built up a big lead from Harris then 136 Jason Horseman then 720 Dan Latimer then Weare, Horseman then tried to go round the outside of Harris and after a few laps side by side Horseman managed to pass for 2nd.  D.Latimer then took a couple of laps to pass Harris on the outside Oliver then got spun out on the turnstile bend which scattered the pack and caused some drivers to crash including Weare who had to retire.

On the re-start, Brice lead the one lap dash from Horseman. 426 Russ Colenutt managed to pass Raymond on the outside to relieve him of 4th. Brice went on to win from Horseman, then D.Latimer, then Colenutt (from last on the grid).
18 cars came for the West of England Championship Final, and Brice took the early lead pole from D.Latimer, D.Howard went straight round the outside of Horseman for 3rd then went up the inside of D.Latimer and crashed out on the turnstile bend.

Colenutt found a way past Horseman, then went round the outside of D.Latimer for 2nd. Further back there was an eight car battle for 7th then there was a three car pileup involving Harris, Oliver, and, 730 Scott Sealey.
Brice led the re-start from D.Latimer then Colenutt (who only just got past D.Latimer before the red flag and as per the last completed lap he was in 3rd), Brice quickly built up a gap from 2nd, then D.Latimer left a gap on the inside and Colenutt didn’t need a 2nd invite to take 2nd, then Brice lost time trying to avoid a spinning backmarker, and Colenutt managed to get right on his tail, but Colenutt couldn’t find a way past, and Brice took the win from Colenutt, then, D.Latimer.

13 cars came out for the Grand National, with Brice on pole but lap down , 831 out dragged pole sitter  Harris for the early lead, after a few laps Horseman went round the outside of Harris, then 831 to take the lead closely followed by 51 Rob Price, then D.Latimer, and with about 3 laps left Price got on the outside of Horseman, and they went side-by-side for a couple of laps before Price was able to make it stick, the top three crossed the line very close, Price went onto win from Horseman then, D.Latimer. Colenutt won the track championship.

The Junior Rods again had some very close and competitive racing, 15 cars came out for the 1st heat, 35 Charlie Johns took the early lead from pole, and 911 Rhys Burgess-Seabourne quickly passed, 75 Jack Buckingham, and 100 Thomas Week for 2nd, and 30 Joe Capel quickly got from 11th to 3rd.

Seabourne then tried the outside of Johns and they went side-by-side for a few laps and couldn’t make it stick, then Capel went round the outside of Seabourne, then Johns, to take the lead, closely followed by 224 Jordan Edwards, 108 Adam Headland, and 956 Harry Thompson.

Capel went on to take the win from Edwards, then Headland. 15 cars came out for the 2nd heat 101 Jack Mintram out dragged pole sitter 77 Jacob Filer for the early lead, and 285 Jacob Anderson quickly got up to 3rd from 8th on the grid, and Capel quickly up to 4th.

On the last lap Anderson left a gap on the inside and Ayles didn’t need a 2nd invite!! On the last corner Anderson run into the back of Ayles and Anderson lost a place then was docked for contact. Ayles went on to win (from last on the grid) from, B.Pearce then, Gumbleton.

21 cars came out for their West Of England Championship with the highest point scorer on pole etc. Capel led from pole from B.Pearce. Then Gumbleton, and Ayles found a way past 285 for 3rd and 4th further back  Filer got spun out and was collected head on by Johns, who was both ok.

There were 35 Bangers in action which was split into two Heats’. All the races were run at a very fast pace!

There was a good mix of cars including 363 Sam Trim in a Toyota Crown, 54 Tom Davey in a Yank tank, 199 Andy Dodge, and 440 Macauley Mills had Limo’s, 80 Matt Nutley in a people Carrier, a few Jag’s, and Volvo estates, and a Sierra, and a Cavalier, and a Mercedes amongst other cars. The Top Tin Awards went to 743 Kev Hooper in a Volvo Estate, and 09 Adam Elias in a Triumph.

18 cars came out for the 1st Heat pole sitter Hooper spun, and 122 Jesse Ashley took the lead, there was a bit of pushing, and Davey, 2  Shaun Fisher, 172 Simon Bryne, and 410 Andy Burt was amongst the few spinners, Ashley went on to win from 246 Ryan Sparkes, then Hooper.

17 cars came out for the 2nd heat  at the start 189 Jamie Knox shoved Nutley wide and spun 739 Jason Moore round at the same time, then Knox had a ½ spin and was collected by 382 Danny Hunt,
Moore got spun again, and 129 Lee Dalton got spun out three times, 797 Scott Clarke gave 505 Sam May a small jacking there was a few more knock and spins, 362 Johnnie James went onto win from 262 Rob Bugler, then D.Hunt.

15 cars made it out for the consolation, Davey, Burt, and 228 had a coming together, then Fisher, D.Hughes and S.May had a coming together, 514 spun Davey out, then Davey returned the compliment and spun him out, there were a few more knocks and spins and 702 James Dodge took the win from, 284 Leon Benjafield, then Hooper.

22 cars qualified for the West Of England Championship. J. James shot straight from 4th on the grid to take the early lead, then Trim lost a wheel forcing a stoppage, James led the re-start from Elias, Benjafield spent a few lap pushing Clarke, then Ashley spun Benjafield out!

There were a few other knocks and spins, and Knox got stranded broadside on the turnstile bend, James went on to win from Ryan Sparkes, then 247 Richard Sparkes.

13 cars came out for the allcomers race.  Davey spun Burt around and Davey ended up in the plating and then 514 jacked Davey up, then 514 backed out, then Burt decided to jack Davey up, then 514 decided to jack them up again!!
714 Paul Smaldon and S.May had coming together, amongst a few other crashes and Dodge got spun out and 27 Dean Quinn went on to take the win from R.Bugler then, James (from pole position but a lap down).

9 cars came out for lively D/D including 262 R.Bugler who borrowed Nutley’s People Carrier. 517 Scott Weldon spun S.May and Clarke collected S.May head on! Then R.Bugler jacked Clarke up then backed out, and a lap later R.Bugler shoved Weldon into Clarke, Weldon and R.Bugler were involved in a lot of the action and the D/D ended when Mills jacked up Knox, then R.Bugler, and 228 went steaming in!! R.Bugler backed out and went in to finish them off, and R.Bugler was declared the winner.