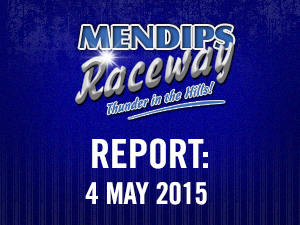 After the rain on Sunday, the sun did at least shine to begin with for the May Day Bank Holiday Monday meeting, and although it threatened towards the end it held off until after racing had finished with the racing for a three formula meeting with theBriSCA F2 Stock Cars, Bangers and Reliant Robins making up a 14 race programme.

Bank Holiday weekends are a busy time for the F2 Stock Cars and a few would be attendants were lost at meetings in previous days, but never the less, the entry stood at a 24 cars. The first event was the Rookies Reward round one for the white and yellow graded drivers and saw 828 Julian Coombes take the win. 189 Paul Butcher then won heat one and 522 Chris Mikulla heat two, which saw plenty of incident considering the number of cars on the grid. Heat three again featured two yellow flags, the second after a spectacular crash for Coombes on the back straight and into turn one. Ultimately it was 676 Neil Hooper who came through to win, with the result being declared on the last lap after 768 Tom Adcroft crashed heavily on the bottom bend. The Final was headed off by 845 Andrew Morgan until Butcher moved ahead. There was then a race suspension when 468 Sam Weston found himself stranded across the track. Butcher continued to lead after the resumption but all the while 783 James Rygor was closing in and he took up the running with five laps to go. However when 542 Steven Gilbert crashed to bring out a late yellow flag it had the potential to change everything. However, Rygor had it all covered and went on to hold off Hooper to the flag with Butcher holding on for third. Then, to complete a good day for himself, Butcher took his second win of the day in the Grand National.

The Bangers entry was split into a two from three heat format, the same as in the F2 Stock Cars and this allowed for some busy races. The first heat came down to a dramatic conclusion as 38 Kevin Styles looked set for the win only to get caught in a pile up on the last lap and 133 Jody Jeanes nipped through it all to grab the win. The second heat saw the turn of his brother, and reigning World Champion 113 Chris Jeanes to come through and win, having made up a lot of lost ground via a yellow flag. Heat three then saw a flag to flag win for 743 Jake Bond, pushed home by 109 Chris Neville. It was 743 Bond who held sway in the Final for much of the way, but he was caught and passed by 113 Jeanes with four laps go and he went on to record a heat and Final double of wins. Bond held on for second whilst 133 Jeanes grabbed third on the line from 266 Micky Ford. This meant a clean sweep of wins for the ‘The Green Team’ and top three in the Final. Not a bad day for the guys from the Somerset Levels…

There was an excellent entry of Reliant Robins and the three wheelers put on a great show in their trio of races. The first heat featured no less than seven rollovers, but was a stop-start affair as a consequence. 437 Cliff Worthington took the win and then followed it with another in heat two, getting the better of a battle with 3 Dan Tythridge, 304 Tim Weare and 49 Liam Boden, all after a one lap dash re-start. The Final again saw several rolls, including a real high flying one for 17 Peter Hurd. The feature of the race was a great scrap between 49 Boden and 304 Weare where the pair swapped and changed the lead several times and it was decided in a classic last bend move from Weare on Boden to take the win. 90 Joe Cambridge was third.