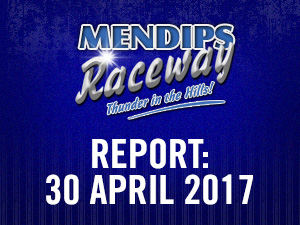 The rain started after the 1st race which was the Junior Rod race, the rain was mostly light leaving a very greasy track.

There was a good mix of cars including BMWs, Volvo Estates, Frogeye Estates and a hatch back, and a Lexus, and 954 Jamie Beere had a Granada, Dean Quinn and 502 Kai May both had Limo’s, and 363 Sam Trim had a Jaguar and 09 Mavis had a very smart MK2 Granada, and 10 Nigel Parlor had a very smart BMW 5 Series.

In the 1st Banger Heat 731 Shaun Dyer was the 1st to get spun out, and 3 Arran Wynn was getting stuck in, and there was a bit of pushing and a few other spinners including Wynn who was spun out and collected head on by Trim, then Wynn got spun out again and had a small fire, 185 Richard Coaker led the re-start and went on to win from 122 Jesse Ashley then, Beere.

In the 2nd Heat again there was a bit of pushing and quite a few spinners, and Parlor was left broad side facing the fence near the start line, and 739 Jason More lost a wheel. Buddy James led the re-start and went onto win from 246 Ryan Sparkes then, 362 Johnny James. 16 cars came out for the Consolation Race, there was a few knocks and spins and 911 James Chapman was left facing the wrong way and was accidently clipped by May, and they stopped the race for Chapman who was ok. Moore led the re-start from 262 Roona then 282 Steve Hunt, Roona shoved Moore wide for the lead, then on the last lap there was a 5 car scrap for the lead and Hunt went from 3rd to 1st to take the lead and on to win, from 278 Shaun Brokenshire, then, Roona.

In the Special Rods they run an all in Heats and Final, with lot of overtaking in all the races. There were 10 cars out for the 1st Heat, 224 Jordan Edwards took the early lead. 304 Tim Weare then manged to find a way past 444 Mark Loader and set about reeling Edwards in, then Weare caught and went round the outside of Edwards to take the lead, from 612 Dale Brace, 7 Will Harraway, 426 Russell Colenutt, and 701 Ben Brice, then Colenutt passed Harraway on the inside then Colenutt went round the outside of Brace for 2nd but Weare was too far ahead to catch, and Weare went onto win by ½ a lap from Colenutt (from 9th on the grid), then Brace, then Brice.

With two late arrivals there was 12 cars out for the 2nd Heat Edwards ½ spun at the start giving Loader the early lead then 364 Darren Feltham tried going round the outside of Loader but when Feltham had his nose ahead they touched and Feltham spun out, there was a lot of cars spun out, and Weare managed to get passed Loader for the lead, then Brace tried going round the outside of Weare and Colenutt nipped up his inside and they went side by side then Colenutt spun out, then 720 Dan Latimer went round the outside of Harraway then, Brace, then he got  nearly alongside Weare then, Latimer spun around and was collected by Brace, Weare went on to take the win from Harraway, then, 993 Darren Foss, then Brice.

11 cars came out for the grand National with Colenutt starting in pole but a lap down, Loader found a way past Edwards for the early lead, then Weare went round the outside of Loader and Weare built up a big lead, and Brice managed to get from 10th to 2nd then set about reeling in Weare, and Colenutt managed to get up to 4th from his lap handicap, then Colenutt, and Harraway, went round the outside of Latimer, then Colenutt left the door open and Harraway didn’t need a second invite, Weare went onto take the win from Brice, then, Harraway then Colenutt.

23 Junior Rods turned up with a lot of close racing and overtaking. They were running a 2/3rds format with a qualifiers only Final. In the 1st Heat 599 Lewis White took the early lead from pole, then 100 Thomas Weeks came from 5th to take the lead from 149 Ieuan Preston, then 11 Jake Devine and 36 Josh Weare (from 13th on the grid) then Preston went wide and Devine and Weare didn’t need a 2nd invite then Weare nipped up the inside of Devine and Weeks to take the lead, 285 Jacob Anderson was doing well until he had coming together with Devine. Weare went on to win from Preston then 88 Charlie Pearce (from 15th on the grid).

In the 2nd heat White quickly got from 4th to take the early lead from Preston, then 28 Ava Hawkins, then 53 Angus Hawkins and 111 Millie Ruby both had a spins, then later on Ruby hit the wall. Near then end of the race Ava Hawkins spun out of 3rd, then Weare got up to 2nd, then White and Weare had a coming together in front of 190 Ewan Gumbleton, and 376 Danial Kent nipped past all three of them to take the lead then on to win from, Gumbleton, then, Weare.

In the 3rd Heat Weeks took the early lead from 730 Taylor Sealy, and Pearce and Anderson was going well mostly on the outside, and one point Pearce was going 3 abreast!! Until Pearce spun out in front of Anderson, later in the race Gumbleton and 34 Cameron Mc Colm went round the outside of Sealy, then Weeks to take the lead the Gumbleton went wide and Mc Colm didn’t need a 2nd invite to take the lead then on to win from, Gumbleton, then Anderson, then Kent.

15 cars came out for the Final 77 Jacob Filer broke down on the rolling lap, Preston took the early lead from 75 Jack Buckingham then Sealy, then Sealy broke down, and with two laps left 854 Jack Sear nipped up the inside of Buckingham for 2nd, and on the last lap Sear tried to nip up the inside of Preston, and the 1st five cars crossed the line in a bunch 2 and 3 abreast, Preston was declared the winner from Sear, then, Pearce then Kent.