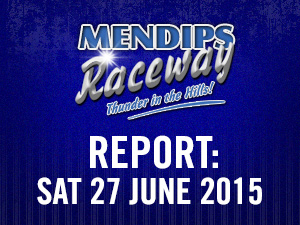 It was a warm and dry evening with a dry track, for the Bangers British Beef, Mascars, Hot Rods, and Reliant Robins.

The majority of the Bangers were well presented, with a good mix of cars including Capris, Cortinas, Sierras Saloon, Hatchback and a Estate and 77 Paxti Beasley had a Ford Taunus Coupe. The Top Tin Award’s went to 444 Kieran Bellringer in a Sierra Estate, 959 Aaron Keoghan in a Cortina Estate, and 420 Lee Jones in a Cortina.

As they were only 20 Bangers, the British Beef Final was run as the 1st race. 256 Jamie Turner led from pole and 54 Tom Davey was at the front of a small pile up on the pit bend, 363 Sam Trim was dishing it out, and 420 Lee Jones, 58 Martin Dalton, 444 Keiran Bellringer, 130 Dan Cook, 959 Aaron Keoghan, got spun out at least once during the race. Turner went on to take the win, from Trim, then 517 Scott Weldon. 17 cars made it out for the 2nd race Jones got pushed onto the infield as the green flag dropped and Keoghan got spun out, then 314 Jason Barraclough, and 323 Dean Kelly got spun out, then Jones then put 146 Steve Voss away , and then they had some fun and games, then the race was stopped. Dalton led the re-start from Trim, Weldon, and Davey, as soon as the green flag dropped Davey switched straight to the outside line to pass Weldon, and Trim, but they went wide forcing Davey into the fence, and causing him to retire!! 270 Slug then spun Jones on the pit bend, then 252 Boogie picked up Slug on the back straight dumping Slug into the plating! 200 Brian Pugsley spun 266 Micky Ford out, and then Barraclough spun Pugsley out, and also Boogie spun Keoghan out!! Weldon went onto take the win from 440 Macauley Mills then Trim. Only 10 cars made it out for the all comers race, into a D/D. Boogie managed to spin two cars out on the pit bend, and Keoghan spun out and Weldon done very well to avoid a head on!! Davey took the win from Beasley, then Boogie . Mills, Barraclough, Boogie 77 Patxi Beasley, and Keoghan was the only runners for the D/D which ended with Beasley giving Barraclough a massive jacking!! Then Beasley and Keoghan having a head on killing both cars!! Beasley was declared the winner for the one putting in the biggest hits.

There was a good entry of 15 Mascars which provided a lot of close racing with a lot of overtaking and dicing for positions, and in the 1st heat they even got 3 abreast!! 42 Andy Williams led from pole with 37 Ady Pickerill quickly into 2nd from76 Dan Peters then 11 Juli Stanford, 30 Alec Sharp had a spin, then 22 Steve Stanford spun in front of 25 Robin Bath for the 1st stoppage. Williams led the re-start from, Pickerill, 46 Stewart Simmonds 01 Aaron Cooke, and 28 Nathan bath. On the re-start Cooke and N.Bath went both sides of Simmonds to relieve him of 3rd, then Simmonds got spun out causing another stoppage. Williams led the re-start from Cooke, Pickerill, then N.Bath, N.Bath then found a way passed Pickerill, then nipped up the inside of Cooke then had a tank slapper an accidently squeezed Cooke into the wall. N.Bath was then black flagged, Willams went onto take the win, from 65 Mark Carnwell(from 14th on the grid), then Pickerill. In the 2nd heat, 25 R.Bath out dragged pole sitter 11 J.Stanford for the lead from Peters, then Cooke, Carwell then nipped up the inside of Cooke then flicked to the outside line to pass Peters, with Simmonds closley behind J.Stanford then dropped down the order, and Simmonds got past Carnwell. Cooke then pulled off with a suspect fire, causing the 1st stoppage. R.Bath led the re-start from Simmonds, then Carnwell. 25 R.Bath then pulled out a big lead and went onto win from Simmonds then Carnwell (from 9th on the grid). 12 cars made it out for the Final 75 Russ Best led from pole, from J.Stanford , and Simmonds quickly got up to 3rd from7th on the grid, then Simmonds found a way past J.Stanford, then Best had to retire with a flat, giving Simmonds the lead. Simmonds, J.Stanford, R.Bath, and Carnwell built a gap to 5th place going nose-to-tail, then R.Bath spun out and was nearly collected by N.Bath!! In the last few laps N.Bath caught the leading pack, and on the last lap Carnwell tried the outside of J.Stanford, but N.Bath nipped up his inside and Carnwell and N.Bath crossed the line side-by-side. Simmonds took the win from J.Stanford then Carnwell.

There were 8 Hot Rods in the 1st Heat 125 Mike Hibberd quickly found a way round the outside of 278 Maurice Cole then 35 Neil Muddle to take the lead with 788 Mark Shelper, and 258 James Griggs also passing Cole and Muddle round the outside for 2nd and 3rd, then Griggs and 205 Mike Norton found a way past Griggs and Cole, then Norton and Griggs had a coming together and Griggs spun out. Hibberd and Shelper had built up a big lead. Hibberd went onto take the win from Shelper then 282 Steve Hunt. In the 2nd Heat Hunt led from pole from Norton, Griggs, Shelper, and Hibberd. The 5 off them built up a big lead following each other nose-to-tail. The backmarker Muddle spun out in front of Hibberd. Hibberd had a few attempts to go round the outside of Shelper, and for the last couple of laps they spent side-by-side but Shelper pipped Hibberd to the post! Hunt took the win from Norton then Griggs. In the Final Cole tried to go round the outside of pole sitter Muddle and they did a few laps side-by-side then Cole brushed the fence forcing him to drop back, then Griggs, Hibberd ,and Norton then went round the outside of Cole, and Muddle to take the 1st three places. Cole and Muddle then had a coming together sending Muddle into the inner fencing causing a stoppage. Griggs led the restart from Norton, then Hibberd, then Hunt from 7th on the grid. The four of them built up a gap following nose-to-tail. Hunt managed to find a way past Hibberd, then Norton spun in front of Hunt giving Hunt 2nd. Griggs went onto take the win from Hunt, then Hibberd, then Shelper.