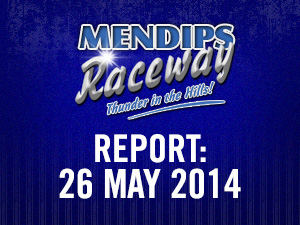 The Special Rods were running a 2/3rds format with an all in Final, with some very close and competitive racing. There was 13 cars out for the 1st heat and 35 Mark Johns out dragged 26 Andy Bennet for the lead, then Bennet found a way past Johns to re-take the lead, with 136 Jason Horseman up to 3rd and 122 Joe Rowe quickly into 4th. Horseman then Rowe and 18 Russ Colenut found a way past Johns. There was a big battle for 3rd involving Rowe, 47 Richard Howard ,and Colenut, and 23 Ross Stuckey amongst others, and when Colenut and R.Howard was side-by-side Colenut and R.Howard tangled causing them both to retire! Bennet took the win from Rowe then Horseman, then Stuckey.

11 cars came out for the 2nd Heat Bennet out dragged pole sitter 324 Paul Frankland to take the lead. 720 Dan Latimer found a way past 5 Alan Lettley then Frankland to take 2nd, and 304 Tim Weare and 41 Dene Howard quickly got into 4th and 5th Weare tried to go round the outside of Frankland and 41 D.Howard nipped up his inside of Weare and Frankland. Colenutt was making good progress until 8 Andy Russell got turned around scattering the pack with Colenutt and 85 Andy Pincott losing a lot of places. Then a few laps later Colenutt and Pincott had a coming together forcing them both to retire. Bennet went on to win from D.Howard, then Weare, then Latimer. There were 13 cars in the 3rd heat and Johns out dragged pole sitter Frankland for the lead. There was a lot of place swapping behind Frankland then 51 Rob Price found a way past Frankland to relieve him of 2nd followed by Weare, Rowe, and R.Howard, then Rowe had a spin. R.Howard found a way passed Weare, and 51 Rob Price reeled in and passed Johns followed by R.Howard and, Weare. Price took the win from R.Howard then Weare. 17 cars came out for the Final Johns again outdragged pole sitter Frankland for the lead followed by Bennet, and Russell, then Bennet and Russell found a way past Johns to relieve him of the lead. Weare and D.Howard, and Rowe was making good progress, and Price was spun out, then D.Howard and 7 Will Harraway had a coming together! Colenutt was flying from last on the grid and was up to 3rd by the 1/2 way mark then he went round the outside of Russell then Bennet to take the lead. Within the last 3 laps Pincott and R.Howard went round the outside of Bennet. Colenutt went onto win from Pincott then R.Howard.

The Junior Rods were also running a 2/3rds format with an all in Final, with some very close and competitive racing all afternoon. There 10 cars out for the 1st Heat 784 Henry Murray shot straight into the lead from pole position and quickly built up a big lead. 16 Kierren Gardiner broke down leaving 62 Lisa Stevenson trapped behind causing a stoppage. On the re-start Murray lead from 34 Cameron McColm, 66 Becky Pearce, 87 Callum Richards then 700 Ben Brice, and Pearce went straight round the outside of Mc Colm followed by Richards and Brice. After a few attempts Richards eventually found a way around the outside of Pearce to relieve her of 2nd place. Richards then reeled in Murray but couldn't find a way past, and Brice eventually found a way past Pearce for 3rd. Murray went on to take the win from Richards, then Brice, then Pearce, and Mc colm.

There were 10 cars out for the 2nd Heat Mc Colm quickly got up from 3rd to relieve 62 L.Stevenson of the lead. Then 258 Deane Hughes found a way past Mc Colm to take the lead .Brice quickly got into 3rd, and passed Mc Colm then Hughes to take the lead, on the last lap 362 Aaron Loader nipped up the inside of 190 Ewan Gumbleton and 956 Harry Thompson for 3rd. Brice went onto take the win from Mc Colm then Loader. There were 13 cars out for the 3rd Heat Murray shot straight into the lead from 3rd on the grid, and quickly built up a big lead from Pearce then 240 Rachel Bowering. Thompson, Richards and Gumbleton were making good progress from near the back. As they were going through the back markers Thompson and Richards found a way past Bowering. Murray went onto to take the win from Pearce, then Thompson, and Loader made it up to 6th from last. There were 15 cars out for the Final Murray quickly got upto the lead from 4th on the grid followed by Gardiner, Pearce and Bowering, Thompson and Richards. Pearce relieved Gardiner of 2nd, and Thompson and Richards eventually found a way past Bowering, and Gardiner, and Loader got up to 4th and nipped up the inside of Thompson then Pearce for 2nd followed by Richards. Murray went on to take the win Loader then Richards, and Pearce.

There were 10 Hot Rods with them running all in for their races. With some good battles throughout the field all afternoon. In the 1st Heat 718 Colin White was flying from the back of the grid. 117 Dave Tossell took the early lead from pole, from 258 James Griggs, then Tossell broke down resulting in a re-start and giving Griggs the lead from 205 Mike Norton. Griggs then built up a big lead from Norton, and 125 Mike Hibberd and White went round the outside of 18 Larry Langmead, then Hibberd tried to go round the outside of 788 Mark Shelper and White nipped up the inside of Hibberd and switched to the outside of Shelper, and after a few laps White managed to get passed Shelper for 3rd. White tried to reel in Norton but run out of laps. Hibberd tried a few times to go round the outside of 788 but couldn’t make it stick. Griggs went on to win from Norton then White.

In the2nd Heat 55 Alistair Lowe took the early lead from pole and Hibberd managed to get round the outside of 35 Neil Muddle for 2nd, and White went round the outside of Langmead then Muddle for 3rd. Hibberd managed to reel in Lowe, and as Hibberd was trying to pass Lowe they had a coming together forcing them both to retire, giving the lead to White. and when Shelper was trying to go round the outside of Muddle they just brushed each other sending them both into a1/2 spin. White went onto take the win from Langmead then, Griggs. In the Final Hibberd took the early lead from pole and built a ½ a lap lead from Muddle. They was a lot of place swapping further back, and White managed to work his way up from 8th to 2nd mostly on the outside with 5 laps to go then had to reel in Hibberd. White managed to catch and get on the outside Hibberd whilst they was making their way through the backmarkers and after a lap side-by-side White managed to take the lead and the win from Hibberd then, Lowe and Langmead.

Only 11 Bangers turned up for their World Championship Qualifier with them running a all in format for their races. The Top tin Awards went to 146 Steve Voss in a Volvo Estate and 440 Macauley Mills in a Limo. In the 1st heat 329 Kevin Ealson and 114 Liam Lake spun out and 146 Voss and 40 Pete Stanley retired. 739 Jason Moore won from pole from 54 Tom Davey then 517 Scott Weldon. In the 2nd Heat Moore took the early lead, and 270 Slug retired. Weldon spun Voss out, and later on Stanley, Ealson, Weldon, and 27 Dean Quinn had a play! Quinn tried to spin Ealson but Ealson managed to hang on, and when Voss spun Weldon out, Voss had a small jacking from Stanley! Davey caught and knocked Moore wide for the lead and Moore returned the compliment on the next corner, and they exchanged the lead a few times before Davey spun Moore out and took the lead. Davey went on to win from Moore then Weldon. In the Final Lake spun out Weldon, and Slug and Quinn retired. Weldon squeezed Ealson into the plating and Ealson’s wheel was hanging on by a thread, and after a few laps Ealson’s wheel fell off!! Davey was again flying and soon got into 3rd and punted Lake wide to take 2nd. Moore went on to take the win from pole from Davey then Lake. Only 7 cars came out for the Allcomers Race. Weldon spun Quinn out near the finish line, and Moore took the win from pole from Davey, then Weldon.