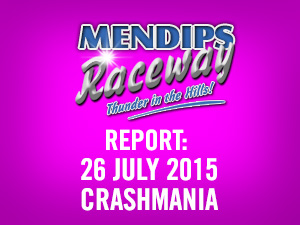 The weather probably couldn’t have been any worse for the July meeting, with heavy rain and strong winds in the morning and whilst both did abate during the course of the afternoon it was never likely to produce dry track running.  That said, the three classes on duty put on a great show with some good racing for the BriSCA F2 Stock Cars, the Bangers annual team meeting and Special Rods.
It was a bigger shame for the conditions that the day was set on the backdrop of charity fundraising in aid of cancer research, remembering our much missed friends Lesley Maidment and Phil Cleverley.  The show went ahead as planned though with the annual bike race – won by Lee Radford – and tyre tossing on the centre taking place before the racing got underway.

Considering the BriSCA F2 Stock Cars are in the midst of a busy spell of racing, and car counts are taking a huge hit nationally, we were pleased with the 26 car total that was in attendance, especially factoring in the weather.   It included a visit from the World Champion 1 George MacMillan, but it was to be a day he will want to put behind him as he retired from his first heat and didn’t reappear.

The first race was for the third round of the Rookies Reward for white and yellow graded drivers and it saw 528 Shane Hector take the victory, fending off 845 Andrew Morgan.  The first heat of the full meeting for 126 Jamie Avery take the win before 676 Neil Hooper won heats two and three.

The heavy rain returned briefly prior to the Pink Ribbon Trophy Final and 111 Lewis Geach made light work of the yellow and blue grade ahead by leading on the second lap and he started to pull clear.  However, two yellow flag periods, both for stranded cars on turn four brought the pack close to him.  Both times though, he simply pulled away again and went on to take the win.  This was his first Final win since his return after a nine year lay-off.   126 Jamie Avery was second across the line but was docked four places for failing to start at the rear of the red grade as a heat winner.  This promoted 542 Steven Gilbert to his third second place of the day and 676 Hooper was unable to make it a hat-trick of wins with third.

The Grand National saw a win for 979 Paul Moss.   There were extra grade awards on the day, which encompassed the entire meeting which included vouchers from Shock-Tec and a Yokohama Tyre courtesy of Harding Race Engines.  Alas, no white graded drivers scored any points during the day and thus no grade award for them but the yellow went to 979 Moss, blue to 254 Richard Beere and star/superstar to 676 Hooper.   For the first time in many years, the track championship is looking close for the F2’s too, and set to go all the way to the last meeting for them in September.

There was a total of 54 (Rookie) Bangers in 16 teams for Flio’s Crashmania, although several failed to field a full quota of four cars, it did make for a busy session with plenty going on throughout.

The first heat ultimately set the tone for the day with 83 Ben Styles winning for “Pistonbroke” whilst heat two saw the only transgression of the day when 70 Jamie Thomas and 54 Tom Davey clashed, which resulted in the former disqualified from the rest of the meeting.  881 Gary Emery won for 2014 victors “Balls Out”.

Heat three saw a maximum score for “Pistonbroke” when 109 Chris Neville headed won 83 Styles and then heat four it was a maximum for “Balls Out” with 938 Ashley Rice leading home Emery but with the “Pistonbroke” duo third and fourth it meant that they were in an almost unassailable lead heading into the ‘A’ Final.  The ‘B’ Final had a small field of cars and was won by 505 Sam May from “Rough and Ready”.   109 Neville was the early leader in the ‘A’ Final but retired early on and then it was 107 Dan Chiplen for the “Pink Ribbons” who took over and he held sway until he crashed out.  881 Emery took over and went on to win for “Balls Out” but with 38 Kevin Styles and 83 Ben second and third it more than sealed victory for them – and they, along with Neville and 54 Davey were the winners.  “Balls Out” were second and the “Pink Ribbons” which were a man down and included F2 drivers 797 Dan Moss and 935 Nathan Maidment a credible third.

The Special Rods put on a quartet of good and close races, despite the track conditions and their overall points championship remains as tight as ever.   One who is starting to look like he will be in the mix come the end, 720 Dan Latimer took heat one after fending off 41 Dene Howard to the flag.

Heat two saw 701 Ben Brice, in his first meeting since stepping up from Junior Rods lead all the way to the first last corner when he spun under pressure from those behind, and 122 Joe Rowe nipped through to take the victory.

The Final saw Brice lead and then pull clear and was never caught on his way to his first adult class victory, and even better with it being the days main race.  720 Latimer made second whilst 192 Ashley Raymond was very unlucky to spin about a meter from the line whilst running third which promoted 993 Darren Foss to the win.  The latter then rounded out the day with a win in the Grand National.   Numbers maybe lower in the Sierras this season, but, as we say the racing remains as close and competitive as ever.