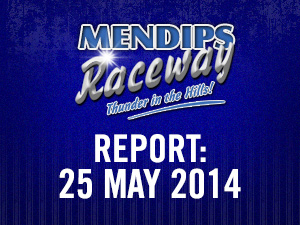 The first of the two meetings over the Bank Holiday weekend proved to be a very blustery one, but it kept any showers away and the good sized crowd on hand were treated to a day of plenty of entertainment from the BriSCA F2 Stock Cars, Reliant Robins and National Bangers.

With the clashing meeting at St Day, numbers were always going to be down on the norm in the F2 Stock Cars, but we were satisfied with what we had present.  The second round of the Rookies Reward saw a first win for 937 Matt Issacs.  The in heats one and two 886 Chris Bradbury came to the fore and took the victories.  Could he make it a hat-trick on the day and a hat-trick of Finals this year?

Issacs opened out a good lead early on but this was eroded when there was a yellow flag with 91 Brett Constable stranded.  His lead continued after the re-start but Bradbury had got himself ahead of his fellow star men and looked to be in a good position to challenge.  However, he tangled with the back-marking 104 Shaun Robinson which lost him ground and at the same time 700 Adam Rubery seized the opportunity to make his move on 522 Chris Mikulla.  All of this was behind Issacs who held sway at the front.  However, he lost time behind back-marking traffic and this allowed Rubery to catch and pass in the closing stages and he went on to win.  Mikulla was second and Bradbury third.  Bradbury completed his hat-trick in the Grand National.

The Reliant Robins were on their annual ‘Crazy Day’ and also the third round of Midlands Mayhem Series.  This saw some visiting interest from East Anglia and the Midlands in an impressive entry of 23 cars.  The first race saw plenty of action and rollovers and also subsequent yellow flag periods.  This set up a two lap dash re-start, but 445 Niki Loader held on for the victory.  The second race was the anti-clockwise race and with the weight distribution all wrong, this made the huge difference in speed – just as it does every year.  However, 437 Cliff Worthington mastered it the best and took the win.  The Pairs race produced plenty of high entertainment and a dramatic finish when 99 Steve Chappell and 100 Jerry Weeks pipped 664 Ryan Sutcliffe and 702 Allen Cooper.  With the good entry and entertainment taken into account, an Allcomers race was added to the programme and was won by 702 Cooper, in fine style too.

16 under 1800cc National Bangers, all of them Ford Mondeo’s but, proof that a huge field isn’t always needed, there was always plenty going on throughout their quartet of races.  The first saw some action on the top bend between 176 Ben King, 55 Alan Machin and 189 Jamie Knox whilst 54 Tom Davey came from the back of the grid to the front to take the win.   The battle between 176 King and the Bristol Black’s continued in heat two and culminated in a crunching head-on between he and 129 Lee Dalton.  On her track debut 669 Stacey Holdsworth took the win.   The Final saw both Stacey and fellow lady racer 712 Carl Gabriel open out a good lead on the rest and for much of the way it looked like they could head for a historic 1-2.  However, Davey got amongst them in the closing laps and sent Holdsworth spinning but just ran out of time to get hold of Gabriel, who thus took her first win.  40 Pete Stanley rounded out the top three.   Davey took his second win of the afternoon in the Allcomers whilst 129 Dalton literally outlasted them all to win the DD.