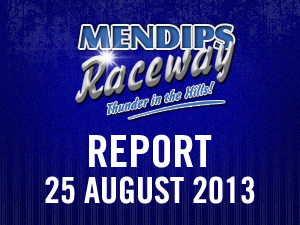 With Banger and Special Rods both having two days of racing, the pits were very full as Sunday’s meeting got underway, and the promised sunshine was not in evidence until much later in the day. The Juniors were the third formula, but the meeting kicked off with the FORDS Charity Mechanics Race, where the pole position was achieved by the amount of sponsorship the driver raised, and so it was that Mr Starter, Andy Chant, led them off. That didn’t last long, as he had been involved in plenty of banter before the meeting, and was a target for all the drivers, and endured several spins! Ty Mc Laughlin (27) led for most of the race, but was pipped at the post by Chris Neville(209), but a simply huge amount of over £1300 was raised for the Fund for Oval Racing Drivers and Staff!

The Juniors heats were won by Sophie Harris(39) her first ever win, on the back of several months of really bad luck and crashes, followed home by Becky Pearce(66), and by Dan Milverton(16), with Ben Brice bring his Austin A 40 home second. More girl power held sway in the Consolation, where debutant Rachel Bowering(240) took the top honours in her Fiesta. The Final was well won by Milverton, although and unfortunate clash between Sophie Harris and Callum Richards(87) terminated Richards challenge and allowed Aaron Loader (362) to close the gap in the Points championship.

The Special Rods were contesting Rounds Two and Three of the Somerset Surfacing Summer Series, which was a competition whereby each grade had a special award for points scored over the three meetings. Competition was, as always, fierce, and after heat wins by Paul Barnes (210) and Championship leader Richard Howard (47), Russ Colenutt(18) needed to qualify  via the Consolation, setting up the scene for the Final, but is was neither of these that took the chequered flag, but Dene Howard(41) who once again saved his best performance for the big race. Great joy for Andy Wadley (6) who won the Grand National event- his first win, and such was the pace that that none of the superstars featured in the top five places!

With 63 bangers ready for action, there was plenty going on in this limited contact class, and once again it was the visiting drivers who did most of the winning, with Ben Sealey(475) taking a heat and Final double, followed home by team mate Chris Jeanes (133) on both occasions. There was a home win in the Allcomers, though when Paul Mortimer led from start to finish.