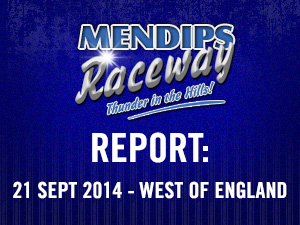 The penultimate meeting of the season at Mendips Raceway came, but with it one of the highlights of 2014 with the return of the National Hot Rods. The Junior Rods reached the conclusion of their season and likewise the National Bangers, who were in unlimited form and with it a World Championship qualifying round.

The National Hot Rods were in the third round of their 2014-15 World Series, which is actually shorter this time around at 10 rounds and thus it makes every race, and point even more significant. Following the success of the round at this corresponding meeting last year, it was good to see that the entry was actually two up on that, at 25 cars with drivers from all over the country including mammoth journey’s from Scotland from 117 Rob McDonald and 629 John Sibbald.

With a veteran who knows his way around Mendips Raceway well, in 734 Ralph Sanders starting from the front group throughout the day the rest were always going to be up against it. The Exeter man duly went on to win heat one and then in heat two 161 Daniel Holden came through to take the win.

The third heat proved to be a scruffy and controversial affair. Sanders was the leader until there was a yellow flag called with 27 Mikey Godfrey spun on the pits bend. Sanders found himself under immense pressure after the resumption and 161 Holden and 629 Sibbald crashed in their battle for second, which brought out another yellow flag and then to add to the drama, several crashed and bumped into each other under the caution. Sanders retired at this point too.

305 Billy Woo assumed the lead, but he had race damage that appeared to hold him up at the re-start and he clashed with 92 Jack Blood and spun. Blood went on to win but was subsequently docked two places for his part in Wood’s demise and it was 162 Carl Waller-Barrett who took the victory.

The Final saw Sanders lead all 35 laps and even withheld the pressure from a second half yellow flag after McDonald’s car parted company with a front wheel. 316 Paul Frost was safe in second whilst the main battle was for third with 629 Sibbald holding off a whole gaggle of cars all the way to the flag.

The Junior Rods had it all to play for, not only for the point battle but also the West of England Championship where the points from the heats would determine how they lined up. There was a messy start to the first heat when 12 Levi Thame spun and was collected by 362 Aaron Loader.

Although the latter returned to the track for heat two, he retired and this meant an end to his points championship reign. 300 Charlie Ayles came through to lead after the re-start and went on to win and then made it two from two in heat two, whilst a last corner clash between 87 Callum Richards and 285 Jacob Anderson saw the latter left spun merely inches from the line whilst Richards was penalised.

Heat three was all about a battle between 66 Becky Pearce and 190 Ewan Gumbleton with the 190 car leading until just before the last lap when he ran wide and 66 went through on the inside to lead and win. Ayles quickly converted his pole position to the lead in the Final, although a little too quickly as he earned a black cross for breaking rank too soon. From then on it was a case of him pulling further and further clear.

To her credit, Pearce did keep the blue Nissan in her sights but by the end of the race Ayles had lapped many and was clear in the lead. His black cross was deemed a warning and he took the title. Pearce was second and 700 Ben Brice third, who got the better of that battle decided on the last lap which ended in 240 Rachel Bowring spinning. However, there was consolation prize for Rachel as she was awarded the most improved driver for 2014 whilst the points sensationally ended on a tie with Ayles and Brice ending up level on points.

With clashing meetings and various other factors, there was never likely to be a large entry for the National Bangers, and the last
World Championship qualifying round for Ipswich next month. That particular chase was close and two of them well in that, 517 Scott Weldon and 114 Liam Lake came through for first and second whilst the action centred on the stretch Limo of 108 Richard Pearce who got involved with 77 Paxti Beasley and 284 Leon Benjafield.

Lake was clear in heat two but retired towards the closing stages, which was something that would ultimately cost him dearly. Weldon inherited the lead and went on to win again. However, it was the 517 car who retired from the Final early on and Lake went on to win ahead of 40 Pete Stanley and 739 Jason Moore. With Weldon’s position at the head of the qualifying points safe, it was between Lake and Moore for the other seeded place into to the big event next month. Lake went on to win, but with Moore second this was enough for him to get the place, thus Lake’s retirement from heat two was his undoing.

The DD came down to three cars with Beasley gamely keeping his car in the line of fire long after it had seen its last and when Weldon’s car expired it was left to his fellow veteran in a Jag, 40 Stanley who took the win.