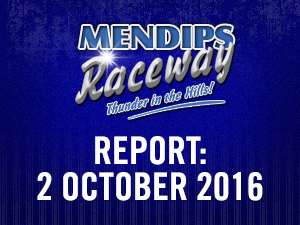 It was a warm and sunny day for the West of England Championship for the Old Skool Unlimited Bangers, Special Rods, and Junior Rods. The track started off a bit damp in places after the previous day’s rain.

There were 28 Bangers turned up and they were running a 2/3rds format with an all in Final, for the Unlimited National Bangers Old Skool West of England Championship. The Top Tin Awards went to 314 Jason Barraclough in a Hearse, and 440 Macauley Mills in a Granada.

There was a good mix of cars including 242 John Quinn in a limo, 7 Aaron Charles in a Lexus, 199 Tom Pearce in a Mercedes, 517 Scott Weldon in a Jaguar, and 778 Paul May in a Vauxhall Omega Estate, 362 Aaron Loader in a very smart Volvo Estate, and a lot of BMWs amongst other cars.

In the 1st Banger Heat 228 Matt Fall (Splat) got spat out of the pack and hit the wall, and Loader, 278 Shaun Brookenshire, Splat, was 462 Callum James amongst the few people to get spun out. 262 Buddy James took the early lead before 185 Richard Coaker forced his way past to take the lead then on to win, from 382 Danny Hunt, then B.James.

In the 3rd Heat 148 Reece Frayne, Bond, Weldon, and C.James all got spun out, Weldon also spun out J.Quinn, and Pearce, Mills went on to take the win.

In the West of England Championship Final 20 cars came out B.James took the early lead, and Splat, and C.James was the head of the train in to the turnstyle bend fence which triggered of a chain reaction with a lot of big hits and a lot of action on the turnstyle bend which took out 14 cars and the race had to be stopped for a driver who thankfully was just winded!!

Only four cars made the re-start, Courtier shoved past May then May ½ spun Courtier who was then stranded across the track for another stoppage, on the re-start 282 Steve Hunt, and 256 Jamie Turner were having fun and games then beached each other on the infield, leaving May (Bod) the only car running!!!

When the track Points Championship was calculated, Dean Quinn (27) and Macauley Mills(440) were found to have equal points, so there will be two silver roofs in 2017!

14 cars came out for the 1st Heat pole sitter 364 Darren Feltham went side by side with 224 Jordan Edwards for a few laps before he took the lead, 5 Alan Lettley quickly got up to 2nd from 4th on the grid then went round the outside of Feltham for the lead, 444 Mark Loader spun on the pit bend which scattered the pack, then Edwards was the head of a four car battle for 2nd, further back 244 Dale Edwards had made his was up from 12th on the grid to 3rd, then with one lap to go D.Edwards spun out, Lettley crossed the line first but was docked 2 places for a jump start, giving 108 Steve Brown the win from, 41 Dene Howard, then, Lettley.

12 cars came out for the 3rd Heat Loader took the early lead from pole from Murray, then Horseman, and Murray spun out in front of Horseman, and 304 Tim Weare quickly got up to 2nd, then Weare went round the outside of Loader, for the lead, D.Edwards quickly got up to 3rd and found a way past Loader then went round the outside of Weare to take the lead, and further back Horseman got squeezed onto the wall, then Pincott managed to get up to 2nd, from 426 Russ Colenutt, with 2 laps to go and Colenutt went round the outside of Pincott then D.Edwards, and Colenutt and D.Edwards crossed the line side-by-side! D.Edwards was docked 2 places for contact earlier in the race so Colenutt (from last on the grid) took the win from, Pincott (from 11th on the grid), then D.Edwards.

16 cars came out for the West Of England Championship Final Pincott took over ¾ of a lap to out drag pole sitter D.Howard for the lead and Colenutt eventually outdragged Brice to take 3rd, Pincott went on to take the win by just over the length of the straight, from D. Howards, Colenut. This result gave Andy Pincott enough points to win the Track Points Championship.

The Junior Rods were also running a 2/3rds format with a the top 16 drivers going into the Finl, with the highest point scorer taking pole etc. and they also had a lot of close battles and a lot overtaking.

There were 17 cars out for the 1st Heat 70 Amie Trott led from pole and and quickly built up a big lead, and 35 Charlie Johns quickly got up to 2nd from 6th, from 75 Jack Buckingham, then 190 Ewan Gumbleton and 108 Adam Headland quickly into 4th and 5th from 13th and 14th  on the grid, then Gumbleton , Headland, and 854 Jack Sear went round the outside of Buckingham for 3rd, then Trott spun out of the lead, and Gumbleton found a way past Johns for the lead, and 111 Millie Ruby, Headland, and Buckingham all had full or ½ spins on separate occasions on the pit bend, Gumbleton went onto win from, Johns, then Sear(from 12th on the grid).

16 cars came out for the 2nd Heat 21 Kyan Passco out dragged pole sitter 28 Ava Hawkins for the early lead, and 34 Cameron Mc Colm quickly got into 2nd from 5th , from 29 Jasmine Mc Ardle then Gumbleton who was quick up to 4th from the Red Grade, then Mc Colm went round the outside of Passco to relive Passco of the lead, then Gumbleton went round the outside of 29 Mc Ardle to take 2nd, then Ruby broke down so there was a stoppage to remove the stricken car, Mc Colm led the re-start from Gumbleton, and the lead two built up a gap to 3rd, Gumbleton had a lot of attempts to pass Mc Colm inside and out, and even going 3 wide at one point as Gumbleton was trying the outside line whilst Mc Colm was going round the outside of a backmarker!!  then Mc Colm eventually went wide and Gumbleton didn’t need a 2nd invite to take the lead and on to win, from Mc Colm, then, Sear, but Mc Colm was docked 1 place so Sear was given 2nd.

Only 14 cars made it out for the 3rd Heat 53 Angus Hawkins outdragged polesitter 8 George Jenkins to take the early lead before Johns went round the outside to take the lead from 4th on the grid Mc Colm, with Headland, and 66 Becky Pearce quickly up to 3rd and 4th from near the back of the grid, as Mc Colm tried to go round the outside of Johns,  Headland nipped up his inside with B.Pearce closely behind with Mc Colm holding the outside line for a lot of laps then Mc Colm, Headland, and B.Pearce had a coming together and all 3 ended up in the fence and the race was stopped and Johns was declared the winner from Headland then B.Pearce.

In the West Of England Final 16 cars came out. Gumbleton led from pole and Headland outdragged Sear to take 2nd then Headland found a way past Johns for 2nd, then Gumbleton went wide trying to pass a backmarker and Headland didn’t need a 2nd invite to nip up his inside and the two of them went side by side for a few laps then Gumbleton boxed Headland in with a backmarker to secure the lead. Gumbleton went on to take the win from, Headland, then B.Pearce. This gave 66 Becky Pearce enough points to take the Track Championship, and 101 Jack Mintram was declared this seasons most improved driver.