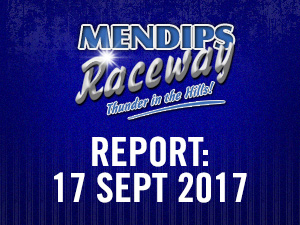 It was a dry afternoon, and with dry track conditions. Brad Hunt, Ben Brice and Andy Howard were all racing in the Bangers and Special Rods.

22 Special Rods turned up with a lot of close racing and overtaking. They were running a 2/3rds Format with a qualifiers only Final, with the highest point scorer in the Heats getting pole position etc. In the 1st Heat 224 Jordan Edwards took the early lead from pole then 6 Tim Bristow found a way past 50 Billy Garrett and 595 Ben Wall, then Bristow went round the outside of J. Edwards to take the lead, then 81 Andy Hawkins got very sideways and in the confusion 244 Dale Edward’s front end got stoved in!! Bristow led the re-start from 75 Gary Hunt then Hawkins, then 304 Tim Weare found a way past Hawkins, G.Hunt, then Bristow to take the lead, then Weare built up a big lead, from Bristow then Hawkins found a way past G.Hunt, further back 7 Will Harraway and 426 Russell Colenutt was having a great scrap and Colenutt got the break and worked his way up to  4th, and  there was a four car scrap for 2nd, then Colenutt nipped up the inside of Hawkins then switched to the outside of Bristow just as Hawkins got back on his outside and as they was 3 abreast Hawkins clipped the wall, Weare went onto take the win from Bristow, then 41 Dene Howard, then Colenutt(from 16th on the grid), then Hawkins. D.Edwards managed to repair his earlier damage in time for the 2nd heat Garrett took the lead from 775 Brad Hunt, then D.Edwards quickly got from 6th to 3rd then at the ½ way mark D.Edwards passed B.Hunt then Garrett on the inside to take the lead and built up a big lead then B.Hunt passed Garrett for 3rd, then 701 Ben Brice went round the outside of Bristow and nipped up the inside of B.Hunt for 2nd, closely followed by D.Howard, then on the last lap D.Howard got on the outside of Brice and they crossed the line side-by-side, and Brice beat D.Howard by ½ a car length, D.Edwards won by a length of a straight from, Brice, then D.Howard(from 12th on the grid). In the 3rd Heat B.Hunt built up a big lead from pole from J.Edwards, then there was a 3 car crash involving Brice and 46, Angie Harris, and someone else, forcing Brice to retire with damage, then 612 Dale Brace got up to 3rd (from 8th) then Brace went round the outside of J.Edwards for 2nd then Brace lost out to Hawkins and Colenutt, then with 3 laps left, Hawkins , Colenutt, and Brace caught B.Hunt, then with two laps left Hawkins and Colenutt went round the outside of B.Hunt to take 1st, and 2nd, Hawkins went onto win from Colenutt(from 12th on the grid), then B.Hunt, then Brace, then Weare, and 720 Dan Latimer(both from near the back of the grid) 16 cars qualified for the West Of England Championship. Colenutt out dragged Weare from pole and built up a big lead from Weare, and 45 Tim Seaford spun in front of Harraway.  There was a great 4 car scrap for 2nd D.Howard, D.Edwards, and Brice all passed Hawkins on the inside for, 3rd, and 4th,  and 5th, then D.Edwards got up the inside of D.Howard for 3rd , then tried to re-pass D.Edwards on the outside but couldn’t  make it stick!!, and on the last lap, they managed to reel in Colenutt in the backmarker’s and they was a big coming together involving G.Hunt, Bristow, D.Edwards, Brice, D.Howard and Weare, and Colenutt went onto take the win from, Latimer and Hawkins, then Weare who managed to recover to take 4th.

22 Junior Rods turned up with a lot of close racing in the Heats. They were also running a 2/3rd’s Format with a qualifiers only Final, with the highest point scorer getting pole position etc. In the 1st Heat 21 Kyan Passco took the early lead from pole from 225 Joe Edwards, then 77 Jacob Filer went round the outside of Edwards then nipped up the inside of Passco to take the lead, and Filer quickly built a big gap to 2nd place. Then Edwards passed 21 Passco for 2nd, and there was a whole bunch of cars breathing down Edwards’s neck, 149 Ieuan Preston  was making good progress, and then with 5 laps left Preston went round the outside of Edwards, and as Preston was nearly passed Edwards they had a coming together and Preston ended up on his side on the turnstile bend. Filer led the re-start from 190 Ewan Gumbleton, then 11 Jake Devine, Gumbleton got on the outside of Filer, with Devine tucked closely behind Filer an after 3 laps side-by side Gumbleton couldn’t make it stick and dropped down to 3rd. On the last lap 285 Jacob Anderson went round the outside of 29 Jasmine Mc Ardle and just pipped her to the post, Filer went on to win from Devine, then Gumbleton (from 12th on the grid), then Anderson (from 13th on the grid).  In the 2nd Heat Passco took the early lead, and 36 Josh Weare quickly got up to 2nd (from 11th on the grid), and Gumbleton, and Andrson was quickly up to 3rd and 4th from the back of the grid, then Weare went round the outside of Passco for the lead, then Passco went wide and Gumbleton, and Anderson didn’t need a 2nd invite, further back  599 Louis Whie got squeezed in to the wall whist 3 abreast, and Filer spun backwards in to the fence on the entrance to the turnstile bend leaving 376 Daniel Kent nowhere to go, then Kent backed out and got going and left Filer stranded backwards in the fence, and on the last lap Passco and 176 Maddie Giambarresi had a coming together which left Giambarresi perched on the inner marker tyres, and in the chaos Kent hit Filer head on!! Weare went on to win from Gumbleton, then Anderson. In the 3rd Heat Edwards took the early lead from Giambarresi, then 26 Leah Bennett, then 730 Taylor Sealey squeezed Weare in to the wall, and Devine was making good progress until he was squeezed into the wall whilst 3 abreast, and 854 Jack Sear was flying and quickly got from 11th to 2nd, then Sear’s car lost power and dropped down the order, and 3 laps left Devine and Weare went round the outside of Edwards for 1st, and 2nd, Devine went onto win from Weare, then Edwards. In the West of England Championship Weare took the early lead from pole from Gumbleton, and Anderson out dragged Devine for 3rd, the lead four quickly built up a gap from 53 Angus Hawkins who was leading a whole bunch of cars for a long time, and Kent got up from 11th on the grid to 6th and went round the outside of Hawkins to take 5th, and Sear had to retire with a problem, Gumbleton and Anderson was waiting for a mistake when going through the backmarkers but Weare didn’t put a foot wrong. Weare went on to win from, Gumbleton, then Anderson, then Devine, then Kent. Jacob Anderson had got enough points to claim the Track Points Championship.

There was a good turnout of 10 Hot Rods with a lot of close racing and overtaking in the Heats. In the 1st Heat 788 Mark Shelper took the early lead from pole and quickly built up a big lead from pole, then 611 Jamie Bryant and 38 Phil Parkhouse went round the outside of 57 Graham Taylor then 35 Neil Muddle for 2nd and 3rd, and 258 James Griggs got up from 8th on the grid to 3rd but Griggs couldn’t find a way past Bryant, then Muddle retired, and Taylor’s car went sick but he carried on, Shelper went on to win by ½ a lap from Bryant, then Griggs, then 282 Steve Hunt (from 9th on the grid). The 2nd heat was a reverse grid and 926 Alistair Murray opted to start at the back rather than pole, Hunt led from pole from Griggs, and they both built up a big lead from 49 Maurice Cole. Bryant lost a lot of time when he was squeezed on to the infield whilst 3 abreast, and Shelper was flying and worked his way up from 9th on the grid to 3rd and there was a four way scrap between Cole, 4 Jamie Oates, Parkhouse, and Bryant, and when Bryant had nearly passed Cole round the outside coming into the pit bend they had a coming together. Griggs caught Hunt napping at the re-start and nipped up his inside to take the lead, Cole had a ½ spin in front of Parkhouse, and Murray and Muddle retired. Griggs went onto win from Hunt, then Shelper. In the Final the highest point scorer started on pole etc. Griggs led from Shelper, then Hunt, further Murray and Parkhouse was having a great scrap an eventually Murray managed to pass Parkhouse on the outside and as the leaders was going through the backmarkers Bryant nipped up the inside of Hunt and Parkhouse got squeezed into the wall, then Parkhouse spun in front of Oates, Griggs went onto win from Shelper, then Bryant.

38 Bangers turned up with ½ the cars in each Heat. There was a good mix of cars including Ford Kas, Fiestas, and Pumas, and Nissan Micras, Pergout 206, Vauxhall Cavilier’s, and Astras, and Mercedes. In the 1st Heat there was a few knocks and spins. 111 Rhys Lansdown and 6 Jack Amor were amongst the spinners and 471 Martin Taylor was left stranded on the turnstile bend after a few cars had a coming together, 739 Jason Moore went onto win from 700 Les Brice, then 743 Jake Bond. There was a bit more action in the 2nd Heat and 956 Harry Thompson was spun and was collected head on by 384 Scott Benjafield, and there was a complete re-start as it as a false start, and 134 Cameron Mc Colm and 16 James Amor were in the thick of the action, 888 Dan Kempin forced 199 Tom Pearce onto the infield, and Pearce showed he wasn’t happy, 284 Noddy was in the lead for a long time until he went wide avoiding a spinning car, and only 9 cars made the distance. 701 Ben Brice took the win from 27 Dean Quinn, then Noddy. Only 10 cars came out for the Consolation 6 tried to spin but 174 Ben Taylor managed to hang on, 26 Russ Gillingham got from 4th to take the lead and led for a while until he ended up in the fence, then there was a red flag for a spring on the track, 403 Andy Howard led the re-start and went onto win from Benjafield, then B.Taylor, then 211 Adrian Coles, then 137 Scott Dunscombe the only finishers!! 20 cars qualified for the Final amongst the action Thompson spun 196 Dale Clarke and they got hooked up and Thompson dragged D.Clarke backwards for about ½ a lap, then there was a crash involving 197 Scott Clarke, Mc Colm, and 428 Zak Torode, which triggered a bit of action and Brice ended up perched on the inner marker tyres, then S.Clarke was limping around signalling somebody to jack him up then D.Clarke shoved him in around, then D.Clarke, jacked up 362 Aaron Loader. Quinn went onto win from Bond then Coles. 18 cars came out for the D/D  B.Taylor climbed over another car, then 775 Brad Hunt gave Lansdown a massive jacking then there was a red flag then the race was abandoned as Lansdown needed cutting out of his car.