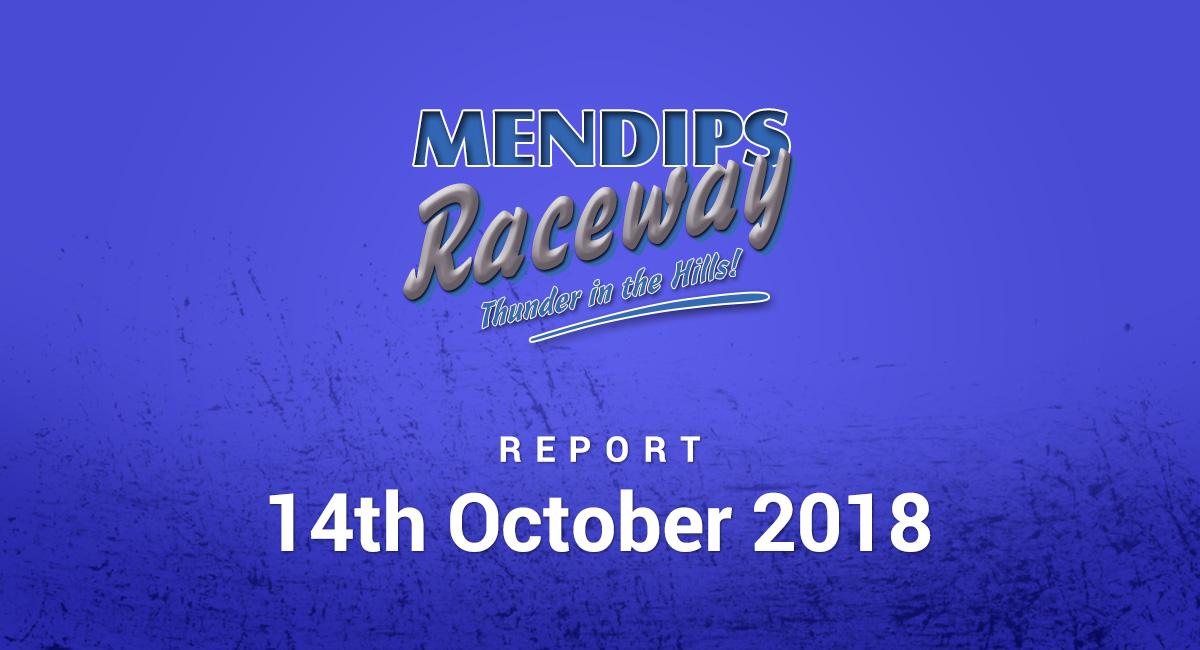 The heavy rain in the morning left a very wet track and the first part of the meeting there was a bit of drizzle before drying up leaving very tricky conditions for the whole meeting with a lot of drivers getting out of shape!!

15 Unlimited Bangers turned up. There were three Mercedes Estate’s, and Mercedes Hatch Back’s BMW’s, a Sierra Estate and a Volvo, and a rather 2nd hand Triumph, and 449 Will Guppy had a limo, amongst other cars. The 1st race was the West of England Championship 120 Mark Ashley took the early lead from 262 Roona, then 185 Richard Coaker, then Coaker found a way past Roona, and 362 Johnny James got up to 3rd from near the back of the grid, then James shoved his way passed Coaker for 2nd, and Coaker tried and had a few attempts at taking James out but James managed to hang on, then on the pit bend James shoved Ashley and they both went wide to avoid a spinning car and James nipped up the inside of Ashley to take the lead, then Coaker shoved Ashley wide for 2nd then Ashley spun Coaker out, James went on to take the win from, Ashley, then 27 Dean Quinn.

In the 2nd Race 14 cars came out 382 Tommy Hutchings led most of the race from pole, from Ashley, then 129 Lee Dalton had a spin, and 440 Mills spun 777 Ricky Daunton out, and 658 Adam Dorse got spun out in front of Daunton, and Daunton tapped Dorse on the nose! Then James got passed Ashley, for 2nd and Ashley tried spinning him out, but James hung on, Hutchings went on to take the win from, James then Coaker. In the 3rd Race 11 cars made it out, and Quinn took the early lead, and quite a few drivers got spun out, and a few drivers spun themselves, then Roona took up the running, then James made it up from 7th on the grid to take the lead then on to win from Coaker, then Quinn. 8 cars came out for the last race Ashley took the early lead from pole, and Dorse got spun out, and Hutchings spun Roona out, and on the last corner of the race there was a four way scrap for the lead and the lead three cars crossed the finish line three-abreast, and Coaker was declared the winner from Ashley then, James, then Hutchings. 440 Macauley Mills won the Track Points Championship.

18 Special Rods turned up with the cars split into two heats with the winner of each heat starting on the front row etc. In the 1st Heat 266 Micky Ford spun out at the start, and 581 Ryan Wallace quickly got up from 4th on the grid to 2nd, the Wallace went round the outside of 53 Angus Hawkins to take the lead, and Wallace built up a big lead, with 181 Ian McClaren getting up to 2nd, 556 Stuart Garland was going well until he spun out, and Ford recovered and made it up to 5th before spinning again.

120 Andy Latimer, 720 Dan Latimer, and 7 Will Harraway went around the outside of Mclaren for 2nd then A.Latimer got very sideway and D.Latimer didn’t need a 2nd invite to take 2nd, but Wallace was too far ahead to catch, so Wallace took the win from D.Latimer, then A.Latimer.

19 cars came out for the West of England Championship Final Wallace spun out at the start causing a bit of mayhem and fortunately every one managed to miss him and Headland took the lead from pole, with D.Latimer, on his tail most of the race, until Headland left a gap on the inside and D.Latimer didn’t need a 2nd invite to take the lead, and these two stayed nose-to-tail for the rest of the race, D.Latimer went on to take the win from, Headland, then A.Latimer.

17 cars came out for the Grand National with D.Latimer on pole but a lap down, Wothington out dragged pole sitter Thomson for the early lead, and Worthington led for a few laps, then Headland went round the outside of Wothington for the lead, with Hawkins in 3rd, and Thomson was ahead of a big battle for 6th, then 46 Angie Harris spun out in front of Edwards on the pit bend, causing a stoppage and Worhtington retired and for some reason Garland was pulled off, Headland led the Re-Start from Mclaren, then Hawkins, then there was another stoppage as someone dropped their Exhaust on the track!! headland led the Re-start from Mclaren, then 993 Darren Foss, then Weare. Then B.Brice passed, 700 Les Brice and Hawkins, then on the last lap B.Brice went around the outside of Weare to take 3rd, Headland went onto win from, Mclaren, then B.Brice, and D.Latimer made it up to 7th. 701 Ben Brice won the Track Points Championship.

22 Junior Rods turned up they run a 2/3rds Format with the highest points scorer from the Heat’s getting pole position for the Final etc. In the 1st Heat 214 Jude Manley out dragged pole sitter 92 Abi Southgate for the early lead, from 236 Alfie Brimble, then about the ½ way mark 29 Jasmine McArdle was up to 2nd, and 36 Josh Weare and 100 Thomas Weeks went round the outside of her to take 2nd, and 3rd, then McArdle spun in front of 8 George Jenkins, and McArdle was collected head on by 88 Charlie Pearce, then with 2 to go Manley slid wide and Weare, and Weeks didn’t need a 2nd invite, to take up the lead! Then on the last lap Weare slid wide and Weeks didn’t need a 2nd invite to take the lead then on to win, from Weare, then 75 Jack Buckinham.

In the 2nd Heat 28 Ava Hawkins found a way past 856 Jamie Cocks to take the early lead, then 599 Louis White nipped up the inside of Hawkins to take the lead, further back 149 Ieuan Preston got squeezed into the wall and 190 Ewan Gumbleton and Weare was carving their way through the pack using mostly the outside line and was soon up to 2nd and 3rd, then Gumbleton went round the outside of White for the lead closely followed by Weare, Gumbleton went on to take the win from Weare, then White.

In the 3rd Heat Cocks broke down, then Brimble found a way past Manley for the lead, from White, by the ½ way mark Gumbleton, and Weeks got up to 4th and 5th, then Gumbleton, and Weeks nipped passed White, and Manley. Then Gumbleton went round the outside of Brimble to take the lead, Weeks stuck on Brimbe’s tail for a number of laps but couldn’t find a way past, then on the last lap Brimble slid wide on the exit of the pit bend and hit the fence, and Gumbleton went on to take the win, from Weeks, then White.

15 cars came out for the West of England Championship Final, and Gumbleton only had a six point lead over Weare for the Track Points Championship, Gumbleton out dragged Pole sitter Week’s to take the early lead, and Weare found a way past Weeks for 2nd, then Manley broke down, then 176 Maddy Giambaressi ended up in the wall, then Pearce spun in front of Weare, then Weeks found a way past Weare to re-take 2nd, Gumbleton went on to win by nearly a length of a straight, from Weeks, then Weare who crossed the line nose-to-tail, and Gumbleton also Won the Track Point’s Championship, and 8 George Jenkins was voted this years most improved driver.