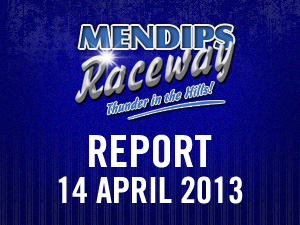 Mendips Raceway's mid April Micro Massacre meeting started off dry and overcast until the 5th race when the light rain started, which made the track very greasy and slippery.

63 Bangers turned up which were split into two heats. The small cars provided big action!!...with a lot of drivers taking home some very bent motors.

There was a lot of Ford Kas and some Micras and Fiestas, and a VW Estate. 517 Scott Weldon had a Austin Maestro, 190 Dominic Gumbleton a Morris Marina, 396 Scott Mowlam's Austin A40 and 523 Swampy had a Suzuki Wagon ‘r’.

In the first Heat there were 32 cars. 231 Reece Fields took the early lead and there was action all around as a pile emerged on the pit bend and a red flag to see to a driver on the turnstile bend (who was ok). Only 14 cars made it for the re-start which was led by Fields then 252 Steve Bugler then 246 Richard Sparks. Sparks and Bugler were having some fun and games, and swapping places, then Sparks planted Bugler into the cars on the turnstile bend. Sparks then planted Fields into the parked cars on the pit bend. after which Sparks survived a last bend attack and went onto win from 54 Tom Davey then 190 Dominic Gumbleton the only finishers!!

31 cars took part in the second heat where there was an early red flag for 801 Mike English (who was ok). There was a 6 car train on the back straight and a load of other cars piled in. Shortly after, there were was a pile-up on the turnstile bend blocking the track resulting in another stoppage. Only 10 cars made the restart which wasn’t quite as lively and 6 cars finished. 239 James Guppy took the win from 404 Rob Mills then 396 S.Mowlam.

There were 44 cars out for the Consolation Race. A few cars crashed on the first bend then there was a massive pile up on the turnstile bend as most of the field steamed in resulting in a track blockage. Only 7 cars made the re-start with Swampy in a very twisted motor. 409 Joey Collins took the win from 725 Simon Bye then Swampy in a very twisted motor, the only finishers!!

With only 12 cars qualifying for the final, any other cars that could get going could start half a lap down. making it a 43 car Final. Within the first few laps a pile-up emerged on the pit bend with most of the field steaming in, 10 cars made it for the re-start. 237 decided to crash on the turnstile bend and Gumbleton couldn’t resist jacking him up. Gumbleton went on to win from Mowlam the only finishers!!

9 cars took part in the all-comers race with another 18 cars waiting to join them for the D/D. There was an early red flag for a trapped driver and Guppy won the all-comers race from Tom Davey the only finishers! In the D/D Mowlam had a had a half roll, and Davey jacked up Sparkes, causing Davey to do 2 and a half rollovers!! It ended with Gumbleton and 15 Boogie having a head on.

There was a good entry of 11 Hot Rods. Just as the Hot Rods came out for their first heat, the light rain started, combined with the spillages from the previous Banger Race. It made the track very greasy. 39 Craig Harris led from pole and 3 Simon Harraway passed 578 Rick Lee for second place. Harris was building a big lead. 718 colin White started 9th on the grid and got straight on the outside and was going well until he got stuck behind 117 Dave Tossell and 258 James Griggs racing side by side then he got hung out to dry and slipped back down the order. White then had another go on the outside and made it up to 4th. Then Harris come to a halt and parked on the turnstile bend wall, giving Harraway the lead. By this time Harraway had built up a third of a lap lead. White tried going round the outside of 55 Alistair Lowe but was struggling because there was not much room to pass on the turnstile bend with a stranded Harris. White eventually managed to get passed Lowe on the outside. then he set about reeling in Harraway. Lee car went sick forcing him to retire. White managed to catch Harraway and tried going round his outside but couldn't make it stick. Harraway took the win from White then Tossell. In the second heat Lee and Harris had to pull off on the warm up laps. 18 Larry Langmead led for a while from pole. White passed 282 Steve Hunt round the outside for second place. then White found a way past Langmead for the lead. Langmead then went wide letting Hunt and 125 Mike Hibberd past. further back, Lowe and Harraway had a coming together and 205 Mike Norton was having a storming drive from 10th on the grid using the outside and inside lines to pass, and came home in 5th place. White took the win from Hunt then Hibberd. In the Final Griggs passed Lowe then Norton on the outside to get into the lead. White started 7th on the grid and found a way past Hunt on the inside then switched to the outside line and worked his way up to second place then had to set about reeling Griggs in. further back, Harris and Tossell spent a lot of the race side by side, and Hunt and Hibberd had a coming together. White caught Griggs and relieved him of the lead. White went on to win from Griggs then Tossell.

There were 21 Junior Rods present with half the cars in each heat. In the first heat 300 Charlie Ayles got past 715 Ian Mooorhouse for the lead within 3 laps 87 Callum Richards had got from 7th to 2nd with Ayles half a lap ahead. Richards managed to reel in Ayles but couldn’t find a way past. Ayles went onto win from Richards. In the second heat 956 Harry Thompson managed to out drag 376 Daniel Kent to take the lead, and 66 Becky Pearce passed 700 Ben Brice for third place. Thompson built up half a lap's lead, 510 Sid Harrison worked his way from the back and Pearce slid wide giving Harrison third and as Harrison was trying to pass Kent coming out of the last corner, Harrison’s car broke down, letting a lot of cars past again. Thompson took the win from Pearce. The track was greasy for the Consolation race with 9 cars in it. Moorhouse stalled on the rolling lap, and quite a few cars got a bit sideway’s and 921 Ryan Sparrow had a half spin on the turnstile bend trying to avoid Moorhouse. 61 Beth Stevenson got into the lead then crashed into the wall. 224 Jordan Edwards took the win from eigth on the grid from 24 Sam Crane who started in 7th. The Final was also run on a very greasy track, with 15 cars in it. Pearce took the early lead then Brice found a way past and built up a big lead. Harrison then spun. Thompson found a way past Pearce for second, and Thompson skidded wide on the turnstile corner letting Ayles into second place. Thompson spun on the next bend as Brice went on to take the win from Ayles then 362 Aaron Loader.