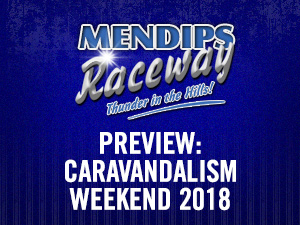 So to the last bank holiday weekend of racing for the year as Mendips plays host to another weekend of fast and furious action. Sunday sees Junior Rods and Back 2 Basics along with BriSCA F2, and Monday, a day of close quarters with the Specials and the Hot Rods, with the complete obliteration of the Robins and the Caravans

BRISCA F2 So to the BriSCA F2, who it will be an important day. A final chance to get a competitive eye in for many before the Big One, the World Championship Final here on September 8th. The Grid is ready for it – and many big name drivers are due to be with us. All drivers from the front 2 rows are due to be with us. Luke Wrench (560) and Kelvyn Marshall (101) have won finals here this season. Front row starters, British Champion, Chris Burgoyne (647) and reigning track champion here, Gordon Moodie (7) are looking to make an impact on their first visits of the year. Their presence will be most welcome to challenge the likes of Matt Stoneman (127), Steve Gilbert (542) and Neil Hooper (676) who are also nicely placed in the world grid. The Marion Bennett Trophy is up for grabs – last year’s recipient Lee Morgan (745) is due to be with again – 2 wins last time out– he will be one to watch! It’ll be a day for the form watchers and pin stickers as the business end of the season gets underway!

UNLIMITED BACK 2 BASICS After all the under 1800cc bangers had their turn at the most rudimentary form of banger racing, their bigger brothers are back for another go. With no limit on engine size, expect some big beasts to be trading paint and rearranging backsides on a frequent basis. A very strong field of cars today, including Twin Brothers Mike and Chris Parry (309 &328) who we no doubt will be gracing the Mendips Raceway with something French, also we have 185 Richard Coaker, the winner of the Graham Salter Memorial looking very strong in bangers this year so far, with as ever, 440 Macauley Mills running through the field.

JUNIOR RODS For the first time since June, the youngsters are back on track. Last time out, Ewan Gumbleton (190) took a faultless maximum, taking both his heats and the final. Josh Weare (36) kept him honest with a 1 -2 -3 in all his races. Other impressive displays came from Charlie Johns (35) who got himself a second in the final and led most of the laps too.

BANGERS For only the third time this year, the rookie bangers are back at Mendips Raceway, with 100 Alec Jenner leading the points after winning two finals from two meetings this year. This meeting also marks the return of 778 Paul May the leader of the Bod Squad with team mate 784 Henry Murray leading the bookings. With some fast drivers on track, will 100 Jenner make it three from three?

ROBINS The robins are back this weekend, with the Figure of 8 final upon us. It’s all change at the top as season long points leader 504 Andrew Worthington has dropped to 4th with 26 Russ Gillingham now taking the reigns at the top, Clifford Worthington 437 is currently second with only 6 points the difference and 27Dean Quinn who missed last meeting is third.

HOT RODS WEST OF ENGLAND The big day for the Hot Rods, on what promises to be a challenging day for the non contact, highly tuned race machines. The prestigious West of England Championship is up for grabs, with sponsorship from our great friends at Weltch Media. Defending champion, the legendary Colin White (718) has been the man to beat or stop. Last time out for the hot rods, a busy grid saw Steve Hunt (282) and Jamie Bryant (611) get the better of White. A controversial end to the final saw Hunt and White clash on the penultimate corner, which saw White unhappy, and Bryant come through to take the win.

CARAVANDALISM 18 The day every driver enjoys. If you have ever been stuck behind the mobile homes, then you know how gratifying a caravan meeting its maker is. Over a dozen caravans are here and ready to be smashed. Obliterator in chief has been Dean Quinn (27) who for the past three years been victorious in this race. Rumour has it, that so confident of victory no 4, the roof of his caravan is painted gold. Once again, we’ve had to turn away loads more caravans as we are overbooked. However, there will be plenty enough on track to never, ever, darken the roads again.