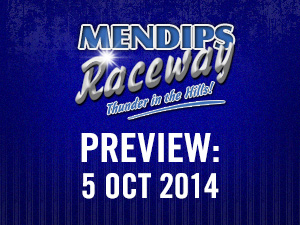 October..  And whilst we enjoy the unseasonable weather, we hope that it will continue at least into this weekend as Mendips Raceway will reach the end of its 2014 season with a busy programme, pit area and trophies galore with the BriSCA F2 Stock Cars going for the Benevolent Fund Trophy and Rookies Reward Final as well as the West of England Championship Finals for both the all Sierra Special Rods and Rookie Bangers.

Domestically, 886 Chris Bradbury wrapped up the track championship here for a record seventh year at the previous meeting in July. The main trophy on Sunday is for the Benevolent Fund trophy which is contested to give recognition to the Fund which is an officially registered charity in place for drivers in F2 who get injured whilst racing and then cannot work as a consequence.

Sharon Blood and her team of helpers will be coming amongst the crowd during the course of the afternoon with collection buckets, so please give what you can.
Last year it was Bradbury who took the victory on the shale at Manchester’s Belle Vue and as the reigning track champion he will start as the favourite. However, coming from the rear of a closed grid will mean that there are plenty of capable drivers ahead too and 676 Neil Hooper, 783 James Rygor and 921 Jack Aldridge will be but three who will not be letting it go lightly.

Whilst this particular race is aimed at the top drivers in the sport, we will also be catering for the other end of the grid too with the 2014 final of the ‘Rookies Reward’ open only to white and yellow grade drivers. Each BriSCA F2 staging promoter is obliged to stage such an event and whilst there are variations, we here at Mendips were one of the first to run one, and we continue with the policy in keeping what it says on the tin and it is only open to those qualified drivers who are graded either white or yellow. It is worth winning with good prize money and Yokohama tyres to the ratio of four, three, two to the top three.

The Bangers West of England Championship is one of the oldest titles in the region, and indeed the country as a whole, and in 2012 the decision was made to switch it to the ‘Rookie’ format and it is one that really hasn’t been looked back on with a good entry of cars, which sadly hadn’t been the case in the last few years when it was run to ‘National’ rules.

Last year 235 Toby Brooks took the title and last time out the Rookie Bangers were here over both days of the August Bank Holiday weekend where 929 Sam Baker took the Final victory on the Sunday and then on the Monday it was 668 Paul Mortimer. Points champion 109 Chris Neville again piled on the points to put him in contention again this year, as this is the decider for that too…

It is a wide open event, nobody really predicted a win for Brooks last year in but aside from the names already mentioned others to look out for will doubtless be 41 Sam Hollins, 129 Lee Dalton, 246 Ryan Sparks and 475 Ben Sealy.

On a day when we have the ‘Ben Fund’ trophy for the F2’s, we will also have the Final for the FORDS mechanics race too. FORDS is a very similar charity, set up for drivers from the other oval racing formulae and also the track staff who are injured whilst on track or on duty. Each track stages a mechanics race in the Bangers, giving the important members of the crew a chance to have a go, with an obligatory donation to the pot, and today the Final of that will take plaace.

Last, but by no means least, the Special Rods who have yet again had a solid season. The Sierras provide local budget class non-contact racing and come into today with their points chase being very close, and there is every chance that it will be decided on the last race of the season – the West of England Championship – again, just as it has been every year for the past few years.

18 Russ Colenut took both titles last year and is right there again this, but it is 47 Richard Howard who has an 11 point lead coming into today with 23 Ross Stuckey and 85 Andy Pincott in with a shout too for the points, and all of whom will be amongst the favourites for the West of England.

Last time out, over the Bank Holiday weekend 5 Alan Lettley took a hat-trick on the Sunday and then on the Monday it was Stuckey with two wins and Howard and Pincott with one each who were the victors.

Racing will get underway at 1.00pm…