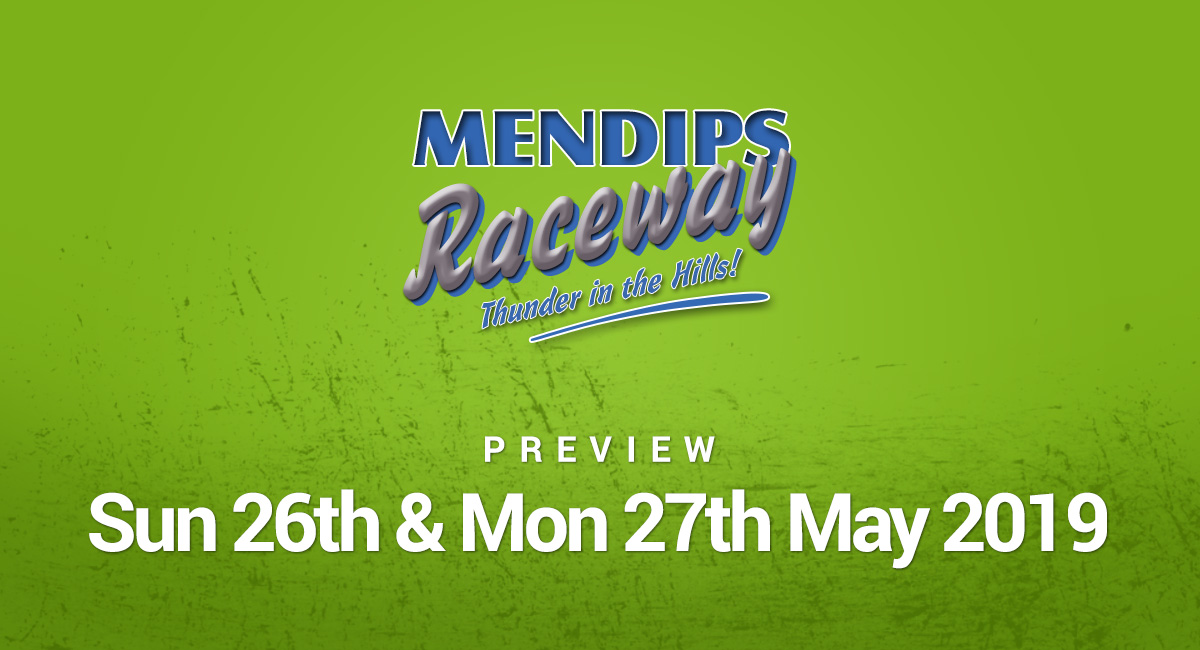 Welcome once again to another Bank Holiday bonanza here at the Marvellous Mendips Raceway.

The Whitsun Weekender plays host to the BriSCA F2's, Juniors, Rookie and in a first 4 x4 Bangers, whilst on the Monday, it's a crazy day for the Robins, 2lt Old Skool Bangers and non contact of Special Rods and Slick Cars.....

Whilst the numbers were down at the last meeting, the action was nothing short of spectacular, with Matt Linfield (464) taking top honours in a rare appearance at the Mendips. There was also a career first win for Dan Kent (976) at his local track, and Ben Goddard (895) signing off a successful Bank Holiday weekend with two wins.

Leading the booking list is new teen sensation, Charlie Guinchard (183), the latest of that particular family to race F2. In his first tarmac meeting, he stunned a big name filled pack by winning the final at the May Skegness Speedweekend, and then backing it up with a repeat on the Sunday. Such was the dominance of the youngsters, such stellar names such as World Champion Gordon Moodie (7) have said that this kid is one to watch! Fresh from his second place last time out Jack Prosser (844) joins Peterborough's Andrew Palmer (606) as the travelling circus joins the regulars! With it being the only meeting south of Aberdeen, we'd like to think there might be a few more visitors!

Essential farm vehicle, footballer status symbol, or school run Chelsea Tractor, it's time for one last blast before these vehicles go to the great episode of Countryfile in the sky. Hard hitting crunching 4 wheels driving! It will be interesting to see what kind of beasts come out to play... There is a rumour of a Hi Lux coming out, one of these Top Gear tried to kill on Weston beach a few years ago. Your usual favourites are coming out to play, Dean Quinn (27), Ricky (67) and Patch Beasley (77) along with Big Mac (440) and veteran Rob Mills (404). With this being a new idea - the DD could take a while!!!

Nudge and spin is the name of the game with the banger boys playing with the cars. Jake Bond (743) was the winner last time out, taking a Final and Allcomers double!! Wins for Jody Jeanes (133) and Cookie (70) returning. On the booking list former track champions and former dominant forces the Styles Kev (38) and Ben (83) return. There are a few names and a promising entry shows that there is plenty of life left in the formula! Former Junior Rodder Millie Ruby (141) joins the pack

The stars of the future are out in force, and last time, Ieuan Preston (149) kept his head whilst others were losing theirs taking the final last time out. The superstars Jack Devine (11), Jack Buckingham (75) and Josh Weare (36) took the other wins. Ava Hawkins (28) continues to get good places and there is a welcome return for Maddie Giambaressi (176) after her scary crash at Easter.

In a first for Mendips, we have joined forces with St Day, Smeatharpe and Grimley to create the Supreme 2 Litre Old Skool Championship. It culminates in the grand final at the Smeatharpe Banger Bonanza Meeting at the end of December.

Big names from the Westcountry Old Skool Scene are coming to play at the Mendips Dip. Richard Sparks (246) and Richard Coaker (185) head a Newton Abbot invasion, along with Autospeed multi champion Terry Hill (133). Kenny Jo Gabriel (720) joins the throng, along with the regulars of Dean Quinn (27), Jake Bond (743) and Lee Dalton (129). Points make prizes, and along with the other rounds, the top 10 from heats and consolation to the Grand Final.

Another race meetings for the Specials with the wins being shared around. This is the most wide open formula in years, literally anyone can win Andrew Worthington (581) added to the Worthington winners in the Special rods. Andy Hawkins (81) took a win before Sam Howard (44), Micky Ford and Will Harraway (7) took wins. Reigning West of England Champion Dan Latimer (720) drops to an advantageous blue grade, and will be one to watch.

The 3 wheelers have another day of hilarity to ensue. Last time out, Sid Harrison (510) took a win and Martin Dalton (58) rolled back the years by taking the final... Alan Machin (55) certainly became the people's champ entertaining with rolls at any and every opportunity, including being the first through the caravan in the Caravan race which was won by Russ Gillingham (27). Crazy Day has silly races like the Slalom, the wrong way round, pairs and ramp races have all been tried in previous years. What will they do this year????

If it is, or has been, or will be a Hot Rod, this is the meeting to bring it too! Slick Cars are a fantastic, no holds barred speed demon, they’re fast, make lots of noise and promise fantastic racing. After witnessing the Hednesford meeting I can assure you that this formula is one to het involved in!

See you next time on the 30th June for BBA English Open for the National Bangers, with Special Rods, Junior Rods and a visit from the ORCi Stock Rods.