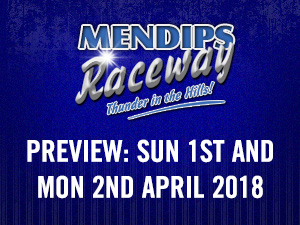 Easter weekend gets underway with a blistering program of eggcellence, choc full of your racing favourites

So the golden year has finally come to Mendips – it’s the start of a very important year for the F2’s here – the 2018 BriSCA Formula 2 Championship of the World is held here in September – and if last year’s British is anything to go by, then it should be a cracker!!!
Nationally, a combination of the white stuff and new rule changes has seen a general malaise take over. However, the Westcountry continues to buck the trend of the national picture – and we hope to have a World Final bounce, with many drivers looking to get dialled in to the track prior to the big day

Adam Rubery (700) was victorious last year in the Gerry Dommett Memorial trophy- remembering one of the UK’s pioneers of the stock car scene and creator of this track and the World Final itself – his Abbey Stadium in Swindon held the first ever world championship.

Both Rubery and track champion – National Series Champion, Gordon Moodie (7) have yet to be seen on tar so far this year. Last year, Moodie turned up unannounced – would history repeat itself??

Old rivalries of centuries take to the track, as England take on Wales- in a battle which will be having them singing in the Valleys. A casualty of our snow cancelled fixture of the 18th March, the Welsh team wasn’t available for the Micro Madness meeting, which gives the English their full attention on destroying the interlopers from across the Severn!

Our grasstrack friends from St Brides, near Newport have put up 20 to take on the best this side of the Severn. Yes, it’s the track you often see on BBC One, prior to Eastenders!!!
20 car heats of 10 from each team, then all in for a devastating final to see who is the daddy. For ease, the English are in white and the Welsh in their traditional Red

By their own admission, last year’s season of Hot Rod racing wasn’t a classic, with numbers down and the weather playing its part in car attendances.

It was a James Griggs (258) shut out as he retained his track championship at ease, although Jamie Bryant (611), Mark Shelper (788) and the legend Colin White (718) kept him honest.

Speaking of White and it his company which is sponsoring today’s races, in memory of long time mechanic Tony Mears, who was by his side during his years of dominance in the National Hot Rods

Keep up to date with all the latest Mendips Raceway news, on Facebook, Twitter and Instagram, and here of course on mendipsraceway.com ! where you can get the latest information on the F2 World, including ticket information and news on the World Final Minisite….

First bank holiday Monday of the year, and have we got some fun for you today to burn off those chocolate enduced excess calories. The Juniors are back for their second running of season 2018, the Bangers (Rookie) get underway, then the sheer novelty of the Robins and the delivery drivers destruction as Vans meet the maker!

A second showing for the Juniors, and with the first day of school done and toes firmly dipped into the water.

Last time out it was Thomas Weeks (100) who scored a near maximum win with 2 heats and a 2nd in the final. Maddie Giambaresi (176) got some excellent places and Jake Devine (11) took a heat win. But it was Josh Weare (36) who took the final.

Hoping for better luck is Leah Bennett (26) who was really unlucky in losing the lead with a lap to go!

You’ve seen them on the M5 tailgating. You’ve seen them blocking your road dropping off numerous eBay parcels. Now see the backbone of Britain getting some severe action on the track, for some sheer Vandalism. Transits, crew cabs and LDV’s al coming on track.

Big Mac (440) and Dean Quinn (27) were the stars of last year, and it’s more than likely that those two will be playing as two of the more destructive banger drivers

In a change to the advertised programme, the Bangers return was delayed for a day to allow us to accommodate the England/Wales match which was postponed by the snow.

Dan Rice (138) continues to be one of the shrewd operators in the formula, which is predominantly nudge and spin. Ben Brice (701) had a fair bit of success as did Henry Murray (784)

Season 2018 gets underway for the rocking n rolling Robins, with many looking to get their eye in, and trying to get around the circuit without falling over! Track Champion Tim Weare (304) is due to be on track again, along with Russ Gillingham (26). Last year’s top entertainer – Jerry Weeks (100) had more rolls than a dice on a casino table – proving that bringing the fun gets rewards too.

A straight 3 race format is to be deployed to get themselves used to the stability.

Both meetings get underway at 1pm, but get here early – these aren’t to be missed