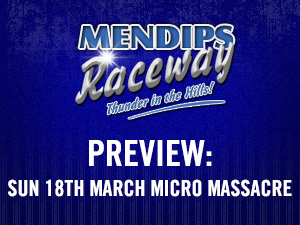 The new season is upon us, with the first meeting of season 2018. Whilst the cars are small -the action is big, with Micro Bangers – the Micro Massacre and the first leg of the Severn Smash Up - England versus Wales, and the Junior Rods, meaning that the big cars can have the day off.

Heavy hits from the Micro Bangers in the yearly Micro Massacre. Lot of cars are booked in for destruction.

Micras, Kas and the like meet their maker in heavy hitting action.

With drivers coming far and wide, it will prove to be a cracking afternoon!

Forget the 6 Nations Rugby - National pride is at stake on the track as England and Wales battle it as 20 of Mendips finest take on a score of the mighty St Brides Raceway, from Newport.

You may have seen them before Eastenders! England will be White, and Wales are Red

3 races in MIcro bangers, 10 from each team in the heats, then whatever is left for the final to see who will have bragging rights across the Severn, until July when the return leg takes place.

Then the leftovers will join in the allcomers and DD at the end.

Last year’s champion Jacob Anderson has reached the upper age limit, as has Dan Kent, who is headed for F2, with Cameron McColm graduating at the end of last season, racing today in the Micro Bangers! – it will be a new broom brushing clean.

Cornishman Jack Sear (854) seems to be the favourite and Charlie Pearce (66) will both be chasing for top honours, and as the drivers from the top disappear, new drivers will take their place.

The racing gets underway at 1pm, but get here early and meet the folks…