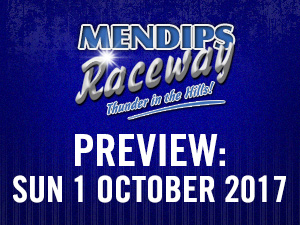 For the last time this season it’s all eyes to Mendips for a cracker of a last meeting to keep your cockles warm for the winter months as Unlimited Bangers, round 4 of the National Series for BriSCA F2 and the return of the tin top tearaways, the National Saloon Stock Cars…

Welcome, for the last time this year, to Mendips on what promises to be an absolute cracker of a meeting to keep your cockles warm for the winter months. All contact today – Unlimited Bangers, round 4 of the National Series for BriSCA F2 and the return of the tin top tearaways, the National Saloon Stock Cars…

It’s been a busy season for the F2’s here – but still plenty to race for. This year, we see a different end to the season nationally, as the race for the silver roof has a new series. 15 of the top drivers in the land will race 11 rounds up and down the country, with one driver getting silver at the end of it. Think of it like the Chase which happens in NASCAR. Track championship leader, Gordon Moodie (7) heads the entry along with regular David Polley (38), along with shale drivers making their track debut like English Open Champion Josh Coleman (615) who has taken to the tar in pursuit of the silver. All the “Shoot Out” drivers will be graded superstar and will have to fight their way through to the front.

Last time out, Lee Morgan (745) took top honours with his first final win at the end of August. With the lower graders having a lot of fun over the season – all eyes will be on the Whites and Yellows, with prizes galore for them.

The biggest meeting domestically is here. The title they all want to win. Old Skool meetings this year have been raced in good spirit as the season has gone along. Defending the title is “Bod”aka Paul May (778), however the ones to watch will be the Devonians, Danny Hunt (382), brothers Buddy (62) and Old Skool World Champ Johnnie James (362). Richard Sparks (247) was also victorious this season taking top honours on Graham Salter Tribute day. It promises be an excellent send off to another brilliant season of banger racing here at Mendips.

For the first time in ages – the 2 litre National Saloon Stock Cars return for the first time in absolutely yonks. If you have never seen these – then you really have missed out. Heavily armoured saloon cars, giving the big heave ho on every corner! With a lot of drivers taking in the opportunity of a extended westward visit after stopping off at Smeatharpe last night, the big names are coming down to play including British Champion Shane Davies (158), Lee Sampson (428) and  Adam O’ Dell (171). Local interest comes from Kieran Bradford (27), veteran Phil Powell (199) and youngster “Junior” Buster Sage (902).

Racing starts at 1 – but get their early!