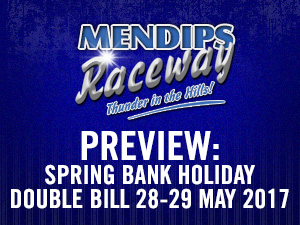 Another Bank Holiday weekend but the action continues, like the holidays themselves, thick and fast, as Whitsun Weekend at Mendips sees more action to shake a stick at. Sunday sees the 2nd running of the Old Skool Banger World Final, with support from F2’s and Juniors, whilst on the Monday its Back to Basics, simple entry level Bangers along with Specials and Robins in Crazy Day mode.

BANGERS :OLD SKOOL WORLD FINAL
The Second Old Skool World Final is the top event in town this weekend, with the Gold Roof and Perpetual Trophy up for grabs. Defending champion is Buddy James (262), who took his semi and then followed it up with a decisive win from family member Johnnie James (362).
For those not aware, the event is split into 2 semi finals, of which the top ten qualify. There is one more chance to qualify in the Last Chance.
Then come the World Final. All competitors will come out and pick a ball from Mr Starter’s Lucky Bucket, and then the grid will be formed, and at the end – a champion will be crowned….
We have entries from…..(insert here Graham, mention any travellers!!)
Last year we had an excellent showing from across the south with many taking the opportunity to stop off en route to elsewhere – it’s going to be a different day of banger racing, with lots at stake!

BriSCA F2
It’s the last opportunity for the F2’s to have a blast up and down the infamous Mendip Hill before the British Championship. For the first time in ages, this meeting is not clashing with St Day, which means we should get a reasonable amount of cars. There is talk of a few visitors also, getting there eye in before the British Championship next month
One of those visitors last time, Gordon Moodie (7), took top honours in the final on May Day, which has propelled the Scot to the top of the points chart. Paul Rice (890) will be looking to add to more race wins following the last meeting. But the talk of the show last time out were the white tops Nigel Fordham (245) and Ben Goddard (895) who possibly could have had the final if it wasn’t an early yellow flag.
Dave Polley (38) will be looking to play catch up after his suspension, and track champion Chris Mikulla (522) will be a bit more focused, after the birth of Junior Mikulla no 3 – congratulations to him and Grace!
All in all – should be an excellent appetiser for the what is to come – as to the next meeting – clear your diaries, mark your calendar, set a reminder for your phone and make your excuses – this is simply going to be a weekend not to be missed. The biggest meeting at Mendips this year, if not for years – the 2017 BriSCA Formula 2 British Championship will see the biggest names in the sport compete in a series of qualifying heats on the Saturday night, before the big final on the Sunday – plenty of F2’s on display.
We will have plenty of information on a special section on our website www.mendipsraceway.com for all the build up to the event

JUNIOR RODS
The youngsters are back for another crack round the track as the stars of the future get in lin. Last time out, the four races saw 4 different race winners, with Ieuan Preston (149) taking top honours in the final. 8 points separate the top 6 drivers in the Points table, with Cameron McColm (34) leading Jacob Anderson (285), Charlie Pearce (88), young Cornishman Jack Sear (854), Dan Kent (376) and Ewan Gumbleton (190). With these drivers not giving an inch in their star grade battles, it could be another lower grader which could speed away and take top honours.

BACK TO BASICS: UNDER 1800 BANGERS
The simplest form of bangers, pick it, strip it, shove a cage in it, and let’s go racing, Racing at its most disposable, as the action progresses as the meeting goes on.
There have been 2 of these so far at the B2B at Mendips, last time out it was Under 1800, was back in September and Lee Dalton (129) took a heat and final double. Come the DD, it was big vs small, as the bigger estates taking on the small hatches.
The biggest B2B to the Ayles Farewell in June saw over 70 cars, cracking racing with Liam Cracknell (241) coming out on top.
The simple builds means even a first timer can take on the more established driver… so it really is anyone’s race!

ROBINS – CRAZY DAY
So the Robins are back for another selection of Wacky Races, that only Penelope Pitstop and Dick Dastardly could compete with. It’s Crazy Day, and last year we saw the Robins race the wrong way round, racing in pairs side by side (and even a set Siamese triplets), and even a Slalom, which would have befitted the slopes of Lillehammer or Innsbruck.
This year, who knows what the mad scientists have come up for your entertainment.
Last time out, all those who managed to not to drown in the torrential rainfall that befell saw Tom Manell (333) take the win in the Caravan DD, which became pone of the most hilarious races we have seen this year. Dan Tytheridge (3) will be hoping for better luck after leading one of the heats right until the last corner, until one of his wheels fell off. I know you can drive a Robin on a bike license – this is taking it to extremes!

SPECIAL RODS
The budget rod formula are back with a vengeance as after there showing on Thunderbolt Sunday. Tim Weare (304) took a hattrick of wins, but points leader Russ Colenut (426) took top honours in the final. Colenut, leads from Ben Brice (701) and Will Harraway (7). Another good day of fun for the non contacts.

Both meetings start at 1pm, see you then.