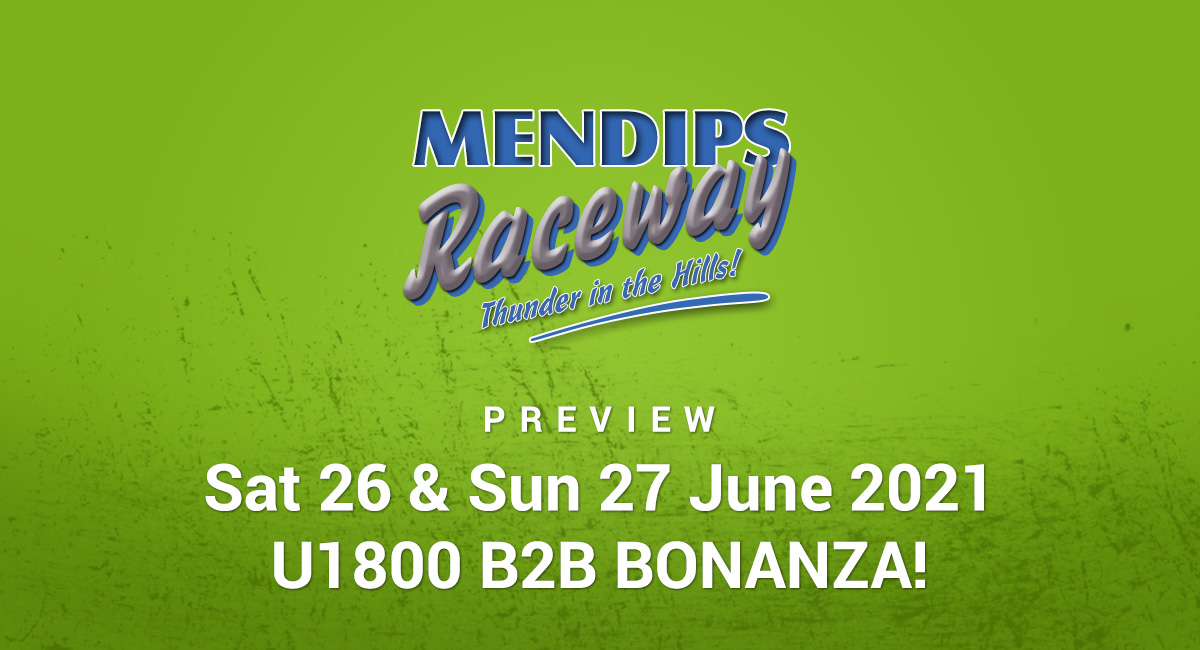 Camping available at £15 per person to cover facilities hire. (Please bring cash to pay on arrival)
Hard to believe, but like Bon Jovi sung, we are halfway there – and although living on a prayer hoping things are getting near to normal the traditional Mendips Weekender is the biggest thing on this weekend in this part of Somerset. Well Glasto isn’t on this year, but our Midsummer festival should see plenty of action on and off the track – with a beer tent to recant stories in the evening, and stories to be made and retold on the Sunday…..

The simplest form of banger prep, rip out the un-necessary and put a cage and harness in, get in and race it, with no nonsense, have a crash and a laugh and then on Monday morning, put it in the baler!
The madcap scheme is the idea of Banger Coordinator Rob Mills and long time friend and former Weymouth Wally Jon Ayles to have a good social meeting.

Interest has been huge and plenty of drivers have applied to race in the meeting. With it being Back 2 Basics, regulars Mike Parry (???) and Chris Parry (328) will no doubt find something French, rotten and fully worthy of trashing (Put Booking highlights in here please Jack) It’s not going to be your average banger meeting with varied and silly prizes for the competitors, where winning will not be the be all and end all. Going to be a fun meeting and hopefully with plenty of crashing in the right manner.

Meetings 3 and 4 of the season for the budget non contact class and again a good field of drivers descend onto the Mendips Oval for a busy weekend of close doors non contact action.

Jason Oliver (303) has been the man to catch so far this season, taking the final at the opening meeting and gaining good places at the away day at Taunton. He starts from the Red Grade for the first time as he currently leads the points Likewise, Junior Rod graduate Tom Weeks (100) had an excellent debut taking both his heats in his first meeting and earnt a rise to yellow.

Spare a thought for Leah Bennett (26) who has got to grips with the formula his season tand looked like a maiden win for the fair maiden, however her gearbox had other ideas so cruelly late in the race.Ex F2 and banger star Andrew Bressington (278) broke his win duck at Taunton and Tom Bristow (60)also took a win that meeting.

For the regulars, for the Howards it was more like namesake, former resident of nearby Cross, Frankie Howerd as calamity befell in a family pile up in the turnstile bend. Dene (41), Andy (43), Sam (44) and Richard (47) will hope for better luck.

The kids are alright and an opportunity for them to get 2 meetings over a weekend. Leading the points, last time’s final winner Tom Gumbleton (190) heads the way. Silver roof George Jenkins (? had another win and the up and coming stars Jake Ralfs (28) and Harry Melville (26). Ryan Brooks (210) impressed from his white top display.

The three wheeled tearaways return to the track with another action packed display of wibbling and wobbling their way around the raceway.

Undoubted star of the show was Tom Weeks (100) who celebrated 3 entertainer trophies. Jack Bunter (128) also spent most of the meeting on his roof, aiming to get an entertainer trophy to show off to the crowd. Needless to say the race promoter was having stern words with the box that he didn’t get a trophy. In embarrassment he parked his robin inside the abandoned caravan to hide from the shame! In the races, Aaron Loader (362) him of many formulas fame, took a win.Next time…..

It’s Pink Day when the F2’s race for the Pink Ribbon Trophy sponsored by the Maidment family, the bangers are in Micro teams for Filo’s Crashmania and the Specials play support, with added fundraising shenanigans in aid of Cancer Research – don’t forget something pink!