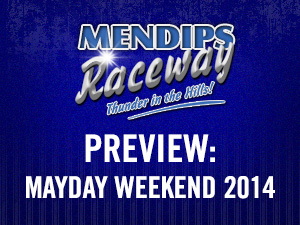 It is a cliché but the Bank Holiday weekends are like London Buses at this time of year, as only a week after Easter we are set to be back again at Mendips Raceway and we will really have something for everyone over the two meetings with the highlight being the Unlimited Bangers Thunderbolt, ahead of more action including the BriSCA F2 Stock Cars on Monday, and a lot of Bank Holiday fun too in-between too.

Sunday and the Unlimited National Bangers reach THUNDERBOLT 14.  Yes, it really has now been going that long, and that well established that drivers have had cars put aside and in many cases built several weeks ago for the fixture and once again looks set to produce an interesting entry of both drivers and cars.  Last year the victory went away once again when 382 Jack ‘Chubby’ Foster Jnr took the win for the second year running and he is set to travel down from the north of England to defend, aiming for that third year in a row.  Many big names from the Bristol area, the south coast and the southwest will be here to greet him though in what looks to be another hard session in the offering.  The big Vans on Easter Monday was won by reigning points champion 54 Tom Davey (who actually took a hat-trick on the day) and then the Micro’s on Mother’s Day, where the small cars were once again big on action.  115 Pete Street was the winner then.  Sunday’s programme will be backed up by all non-contact racing with the Sierra Special Rods and Hot Rods back out.  The Hot Rods have had two meetings so far this season. 718 Colin White took a hat-trick of wins in the mixed weather and associated track conditions on Easter Sunday whilst it was again 125 Mike Hibbert who was his nearest challenger by chasing him home in the Final, after being the winner at the opening meeting in March.  Hopefully there will be a few more cars here this time, but whatever, the Hot Rods continue to be a spectacular sight around the track.  The Sierras continue to thrive and with cars on track providing good and close racing, and whilst yes, many of the cars came off the production line before some of the now drivers were born, but who can argue?  They had Easter off, which was a rarity for them, but that was because they had the opening meeting instead in a little bit of a fixture shuffle and it was the familiar names and numbers at the top of the lap charts at the end of the races with 18 Russ Colenut and 47 Richard Howard the heat winners, 122 Joe Rowe the consolation and then the Final was won by former points champion 23 Ross Stuckey from 47 Howard and 41 Dene Howard.  Who will get up amongst them this time?  As ever, expect some close racing.

Monday and the BriSCA F2 Stock Cars will headline the programme and they had their World Championship qualifying round on Easter Sunday, and it was 886 Chris Bradbury who was again reigned supreme, literally in the rain by winning heat, Final and Grand National to score a 50 point maximum.  He was the first to achieve this nationally in 2014.  Chris is the six times track champion here and it goes without saying that he is the one to beat again this time.  However, the new grades come in force at the weekend on the national points chart and that could change things as  some drivers have gone up, others have gone down and all of this could play a significant part in the outcome.  For the lower graded in white and yellow, it will be the first round of the Rookies Reward series, and there really is a reward today as sponsors Shock-Tec have put up a set of Shock Absorbers for the winner, and Chris Bradbury kindly donated the set he won on the meeting Final last time for the first white grade home in the race.  And with prize money remaining on 2013 schedule for it, they really will have it all to race for.

The National Bangers will have a World Championship qualifying round and this will perhaps a have a little more local interest and ultimate significance on track than THUNDERBOLT, with the easier availability of the cars in the under 1400cc format.   Much the same applies as with Sunday with regard to who may be the ones to watch, and we also hope that some of those who raced with the ‘Rookie’ Bangers on Easter Sunday will give the Nationals a go this time as it is a good opportunity for them to do so.  Last but certainly not least, even though they have one less wheel, the Reliant Robins complete the programme and on Easter Monday the winners were 304 Tim Weare and a first time success for 99 Steve Chappell.  This time though we hope that there is some visiting interest as we will be staging the first of our two rounds in the ‘Midlands Mayhem’ series in conjunction with Grimley Raceway and Incarace at Birmingham.  Thus we could see a bigger entry of three wheelers than usual, and we all know what that will invariably lead to!

Both meetings start at 1.00pm – and remember, rain or shine we race on….