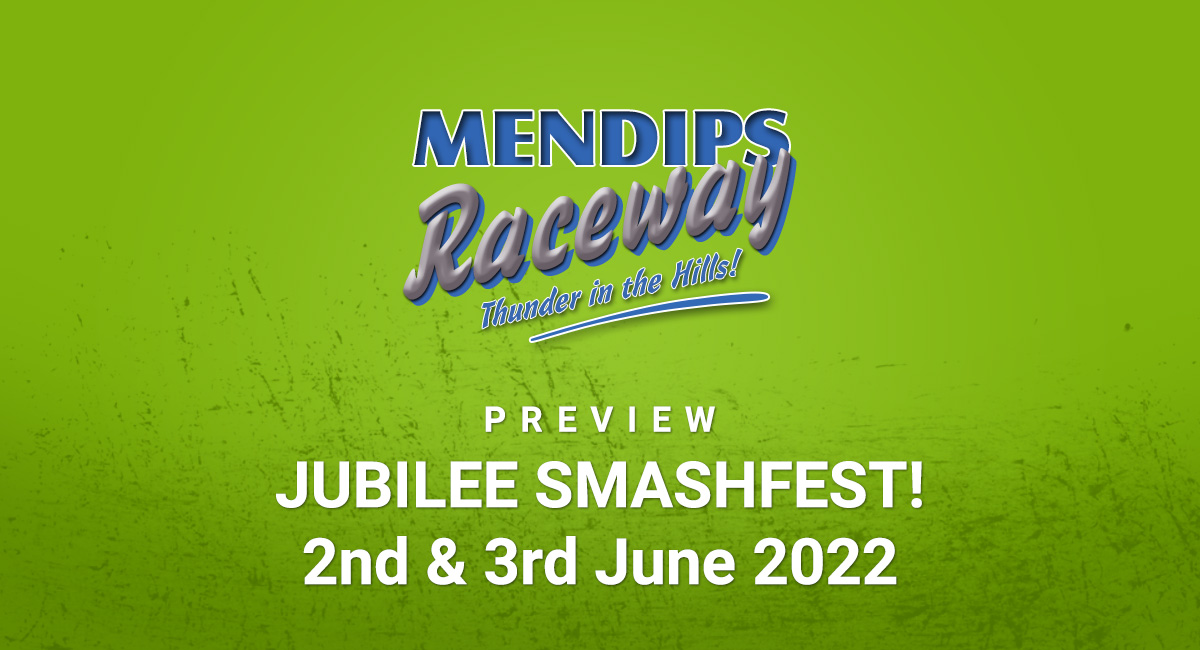 We look forward to welcoming you once again to Mendips for what proves to be a celebration of regal racing for the Jubilee!

The racing will be platinum as Elizabeth II commemorates 70 years on the throne. Rumour has it in 1952, Graham Bunter was just about to start his stock car career! We get a Bank Holiday Thursday (hands up who would have preferred a Monday!) and a Friday to start things in our own little tribute to Her Maj.

A lot could be said about BriSCA F2 today. We could get lots of cars en route as the first part of a westward week of racing, with the Benevolent Fund Championship taking place at St Day and the much publicised #LoveF2s People’s Trophies at Taunton at the weekend. With a big prize pot on offer elsewhere, we hope that many peeps will make this a first stop on their Jubilee jaunts, rather than drive past.

Last time Paul Moss (979) had a cracking meeting with 2 heat wins and a cheeky podium, with James Rygor (783) taking the other heat and a final which on the radio mic after the win brought him to one win of the recently retired Jon Palmer’s (24) final total, to which the “Tiger” said he should get out and try and pull away. Former track champion Luke Wrench (560) displayed another new car in Mendips colours, in a display to try and sell it to Jack Bunter!

Junior Rods are the stars of the future and are certainly the formula to watch. Harry Melville (26) and Lewis Allen (311) top the charts with the “Ginger Assassin” Alfie Murray (610) keeping them very honest. Alfie followed up his white top success with a win from yellow last time out. “Mighty” Max Barraclough (314) remains one to keep an eye on, but should the rains come (we hope they don’t) then Ryan Brooks (210) is very much making a stake for the claim of Mendips regenmeister, as the youngster took a heat and final double. The youngsters will also getting into the jubilee spirit with a spot of fancy jingoistic fancy dress pre meet.

Rookie Bangers continue to entertain this season and it is very the case of who can stop Sam Baker (929). Two dominant finals in as many meetings see West of England Champion being the one to beat. Chrissy Jeanes (113) got some good scores to keep Baker honest in trying to keep it a fair fight for the points.

The National Bangers are back in more traditional format, as 2 Litres is the name of the game. Leading the way in the points is Big Mac (440), who is now very much a part of team BRCM who have certainly put some noses out of shape of some holy cows!

With just a few more meetings and with additional places up for both the PRI (with us in September, hard to win) and the Banger Hot Rod World Final at Ipswich (October, boring). Expect the usual suspects and maybe a few stars as it will be the last opportunity to get some seat time in world final cars. Expect Mondeos by the million!

The Special Rods are now into the meat and gravy of their season. Pete Jennings (68) leads the way and such is the closeness of the formula, last year’s Superstars see themselves struggling in the points. Jason Oliver (303) bucked that trend with a race win, but the final was a close run thing as perennial grade moaner and all round good egg Leah Bennett (26) came so, so close to a maiden win in the final, which Tom Weeks (100) took in a repackaged motor for ’22. A short term drop to blue saw Tom Bristow (60) take a win and south coast veteran Pete “Stan The Man” Stanley (40) take another race win. Each race had a different winner, proving that this formula is one of the most competitive.

By royal appointment, dear old Liz has decreed that the ever reliable Robins should be providing some right royal appointments sunny side up facing the Mendips tarmac! At the last meeting, it was crazy day. Aaron Loader (362) was the master of going the wrong way round, Martin Dalton (58) tried to slalom (which to be fair no-one did!) but Joe Capel (30) and Pugs (154) set the ball rolling with some spectacular rolls, including one of Pugs which went the full length of the straight, end over end. Awesome stuff!

Today will see a meeting of fibreglass as the Robins meet the Caravans in what always promises to be chaotic calamity fit for a Queen!

Next time, it’s a single meet for Midsummer but it will be a back to basics bonanza, with both Unlimited and the smaller under 1800s having a basic crash attack. Expect some rarities and rubbish! They’ll be supported by the Junior Rods.