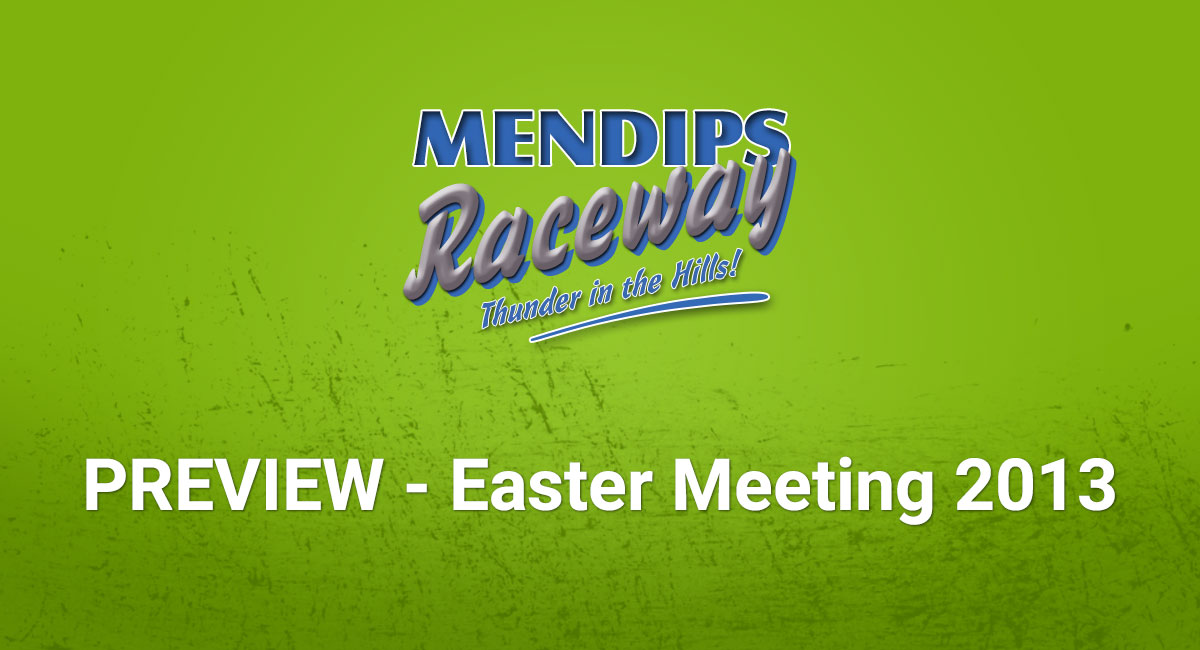 It may feel as if winter is never ending, but life and the show goes on and Mendips Raceway will be back in action for the first of the 2013 season, starting with this upcoming Easter weekend.

Easter Sunday here for the BriSCA F2 Stock Cars for many years has meant only one thing and that is the World Championship qualifying round.  Not only that, the Final will be for the annual staging of the fine Gerry Dommet Memorial trophy, remembering the man who built the track in 1968 and operated it until his death in 1998, as well as being a pioneer and leader for the sport almost since its arrival on these shores back in the 1950’s.  Over the years there has been a lot of lower graded success in this particular trophy, but not in the more recent years and 886 Chris Bradbury was the winner last year, ahead of him winning the track championship for the fifth year running.  He also took the opening round at Kings Lynn and so already has a maximum score on the board.  His 2013 tarmac car is not ready yet, so will be in last year’s car so whether that is a help of hindrance remains to be seen.  It is of course a big year for the BriSCA F2’s in the southwest region with the World Championship at Taunton, but ahead of that the Semi Final meeting here in August.  This has led to a real upsurge in interest in the area, which is very pleasing to see and also first and foremost from visiting drivers in this meeting which is how it was for many years, and how we like it and has all the ingredients of being an early season classic.

From the high speed of the F2 Stock Cars to the high speed of the Hot Rods.  They will be racing for the CWS Mears Trophy, remembering former Banger racer Tony Mears.  He was a long serving mechanic to 718 Colin White, who will be at Brands Hatch and thus not present.  He will be here later on in the year though, but it will give last year’s victor 282 Steve Hunt along with 258 James Griggs and the returning 780 Mike Loosemore a chance to get some early points on the board.

The Rookie Bangers will complete the programme on Sunday, coming on the back of a good meetings again last year, and this will again be the first of more meetings here this year, including a team meeting in July, which will certainly get that day, in memory of Phil ‘Filo’ Cleverley back to its roots.  There really has been a variety of cars and drivers on the track over the past few seasons in the rookies and that is really what the essence of this form of Banger racing is all about.  129 Lee Dalton ended up as the highest Mendips Raceway registered driver in the points last season but the ones who headed the way were the Devon based Sparkes brothers, with 246 Ryan actually topping the chart and then was pipped to the West of England Championship in October by big brother 247 Richard.  They will be up there all season long, but as ever in any form of Banger racing, anything can happen.

Easter Monday will see a good mix of classes with the afore mentioned Hearse and Limo (National) Bangers, the Special Rods, Junior Rods and Reliant Robins.  The entries for the Special Rods have once again come in well over the closed season, and whilst some have had some racing at Ringwood during the off-season, others are champing at the bit to get on track and burn some Yokohama rubber. The nature of the class also often means that a quick lower grader will get away, and as ever there are several new faces around this year, but the ones they will have to beat will be the established ones, such as 23 Ross Stuckey who took the points for the second year running and third time overall last year in a typically close battle with 47 Richard Howard and 18 Russ Colenut.  Later in the year they will have a mini-summer series for some added interest.

For the Bangers, as ever there are some very big cars set to grace the track for this with Daimler Limo’s and Hearses as well as the Granada versions of both, which are big enough in themselves and some very large American tin too.  Last year 523 John Swanbrough was the winner of the Final, before DD specialist 363 Sam Trim did what he so often does and outlasted them all to win that once again.  With big names in big cars, a huge entry simply isn’t needed – this will be action and entertainment guaranteed.

The Reliant Robins have had a few ORCi rule changes since last year, which will not really effect many of the drivers who will have their fun on three wheels and once again a good entry is expected where the ones to watch will be the points champion 499 Lee Charles.  As time goes on, a lot of those who have not really raced anything before have really started to get the hang of things and could well be capable of upsetting the form book.  But as ever, expect plenty of rollovers as the cars that are not really cars (remember you can still drive one on the road on a motorbike licence) are driven as they were never designed to be!

The Junior Rods will round things out and there were several new faces and names as well as new cars back on practice and whilst it is/was good to see that the Mini – which was the only car permitted for so long, was still very much on the pace it is also pleasing to see the variety of cars now coming out which was the intended change two years ago.  This includes now two Austin A40’s!  510 Sid Harrison took the points last season whilst the big improvers were 87 Callum Richards and 273 Zoe Cambridge and they will be looking to build on that this season as the youngsters look to follow the path of so many others with names such as Maidment, Mikulla, Stuckey, Trim, Charles and countless others.

Remember that we are now starting each meeting at 1.00pm, half an hour earlier than previous years, getting underway with the grand parade of cars at that time at each meeting.