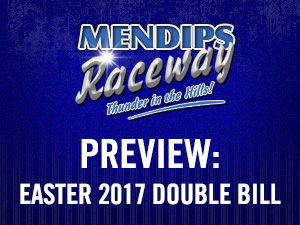 Another busy bank holiday weekend here at Mendips, the first of the year, as the season properly gets into the swing of things, with a busy weekend of action over both the Easter Sunday and Monday.

Sunday sees the F2 and Rookie Bangers season get underway, with able support from Hot Rods. Monday sees the Special and Junior Rods, play a calming support to the madness of Robins and pure Vandemonium!!

It promises to be a busy and entertaining season for the F2’s. the highlight of which will be the British Championship over the Midsummer Weekend in June. Keep an eye to our website – www.mendipsraceway.com for a special section dedicated to the event coming soon.

It’s all about the World Final though today, as our annual Qualifying Round is the top prize on offer. Points scored count towards a semi final place at the Racewall, Cowdenbeath. The final venue has been the source of some protraction over the closed season, with Coventry, the initial venue, shutting its doors in the closed season. It has now been moved to King’s Lynn. Rest assured, 2018 will have no such problems – as it’s here! Drivers from far and wide – indeed the 4 corners of the country, are with us. Scotland’s Dennis Middler (41), Northern Ireland’s Bradley McKinstry (NI747), join top of the national points, regular visitor Cambridgeshire’s Dave Polley (38). Defending British Champion, Chris Burgoyne (647) could be with us for an early sortie before the championship weekend.

Locally, track champion Chris Mikulla (522) could be a miss as partner Grace is heavily pregnant. Steve Gilbert (542) has a footballing injury – a broken metatarsal! But all eyes are on ex Junior Rod champion Becky Pearce (660) as she takes her tentative steps to play with the big boys!

Today they race for the Gerry Dommett Trophy, named after our former promoter and stock car pioneer – who built this very track. Defending is Paul Rice (890) who will be a favourite from the yellow grade…

Another season for the nudge and spinners gets underway, the entry way in for many racers, young, old, seasoned or green to have fun with contact but not destruction. Last Season it was Dan Rice (138) who took the track championship. Other ones to watch are the Exeter based Styles brothers Kev (38) and Ben (83), Cookie (70) and Tom Davey (54). Also we see the Mendips Driver of the Year 2016, as voted by his peers at the Presentation Evening , the Mighty Quinn – Deano (27) out for another go, always with a grin, regardless of the win…

The girls get an opportunity to race for a great cause – the FORDS oval benevolent fund, helping drivers who are injured in the line of entertaining us. Sisters, daughters, and the long suffering ‘er indoors will get their chance to race on the hallowed Mendips tarmac, all in the name of the excellent cause.
One wonders if the drivers will be hoping for their precious to come back in one piece, whether it will be their car or their missus!!!

Encouraging numbers from the Hot Rods in March, with a few newcomers, however it was very much the same story, as Colin White (718) took a faultless hat trick.
The CWS Mears trophy is defended by track Champion James Griggs (258) who will be looking to stop the wily White from ruling the roost.

White Van Man needs new wheels, as cutting up, smashing up and general disregard for the rules of the road are encouraged as the backbone of Britain

There are early entries from the Smiler Dean Quinn (27) and… (insert a few big name bookings in here Graham)
So if your parcel hasn’t been delivered, or you can find a tradesman now you know why…
Remember, no tools are left in these vans overnight.

The Juniors are back for the second outing, and if the first day of school was anything to go by, then the Class of 2017, is going to be a cracker. In inclement conditions, the kids were alright! Charlie Pearce (88) followed in sister Becky’s footsteps by taking a heat, and Ewan Gumbleton (190) took two heats also. But the undoubted star of the show was Cameron McColm (34) who took two seconds before taking the final last time out.

Our three wheeled free wheeling friends are back again for another season of unstable racing fun. Whilst the wobble and roll is occupational hazard of the plastic pig pilot, they race as well as entertain too. Last year’s track championship went right down to the wire, with Tim Weare (304) taking it by a single point from Russ Gillingham (26). With a basic meeting planned, it will be very much about getting their eyes in, albeit in some cases upside down!

The Budget non contact formula gets underway for season 2017. Defending track champion Andy Pincott (85) signed off a successful season with win last time in the biggest domestic race of the season – the West of England.

Both meetings get under away from 1pm – be there!