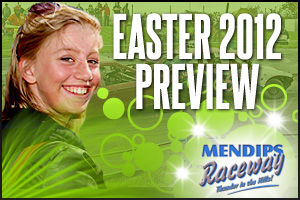 Mendips Raceway will be back in action over the two days of Easter Sunday and Easter Monday.

The Sunday for the BriSCA F2 Stock Cars for many years has meant only one thing and that is the World Championship qualifying round. Not only that, the Final will be for the annual staging of the fine Gerry Dommet Memorial trophy, remembering the man who built the track in 1968 and operated it until his death in 1998, as well as being a pioneer and leader for the sport almost since its arrival on these shores back in the 1950’s.

Over the years there has been a lot of lower graded success in this particular trophy, but the past two years have seen that trend bucked with 152 Mick Sworder two years ago, now blazing a trail in the BriSCA F1’s and then last year 676 Neil Hooper beat 886 Chris Bradbury to the line, who ultimately went on to take the track championship for the fourth year running.

Bradbury took the opening round at Kings Lynn and so already has a maximum score on the board, and having now got to grips with his new car he could be the one to watch.

Hooper, who also has a new car for the year will have something to say about that and another with new machinery at his disposal, and a Final win already under his belt this season is local boy 522 Chris Mikulla.

It will not be plain sailing though, there are plenty of other potential winners across all the grades and with drivers coming from all four corners of the country it should be a thrilling start to the Stock Car season at Mendips Raceway.

From the high speed of the F2 Stock Cars to the high speed of the Hot Rods, who were in good form at our opening meeting last month, none more than the experienced ‘big two’ with points champion 282 Steve Hunt the winner in the heats, showing some good pace in doing so before 718 Colin White won the Final. They will be racing for the CWS Mears Trophy, remembering former Banger racer Tony Mears. He was a long serving mechanic to Colin who won it last year and will be looking to keep it.

The Rookie Bangers will complete the programme on Sunday, coming on the back of a good meetings again last year, and this will again be the first of five here for 2012, including the West of England Championship at the end of the season, which, perhaps controversially to some has switched from National spec to ‘rookie’ spec this year.

There really has been a variety of cars and drivers on the track over the past few seasons in the rookies and that is really what the essence of this form of Banger racing is all about. It is not all about the rough stuff, that is for what we now know as National Bangers, nudge and spin is what it is all about and it’s a way of getting a car, stripping it out and having some on track fun with it and all within the reasonable safety rules and regulations etc of course. Without the ‘fear’ of getting a nice old car wrecked before having chance to have a thrash with it, which is sometimes part and parcel with the hardcore National Bangers, we have seen several old and rare cars race in this form of Banger racing and new drivers which is good and several female competitors too, which is also good to see.

54 Tom Davey aka ‘Tom Foolery’ ended up as the points champion last year and it was 246 Ryan Sparkes who took Final victory at this corresponding meeting last year, and he will be back again this year along with a host of others on what looks to be a split hear format and qualifiers only Final.

On to Monday entries for the Special Rods have once again come in well over the closed season, and having had to wait a week or two longer than normal to get their season underway, they are champing at the bit to get on track and burn some Yokohama rubber. They are very keen, there is even now a Facebook page dedicated to the Special Rods! The nature of the class also often means that a quick lower grader will get away, and there are several new faces around this year, including former Banger men 27 Dean Quinn and 440 Steve Griffin, as well as 304 Tim Weare so what is to say that one, or more of the other new ones could spring a surprise on the establishment?

The 2011 season ended on a very close note with 210 Paul Barnes taking the West of England Championship and 23 Ross Stuckey winning the points on the very last bend of the last race. It does not get much closer than that, and expect more of the same today and throughout the upcoming season.

Once again the Hearses and Limos will be the feature of the National Bangers for the “Matches and Dispatches” meeting. As ever there are some very big cars set to grace the track for this, with Daimler Limo’s and Hearses as well as the Granada versions of both, which are big enough in themselves and some very large American tin too.

Last year 88 Tim Wood was the winner of the Final, before DD specialist 363 Sam Trim did what he so often does and outlasted them all to win that. With an entry hitting and passing 20 at the time of writing, a very busy track is gurateneed! It goes from one extreme to the other, as the previous National Banger encounter last month was for the Micro’s when 311 Danny Allen was the Final winner.

The Reliant Robins will have their fun on three wheels and once again a good entry is expected where the ones to watch could will be 87 Barry Richards, a driver of vast experience in several formulae and just races for fun these days although he was beaten to the points last season by 499 Lee Charles.

As time goes on, a lot of those who have not really raced anything before have really started to get the hang of things and could well be capable of upsetting the form book. But as ever, expect plenty of rollovers as the cars that are not really cars (remember you can still drive one on the road on a motorbike licence) are driven as they were never designed to be!

The Junior Rods will round things out on Monday, and they were part of the opening meeting last month where there were several new faces and names as well as new cars, but it was good to see that the Mini – which was the only car permitted for so long, was still very much on the pace. 404 Macauley Mills was the Final winner, whilst 510 Sid Harrison continued from his good 2011 with some good places whilst for local girl 24 Sam Crane it was a day of mixed fortunes. Having been easily the most improved driver since last year, she took third in the Final but then had an unfortunate crash in the Allcomers. Hopefully she will be back today, and the youngsters that follow the path of so many others with names such as Mikulla, Stuckey, Trim, Charles and countless others.

Both meetings start at 1.30pm with a grand parade of all cars.