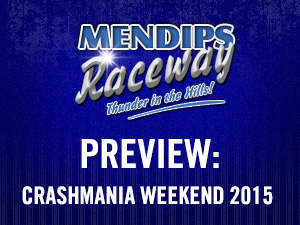 Mendips Raceway will be back in action this coming Bank Holiday weekend and we literally have something for everyone over the two meetings, and it really is crunch time in the various points chases too, and one or two of them will be or could be decided this one as we reach the conclusion of season 2015.

For the first time in a long time too, the track championship points are set to go down to the wire in the BriSCA F2 Stock Cars, who return fresh from their World Championship Semi Finals which were staged at Skegness last weekend.

Former World Champion 783 James Rygor leads the points coming into today, despite missing the last meeting. He is right back on song, but 676 Neil Hooper is right on form, having come third in his Semi Final at Skegness last weekend, Final winner in the wet here last time 111 Lewis Geach goes well here and 522 Chris Mikulla is simply under-graded off blue.  So plenty of interest, and then factor in British Champion 700 Adam Rubery who is set to defend the Marion Bennet Trophy and it becomes a mouth-watering prospect for the F2’s.

The National Bangers return for the first time since the Graham Salter Tribute in June, only this time in much smaller cars with it being the popular under 1400cc format and to add a twist, there are World Championship qualifying points for them, with eyes beginning to turn towards the big event at Ipswich in October.  67 Ricky Beasley may lead both points’ charts for the National Bangers, but he is suspended from racing and so we need to look at those behind him at this stage.  Thus 252 Steve Buglar and 262 Rob Buglar in both the World and track points as well as wily veteran 517 Scott Weldon and throw in 739 Jason Moore too will be the ones to keep an eye on.

So, amongst the typical action from the National Bangers there will be this added little bit of interest too.  Sunday will be rounded out by the Junior Rods, for the drivers aged 11-16.  The season has been a lot closer than looked like it might be the case at the first meeting back in the spring when 300 Charlie Ayles took a hat-trick of wins and coming into this penultimate meeting of the year for them Ayles has a slender lead over 946 Harry Thompson whilst the most improved driver of the year in the view of some, 66 Becky Pearce is in with a shout too, and it was 30 Joe Capel who won the Final on the day back in June.  Expect plenty of close racing from the stars of the future.

24 hours later we will be back again, and the emphasis is going to be very much on Bank Holiday Monday fun, mixed in and around the racing all culminating in the annual Caravan Race.  The Reliant Robins will have their last outing of the 2015 season, and in doing so the decider for the points shield too which is very close between last year’s winner 304 Tim Weare and 3 Dan Tythridge.

There is the annual Caterers Cup too, for the figure of eight race, won last year by Tythridge.  The Entertainers League will see more points scored too, plus, by popular demand there will be a ramp jump race too.  Thus, expect plenty of three wheeled fun and action from the Robins.

Also the last appearance of the season for the (Rookie) Bangers, after their team event last month. So, they have their points championship to be decided too.  The team event went down to a battle between ‘Pistonbroke’ and ‘Balls Out’ and two of their respective members apiece look the most likely to win the silver in 83 Ben Styles and 938 Ashley Rice.

It will, as we say all end in a great big mess and a bang with the Caravan Race for the ‘Chris and Becca Shield’ won last year by 189 Jamie Knox.  Always an entertaining way to end the summer - Of which we talk, the all Sierra Special Rods will have the second and concluding round of the Summer Series, running alongside the season long points.

720 Dan Latimer leads both after a storming meeting here in July but the points overall are very close, with recently crowned Southern Champion 426 Russ Colenut and defending points holder very close and 993 Darren Foss and that man 304 Tim Weare not far out of it either.  That will all be decided along with the West of England Championship in October, but today will see the Summer series where Polleysport have very kindly put up four Yokohama tyres, one each for the top points scorer in each grade.

Finally, the Hot Rods return for the first time in a couple of months.  Whilst numbers have been stubbornly low, it is often said, and with good reason that a large field of cars is not always necessary in Hot Rod racing.  Earlier this month, 125 Mike Hibbert took the Outlaw World title at Ringwood and whilst he is not in with a shout of the points here, he will be looking to add the West of England Championship.

The same applies on both counts to 718 Colin White, who won both last year, but will settle for the retention of the West of England this year.  258 James Griggs leads the points, but it is very close between he and 282 Steve Hunt and unlike most years for a long time, it will not be decided today as they have an extra meeting next month.

Both meetings will get underway at 1.00pm, but do arrived earlier to watch pre-meeting practice and take a look around the pit area and see the cars and meet the drivers too.