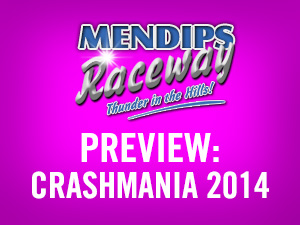 Mendips Raceway will be back in action this coming Sunday afternoon where we will all be wearing as much pink as possible, raising as much money as possible, getting underway with the now annual charity bike ride around the raceway and in the racing we will be remembering two of our good friends who were taken from us by the disease, ‘Filo’ Phil Cleverley in the Bangers and Lesley Maidment in the F2 Stock Cars, where the Pink Ribbon Trophy will be raced for on the feature Final.

In the F2 Stock Cars, reigning track champion 886 Chris Bradbury is on the side-lines injured.  The entry is headed by World Champion 783 James Rygor and we are also expecting a visit from 38 Dave Polley from East Anglia and 100 George MacMillan from Scotland.  Both played a big part in the World Championship Semi Finals last year and both generally go well here, so expect them to be amongst the front runners.  Last year 935 Nathan Maidment took an emotional win in the ‘Pink Ribbon Trophy’ and he will be looking for a successful defence.

Filo’s Crashmania for Banger teams is well established and last year switched to the ‘Rookie’ format for the first time.  Last year there was no shortage of action, some of it not strictly rule book and it resulted in the team that won the most points having the victory taken from them.  This resulted in the “Tarmac Terroists” getting the win and surprisingly they are not set to be defending, but there are still 12 teams to do battle for the trophy and there will be the ‘Spirit of Filo’ award too, presented at the end of the day.  In the points for the Rookie Bangers, 41 Sam Hollins leads them coming into the meeting after a successful Easter Sunday and he is with the “Dirty Rotters” for this time.  The “All Blacks” once again look strong, as do both of the “Balls Deep” teams and there is an interesting one, “Pink Ribbon” which is a pan-F2/Banger team featuring the afore mentioned Maidment.

The Special Rods are going to be back after a couple of months off too. 26 Andrew Bennett won two of the heats then, 51 Rob Pearce heat three before 18 Russ Colenut won the Final head of 85 Andy Pincott and 47 Richard Howard.  The latter leads the points coming into Sunday and as ever, it is very close and a bad or good meeting for any of the top ten could turn everything on to its head.  That is in the all-season points, the meeting will also see the first round of the Summer Series, a mini-series that will conclude with the double header over the Bank Holiday weekend.  So any that have not had a good 2014 so far could redeem themselves with this.  Expect the usual ones to the fore though, with the aforementioned names and throw in 23 Ross Stuckey and the rest of the Howard clan to name but a few too.

Proceedings will get underway with the traditional drivers grand parade at 1.00pm.  And remember, wear pink !