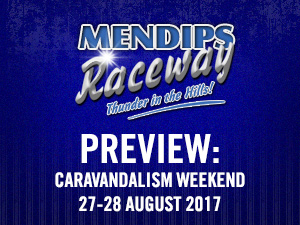 The last racing bank holiday of the year - and what a way to sort it with a busy weekend for all our formulas. From the non contact of Junior, Special and Hot Rods,  Bangers in both Rookie and Micro Banger modes, the BriSCA F2's and the complete madness of a Robins figure of 8, and the annual Caravandalism!

The stars of the show last time out as part of Filo's Crashmania put team colours to one side and go mono et mono. At Crashmania - it was Big Mac (440) and Charlie Randall (333) who stole the show, with Aaron Charles (17) also successful. With many spectators, officials and pundits alike all in agreement - the Bangers were top drawer. Plenty of crashing,"this is what they want" was the decree. Expect more of the same and no team favours! Not the largest list at the time of writing, but some all action drivers there.

The F2's come out for their penultimate appearance of the season, where the Marion Bennett Trophy is up for grabs. On the national scene it is very much the business end pf the season- with the World Final  - held at King's Lynn - is but a fortnight away. With a lot of shale meetings also on this weekend, many of the national big names are likely to be getting a mucky eye in.
If the last meeting was anything to go by, is that you don't need a great deal of cars to have a good meeting. Very much a family affair was the action as Paul Butcher (189) took top honours in the Pink Ribbon Trophy from last year's winner - new son in law Nathan Maidment (935). With 2 heat wins last time out, Steve Gilbert (542) will be looking to take his car to a final win which has so far eluded him this season. Former Saloon driver Ben Goddard (895) took a career first win also.  Former world champion James Rygor (783) is back to have another go at the Mendips also. For the local form man Maidment (935) it is another opportunity to cash in on the absence of points leader Gordon Moodie (7) the gap of 35 points - very achievable to over haul!

The 11-16 year olds in the small cars are back for the first time since the abandoned final of the British Championship Weekend in June. Points leader Cameron McColm (34) has now reached the top age limit and has since made his somewhat spectacular debut in the bangers, ending his first race on his roof!! Behind him, there are 5 drivers within 6 points  at the top of the points. Jacob Filer (77) was a winner last time, however Danny Dent (376), Cornishman Jack Sear (856), Jacob Anderson (285), Josh Weare (36) and the last final winner Ewan Gumbleton (190) are all in contention as the youngsters' track championships comes to head!

For the first time since May, the Rookie Bangers come out to play. Ben Brice (701) leads the points and has been Mr Consistent in the Rookies. Last time out Chris Neville (109) took the final, but it was very much a day for the lower graders as Sam Ghey (386), Seb Burns (715) and Kenny Gabriel (720) taking the wins. With this the last meeting for the rookies this year - it really is all to play for with both Rices, Ash (938) and Dan (138) looking to catch up.

It's the biggest day domestically, for the Hot Rods as they contest their West of England championship. Their entry is headed up by new Outlaw Hot Rod World Champion, Colin White (718) who added another world title to his burgeoning trophy cabinet. However, the outgoing World Champion James Griggs (258) is looking to sew up another track championship with a meeting to spare. Mark Shelper (788) is looking to stop that as well. The West of England is the top prize - and domestically an FA Cup equivalent and we should see a few more drivers coming to have a go.

After an improved showing for the budget non contact class, the numbers are looking good! Last time, Dan Latimer (720) did his track championship hopes no harm at all with a dominant heat and final win double, closing the gap on Russ Colenut (426). In a guest appearance, banger boy Dean Quinn (27) repaid his less than complimentary social media retort about the formula with a win also! With a rare win for Scania Dave (831) in the other heat proved that the racing was again a close run affair. Consistency is the key, and after 3 podiums last time out, expect big things from Tim Weare (304) who will be looking for a better event this time round.

In what has been another classic season for the three wheelers, it comes to a head as the track championship is decided today. 4 drivers can win it still. Defending champion Tim Weare (304) leads the way, with Jerry Weeks (100), Russ Gillingham (26) and to a lesser extent Josh Sale (392) could all end up top honours coming the end of the day. Indeed Weeks will be a quandry.... as he leads the Entertainer's League. Will he roll and entertain or will he go for the win??? As is tradition - the season closes with the highly destructive, highly entertaining and highly unstable figure of 8 race, as the tactics of flat out or tip toe across the crossover, will be the order of the day. Mental racing, but just an appetizer for...

Wanton destruction of the scourge of the motorways as the race of the season for the fans of destruction, as everything that the Driving Standards Agency Trailer Test is thrown out of the window, as cars and caravans get destroyed in spectacular fashion! Once again the interest and entries out weighed the amount we can safely hold for the race! Last year's victorious driver is/was/is the nutter in chief Dean Quinn (27). One not to be missed!!!

Both meetings start at 1pm - gates open at 11am!