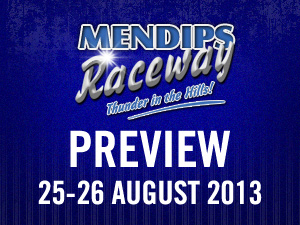 The last Bank Holiday before Christmas – yes, sad but true, is looming up but on the upside that means on thing; two days of oval race action at Mendips Raceway is coming up and there looks to be plenty of that, and two of the most popular novelty events too.

The Bangers are with us over both days are the Rookie Bangers where the emphasis is more on ‘racing to win’ and ‘spin and turn’ rather than any out and out wrecking and blowing up and with slightly lesser preparation involved it is designed to encourage potential drivers from the terraces to the track and it certainly has the desired effect with good entries expected on both Sunday and Monday which include a few son’s of Banger drivers from the past, and several others that are set to have their first taste of competing at Mendips, even if they have had some experience on other circuits.  The Rookies were last here last month when they had the Crashmania team meeting for the first time, and it wasn’t a particularly satisfactory outcome when the winning team were disqualified due to the antics of one of their number, and instead the ‘Tarmac Terroists’ took the victory.  They look set to be here again, and one of them 475 Ben Sealy comes into the meeting leading the points.  It will not be the decider this weekend though, that will come in October and the West of England Championship so still plenty more to race for them.  The Banger fun will all culminate on Monday as we will reach Carvandalism 11.  The annual caravan race for the Chris and Becca Trophy, which was won last year by 49 Rob Bevan, and there is extra money on offer for well presented caravans and it looks likely that we will see a fair few meet their end on Monday afternoon, which will be a perfect tonic for all those who despair when the M5 is clogged with them at times!

The youngsters in the Junior Rods will reach their penultimate meeting of the season, the Final will come in October and in their points battle and in what has been a very close battle but 87 Callum Richards’ heat and Final double last time looks to be the springboard that could take him to silver, but he will need to capitalise on it both today and at the West of England meeting.   Numbers continue to be steady with newcomers coming in all the time, which justifies the decision to stick with non-contact racing and also when it was opened up to other cars than Minis now three years ago.

The August Bank Holiday Monday always has a special feel about it especially with the day concluding with the annual afore mentioned caravan race.   We will have the last of the season for the Reliant Robins, who have once again had a good season of racing – these ‘cars’ were never designed to be racing vehicles, and the fun and games as the drivers try to do so is legendary.  And this is the only track in the country where you can see Figure of Eight racing on the three wheels, where they will go for the annual Caterers Cup which was won last year by 499 Lee Charles once again, but last time when they went for the World Cup 78 Mark Bowskill took the honours.   For the Hot Rods, the points championship reached its conclusion here at the meeting in June with 718 Colin White taking the title in what were slightly controversial circumstances, when he was docked from winning the Final at the end of June after a late clash with 258 James Griggs.  He just pipped 282 Steve Hunt by two points, Steve himself won a big trophy in recent weeks at Ringwood and will be looking to add to that this time as the West of England Championship will be their main race. It was won last year by White who may not be present owing to his long circuit racing commitments.   The all Sierra Special Rods will round out the programme on both days with their usual brand of close and competitive racing, and a very rare treat for them to get an outing two days running and they are looking to capitalise on it with the availability of overnight camping and everything that goes with that.  Obviously others are very local to us here at the track.  It will be the concluding rounds of the Summer Series which had its first round last month.  122 Joe Rowe took two heat wins but couldn’t make the hat-trick in the Final which went to 175 Kev Scammel and with the other heat going to 85 Andy Pincott the honours were spread and as a consequence the points in the series are close coming into the weekend.  In the season long points, which includes the grades, 47 Richard Howard is back at the top but very close behind 18 Russ Colenut and 122 Rowe, so they have everything to go for.. Like the Junior Rods they gear themselves up for their big climax to the year with their own West of England Championship, coming on October 6.

Both meetings will get underway with the traditional grand parade at 1.00pm – and the Caravan Race will take place at approximately 4.30pm on Monday afternoon.