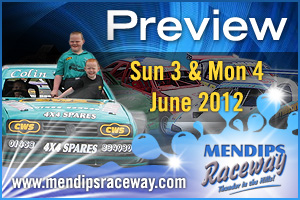 This coming weekend it is more than just ‘another’ Bank Holiday weekend of course, as we celebrate Queen Elizabeth II’s diamond jubilee with celebrations up and down the land, and we are of course doing our part at Mendips Raceway but first and foremost these two days mean another couple of afternoons of oval racing in its varied forms, with something for everyone over the two sessions we have for you on Sunday and Monday afternoon.

Naturally starting with Sunday, the BriSCA F2 Stock Cars return and we will have the first round of the Rookies Reward for the white and yellow grade drivers which will be over three qualifying rounds this year, but with all the good funding just as in previous years and this will be the eleventh consecutive year that it has been run.  954 Jamie Beere was the eventual winner last year although he has moved back up to the blue grade this month.

The annual Marion Bennett Trophy is the one they will be going for in the Final, obviously the ‘Master of the Mendips’ 886 Chris Bradbury will be the favourite, going for his third Final in a row but last year he just couldn’t get hold of 53 Phil Mann, who made his long journey down from the northwest worthwhile by taking the win.

Just like the previous Bank Holiday weekend last month the National Bangers have under 1800cc and unlimited to race for. The unders last time saw 262 Rob ‘Rooner’ Buglar score some unique domination as he took both the heats, the Final and then won the destruction derby too! Suffice to say this has propelled him to the top of the points, and he is set for another trip from the south coast this weekend. The bigger cars throw up a different avenue.

It cannot be compared to ‘Thunderbolt’ last time, which is one of our biggest meetings of the year so by in large (no pun intended) it will be our locals and regulars holding sway on Monday, and there are a pleasing number of them booked in all looking to add to track championship points as well as the all important World Championship points, the other chart that young 262 now leads. For the first time in a few years ‘Thunderbolt’ went away from a Mendips or southwest driver with 382 Jack Foster from the north of England scoring the win on what was, as ever a lively day. As ever though, expect the unexpected, even with our regulars – and whether there are some visiting drivers, remains to be seen but that will just add to the drama.

The Reliant Robins will be with us on Sunday, for the third running of ‘Crazy Day’ to add some extra fun into the three wheelers, which are and were never intended to be a serious racing form in any case. Things will get going with a ‘wrong way’ race and then there will be a ‘football’ race (just wait and see….) and then a normal race to round things out. Suffice to say, these races will obviously throw the form book out of the window somewhat.

499 Lee Charles was beaten for the first time this season last time when he rolled in heat two and 444 Mark Loader went on to win, but it still means that it is five from six for Charles and will be the one to watch again.

Monday will see a return to the all Sierra Special Rods who really have been on good form again this year with some very close racing, and some first time winners which is exactly what we want to see – and all drivers racing on an affordable budget too, which is the essence of the class.

120 Andy Latimer held on for a very good Final win last time out, as the lower graders simply got away leaving the higher graded drivers to fight over the scraps. However, there has now been the re-grading which should shake things up, and it is still 210 Paul Barnes who leads the points, and he did manage a heat win last time and as ever, it will be close.

The youngsters in the Junior Rods have put on their own brand of racing here this year, with the drivers learning and honing their racing skills. The Mini remains the mainstay but there are several new marques coming in this year with the rules opened out to allow other 1000cc cars.

Last Bank Holiday Monday 404 Macauley Mills took the Final win and just a single point separate he and 510 Sid Harrison at the top of the chart.

Finally, last but definitely not least – especially in speed, we will see the Hot Rods back on track on Monday for the annual Andy and Loreen Trophy. 718 Colin White has shown his usual speed in the first two meetings, but has had some bad luck too.

282 Steve Hunt leads the points but it would appear that the ‘big two’ in the Hot Rods this year could have company, as 258 James Griggs has got right up to speed and came very close to the overall win last time, and if 904 Wilson Hamilton puts in an appearance then it could be a four way battle for supremacy, or maybe more!