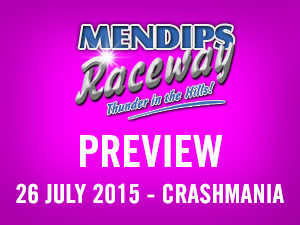 Mendips Raceway will be back in action this coming Sunday where we have our traditional end of July date featuring the return of the popular Banger team racing, the BriSCA F2 Stock Cars and the first round of the summer mini-series for the all Sierra Special Rods. All with a poignant theme as we will be supporting cancer research, wearing as much pink as possible, raising as much money as possible, getting underway with a charity tyre throw and in the racing we will be remembering two of our good friends who were taken from us by the disease, ‘Filo’ Phil Cleverley in the Bangers and Lesley Maidment in the F2 Stock Cars, where the Pink Ribbon Trophy will be raced for on the feature Final.

It has been a couple of months since the F2 Stock Cars were with us, and in such a busy class – the busiest of them all, much changes.  Last time 522 Chris Mikulla took the Final win, and he could be looking a favourite for the track championship as the season moves into its second half as 783 James Rygor, who leads the points has been missing the past few weeks.

We are anticipating a visit from the reigning World Champion 1 George MacMillan all the way from Scotland, who last raced here at Easter and is enjoying a great year under the Gold roof.   Last year the Rink Ribbon Trophy was won by 886 Chris Bradbury, who has now retired from F2 racing and this, and the remainder of the season here for the Stock Car class is looking wide open.

Filo’s Crashmania for Banger teams is well established and there are some very strong looking teams, so it is not going to be easy to win this such as the “Dirty Rotters” who have three teams, including World Champion in this code 113 Chris Jeanes in one and all looking like they could be potential winners whilst “Piston Broke” feature all four winners the previous time the Bangers raced here and that has to count for something, and the “All Blacks”, previous winners on more than one occasion have bags of experience as do the “Old Farts”.

The winning team last year were “Balls Out” and whilst they are back, not all who took the honours 12 months ago are, but never the less look strong and not to be discounted.

Last but not least the Special Rods are back having not been here since the May Bank Holiday weekend either.  Winners then saw 720 Dan Latimer win two and one each for 5 Alan Lettley and 108 Steve Brown, which as his first in the Sierras at Mendips at least.  As is always the case the points is very close and as they, like the F2’s move into the second half of the 2015 season they have it all to play for.

Reigning points champion 426 Russ Colenut has a ten point lead ahead of 304 Tim Weare and 730 Scott Sealey but a bad or good meeting for any of the top ten could turn everything on to its head.  That is in the all-season points, today will also see the first round of the Summer Series, a mini-series that will conclude over the Bank Holiday weekend.  So any that have not had a good 2014 so far could redeem themselves with this.

Events will commence at 1.00pm – but get to the track before that to enjoy pre-meeting practice, a visit to the track shop and a walk around the pit area where you can see the cars close up and also meet the drivers.