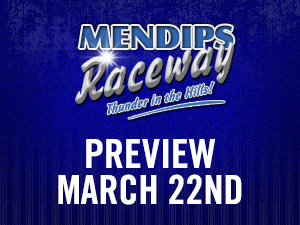 Mendips Raceway will be back in action this coming Sunday afternoon at 1.00pm with the National Micro Bangers headlining the day along with the Hot Rods, 11-16 year olds in the Junior Rods and a bit of turning back the clock with the annual outing for the Heritage F2 Stock Cars too.

It is often said that the Micros are small in size, big on action and with the numbers having hit and passed the 65 car mark at the time of writing.  All the cars are up to 1200cc (with a 1300cc Ford KA permitted, and likely to be a popular choice) and with World Championship qualifying points at stake as well as regular track points, the drivers have it all to go for as well as the crash too.

It will all of course build up to the Destruction Derby at the end of the day.  Last year 54 Tom Davey successfully defended the points title and will be in attendance once again whilst veteran 517 Scott Weldon had another fine year and was crowned Driver of the Year at our Presentation Evening last month whilst others to look out for will include 114 Liam Lake, who has been putting in a lot of travelling miles during our closed season to continue to race and the all-action but yet super-fast Buglar brothers of 252 Steve ‘Boogie’ and 262 Rob ‘Roona’.

And just check out the number of drivers making the trip over the Severn. Wales looks like it will be almost half empty!
Our good friends from the Principality always put on a plucky show when they come here but could one or two of them spring a surprise?  As ever it will be a good and spectacular start to the Banger year here at Mendips and one in which Rob Mills and his team are set to inject some new ideas into the scene.

The numbers in the Hot Rods remain solid and with some new names and faces for this new season there is continued optimism, and an extra date for them too.  Last year it was 718 Colin White who once again stamped his authority by winning both the points and West of England Champion.  Colin continues to be as keen as ever, racing many a different class in different countries and as such he has said that he is not going to be racing his Hot Rod as much in 2015.  Whether this will open up the opportunities for others remains to be seen but look out for the likes of 125 Mike Hibberd and 258 James Griggs who are always there and there about as well as stalwart racer 205 Mike Norton.

From the high speed Rods to the Junior version, with the youngsters in the Junior Rods’ numbers looking set to improve even more this year with several newcomers to the ranks.  This is a natural progression with a few from last year having reached the retirement age.  One who hasn’t though is joint points champion and West of England Champion 300 Charlie Ayles who absolutely romped to the latter at the end of last season.  He has a new car for this year and will be the one to watch and beat once again along with 34 Cameron McColm, 190 Ewan Gumbleton and 87 Callum Richards to name but three. Although, could one of the new faces spring a surprise?  It has happened before and will again.

When we opened in 1969 the first race was for the BriSCA F2 Stock Cars.  The 2015 version will be with us in two weeks’ time, but back then 46 years ago the many thousands that came to that first meeting would have seen something like you will see today with the Heritage FII Stock Cars, which are period replica cars from 1961 to 1972, the latter being the era when the cars started to transform from modified Saloons into the single seat specials we know today.

Several of the drivers are period of the said time too and whilst the machinery is indeed ‘old’, the speeds the drivers get to and the show that is produced is impressive.  Last year 533 Andy Kaye was a double winner before 773 Nick Whitney beat him to the first place in the Final.  This will be the first outing of the season, now their 12th as a fully-fledged national racing formula rather than one of demonstration, their first actual ‘race’ having been here back in June 2004.