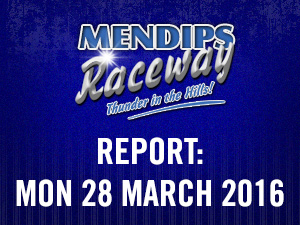 Although on a few occasions there was a few spots of rain the rain held off until after the meeting had finished and the sun even showed its face on a couple of occasions!!
304 Tim Weare was on treble duty racing the Banger Vans, Special Rods and Robins and 58 Martin Dalton was racing the Banger Vans and the Robins.

In the Van Bangers 27 Dean Quinn and 189 Jamie Knox, won the Top Tin Awards, most drivers had Ford Transits apart from 9 Mavis in a Bedford CF Campervan, and 54 Tom Davey in a Citroen Relay, and 440 Mac Mills in a LDV.  In the 1st Heat there were 10 Vans out,27 Dean Quinn eventually managed to force his way past 256 Jamie Turner for the lead Dalton was getting stuck in and spun 54 Tom Davey, and 189 Jamie Knox T-boned Davey, and Davey later returned the favour and spun Dalton out, Turner got spun out, and Davey got T-Boned by 189 Jamie Knox. Quinn went onto win from 262 Roona. 10 Vans also made it out for the 2nd Heat amongst the pushing  Mavis was receiving a lot of attention!! Dalton and Davey was having fun and games, and Weare spun Dalton out, and Roona spun Davey out, and Knox spun Turner, and Weare spun 199 Tom Pearce, and Knox got spun out and there was a pile up involving Dalton, Quinn, Knox, and Pearce. Roona took the win, from Quinn, 9 Vans made it out for the Final amongst the pushing, Weare spun Turner, Knox spun Mavis, and Pearce T-Boned Mavis big time wrecking his caravan, then went round and T-Boned him again! Pearce spun Davey, then Davey re-joined and Pearce picked him up and put him into the wall, and Turner Jacked up Pearce, and there was a stoppage for Turner, and the race was declared as, Roona the winner, from Quinn, Weare. 5 Vans made it out for the allcomer’s into a D/D with one Van waiting for the D/D. Quinn won the allcomers race from Roona. Amongst the action in the D/D Weare got spun out and, Turner T-Boned Pearce, and Weare was the meat in the sandwich between Pearce, and Quinn, and Mills jacked up Quinn, then Mills and Quinn backed out, and Quinn run into the back of Mills which killed Quinn’s Van, leaving Mill’s van the only one running.

In the Special Rods there were 7 white tops who all had a good pace, again there was a lot of close racing and overtaking they was running a 2/3rds format with an all in Final. 18 cars came out for the 1st Heat, 29 Dave Dalton opted to start of the grid as new comer and was doing well until somebody accidently ran into the back of him 35 Mark Johns outdaragged pole sitter 831 Dave Benford for the early lead from 45 Tim Seaford, 108 Steve Brown quickly got up from 7th to 4th with 43 Andy Howard closely behind him. Brown and A. Howard found a way past Seaford, and Benford then Johns mostly on the outside to take the lead, Brown went on to win from, A. Howard. 16 cars made it out for the 2nd heat Johns outdragged pole sitter 556 Stuart Garland for the early lead from Dalton, and 701 Ben Brice was quickly up from 6th to 4th, then Dalton and Brice went round the outside of Garland for 2nd and 3rd, Garland had a spin on the pit bend and then 47 Richard Howard ended up in the turnstile bend wall bringing out the reds Johns led the re-start from Dalton, Brice, then 41 Dene Howard, Johns went wide and Dalton didn’t need a 2nd invite to take the lead closely followed by Brice and D.Howard. D.Howard then tried the outside of Brice but couldn’t make it stick and dropped a couple of places and tangled with Brown sending them both into a ½ spin and out of the running, leaving them stranded for a bit. 5 Alan Lettley, and 426 Russ Colenut had a good battle for 2nd which Colenut eventually got the better off, Brice went on to win from Colenut (from 16th on the grid). There were 14 cars out for the 3rd heat Johns took the early lead from, Seaford, then, Dalton, D.Howard was quickly up to 4th from 7th on the grid, and 85 Andy Pincott quickly from 8th to 5th, and D.Howard, and Pincott past the lead three cars mostly out outside, and Dalton retired, D.Howard went onto take the win from, Pincott, then.  19 cars made it out for the Final Benford outdragged pole sitter Garland for the early lead Seaford then went round the outside of Benford to relieve him of the lead Garland got back up to 2nd for a while with Brice behind him from D.Howard then Pincott, then Brice found a way past Garland followed by the rest of the pack, then D.Howard and Pincott went round the outside of Brice for 2nd, R.Howard had a half spin and was collected by 192 Ashley Raymond and R.Howard lost a wheel bringing out the reds, Seaford led the re-start from D.Howard then, Pincott, then Brice, on the last few laps Seaford went wide and D.Howard nipped up his inside, and Seaford hit the fence, and as Seaford was crawling around the outside Benford accidently jacked him up!! D.Howard went on to take the win from Pincott, then Brice.