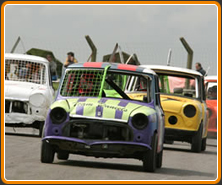 On Sunday March 29th at the Mendips Raceway the season opens after the really long winter we have had. Our first 2009 presentation has Rookie Bangers, Special Rods and MiniRods, which is a good way to get the season underway, and judging by the enormous number of cars that were here on Practice Day, nearly ninety, we are in for a good season,. We have made a definite policy move this year to give more racing to our local drivers, and this means that all of the non contact formulae will have an extra meeting.

MiniRods, the 11-16 year olds starter formula will be on the programme, and despite Minis being a little harder to find, we have some new recruits taking their first steps out onto the Raceway . Several age retirements took place this winter, but there are quite a number of new drivers, notably Aston Burt(446) son of  Jason, Sam Bartlett (91), son of Mark, and Daniel Steeds, son of Mister Steeds, who was riding round on Practice Day in the passengers seat showing his son the racing lines!

Steve Sayer(60) will giving up the silver roof  to Sam May(501) who was one of the most improved drivers last year, but it was neck and neck with Tony Munden (11) for the Points Championship right up till the last meeting. Another fast riser was Joe Rowe (122) who has now made the move into the Special Rod formula, which is the stepping stone to adult formulae, and has been taken by many of our now adult racers.

Providing the contact action will be Rookie Bangers, which is the first of four meetings this year for the slightly more refined version of National Bangers, where the hits are not quite as hard, but the skill in pushing and shoving and spinning your opponents is definitely to the fore. The drivers, as usual, are a combination of National Banger drivers and genuine Rookies, who have not raced before, in a variety of cars up to 1800cc.

Special Rods make up the third formula, and there are also new drivers to be seen here, as well as all the established stars back in the fray. The big news for the non contact saloons is that this year they take a step forward by using a control tyre. Gone are the days of wondering which tyre works best, as all driver will now be racing on the Yokohama A021 tyre that is used on the Brisca F2 stock cars. This had been discussed for quite a while, since the early part of the season, when returnee Craig Harris(39) found some super sticky Toyo track day tyres, that were clearly better than the rest, and the Yokohama, whilst the more expensive of the options, was judged to be the most consistent quality, and was crucially available second hand from the F2, Lightning Rod, and Stock Rod drivers.

Our next presentations are Easter Sunday and Monday, the 12th and 13th of April with the annual Formula Two Stock Car World Championship Qualifying Round on Sunday, and the Gerry Dommett Memorial Trophy,  Hot Rod racing , and Banger racing both days-Rookies on Sunday and the fascinating Matches and Despatches meeting Monday, for Hearse and Limousine all action National Bangers! You will be very welcome to join us