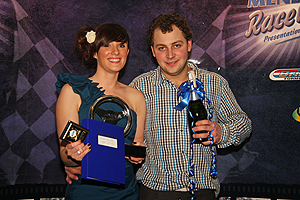 This weekend we feature a three formula programme of events that has everything from the super fast and sophisticated Hot Rods, through the budget racers formula, the Special Rods, to the bash and crash of the National Bangers, today racing in an under 1200cc guise.

It seems a long time since last October, but there have been two Mendips Raceway events since-the annual Dinner and Dance on February 5th and the Practice Day on March 5th. The Dinner always features the season long trophy presentations, and culminates in the announcement of the Driver of the Year , which was won this year by 363 Sam Trim, to universal applause and acclaim, for his outstanding performances in the National Bangers in the 2010 season. Sam led the home drivers in a campaign of attrition against the visiting Midnight Runners drivers, and prevented them winning very much at all, which gave the Mendips Raceway drivers wins in all the major banger events of 2010.  Sam will be back in 2011, including today, and we are all looking forward to more spectacular entertainment from the banger factory just down the lane!

National Bangers are titled the Micro Massacre, and is for cars up to 1200cc. Many tracks run meetings like this, but it is a long time since we have done, in fact not since the series of Metro Massacres that we ran from 2001 onwards, which were always popular. This meeting is led by driver demand, and there should be an enormous variety of cars being raced today, form Fiestas to Ladas, with some proper old vintage stuff as well, which will be revealed on the day! Front and rear wheel drives will feature, and we had a preview on Practice Day when Novice Will Teakel(452) did some laps in a Fiat Cinquecento!

We have had very strong interest from visiting drivers, many from the south coast, and we welcome them especially on their first visit here, and admire their commitment in these days of very expensive fuel. We hope all have a good day and come back soon.

Today will also be the debut meeting in National Bangers for Sam May (501) , the latest member of the family to come of age, after a very successful career in the Minirods, and three other first time drivers are Gordon Mintram (101), Micky Ford (266) and Lee Dunhill.(tba). Finally, we welcome back Dominic Gumbleton(790) after an absence of too long, which will gladden the hearts of banger fans from the nineties and early noughties, who admired his top attitude and destructive style!

The Special Rods were here in good numbers at the Practice Day, and although there were not too many new cars on show, most of the top drivers were here honing their machinery for the new campaign. There was a new car for  Points Champion Russ Colenutt(18), and for Ross Stuckey(23), which had been displayed at the Dinner and Dance, plus new drivers Kellie Cambridge(371) Mark Johns (35), and Paul Barnes (210)-father of the top National Banger star Paul Barnes (210).  We shall also have  four Howards racing again, father Andy(43) and three sons Richard(47), Dene (41)and Sam(44), surely a record for any racing formula! This weekend we intend to run the cars in a two from three heats format, with an all in Final, which should give us bigger grids for the heats, and create more challenging races for the star grades.

The Hot Rods have some new names as well. Mavis (9) is intending to have his car back again, and has curtailed his banger activities to concentrate on the non contact division, James Griggs (258) has moved from Brisca F2 to Hot Rods, and from Cornwall, Rick Lee(578) has changed from Stock Rods to Hot Rods, so swelling the numbers in this formula for 2011. Multi World Champion Colin White(718) should be present today, although it will not be very often that we see the CWS car in 2011, because of his Ginetta Series commitments, but as always, he will bring something to the proceedings! After his long career in oval racing, his enthusiasm, and determination are undiminished, and he is always a source of advice and encouragement to all drivers.

We have four great meetings in succession at the end of April, with a Royal Wedding in between!  As Easter is very late, it is just one week before the May Day Bank Holiday, so in quick succession we hold the 2011 F2 World Qualifier, the Wusty Testimonial, followed by THUNDERBOLT 11 and the first National Banger World Qualifier all in two weeks.

Full details are on the Fixtures page.