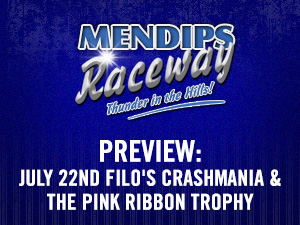 A day for the colour charts as we hit the pink with full effect as Mendips goes Pink again, with Filo’s Crashmania and the Pink Ribbon Trophy up for grabs… there are plenty of events to get involved in also to raise money for Cancer Research.

A poignant day in the world of the F2 community as they remember Lesley Maidment, mother of Nathan Maidment (935) and one time back room staff member here, for the Annual Pink Ribbon Trophy. There are additional incentives for the drivers aswell.

Defending champion, Paul Butcher, has since called time on his racing career – so a new name will be required for the trophy.

Last time out, it was Luke Wrench (560) who put a marker down for the World with a faultless final win.

The final qualifying round takes place next Thursday night for the World Semi Finals, and locally, there are plenty of our drivers in contention, including Matt Stoneman (127) who will start on the front row, and Steve Gilbert (542) and Neil Hooper (676) very much up the business end of the grid for the Semis at Barford Raceway, on August 5th.

With this weekend coming in between two big championship weekends in Skegness and Northampton, we are expecting a few visitors to get some hot laps in before the World Final – there are only 2 opportunities left!

Our good racing friend, Phil “Filo” Cleverly is remembered in the best way we know – plenty of crashing and smashing as the Micro Bangers come back to play, this time with their friends.

A modified version of the team winners are back to retain their title, with Macauley Mills and Charlie Randell heading their team, as well as former points Champion 27 Dean Quinn team The impact Squad also a leading name on the list.

Great turnouts from the budget non contact formula have seen some close and extremely competitive racing. With grade changes every meeting, it means really competitive. Very much in a supporting role today, but that doesn’t mean they will be less competitive.

Ian McLaren (181) took top honours last time – a rare sight for Formula One fans – a McLaren on the top step of the podium!

Jordan Clark (233) did well, as did Andy Latimer (120) with race wins last time out. There might be as many 6 races if the numbers are good.