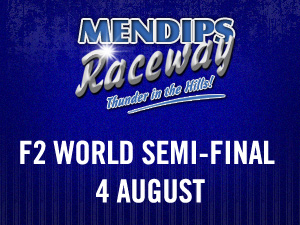 We are pleased to bring you the latest line-ups for the two F2 World Championship semi-finals taking place on August 4th along with a list of named reserves (in order).

And here we have an exclusive interview with Chris Bradbury ahead of Sunday's semi-final...

There is just the one round to go now then, after the two at the other venues beginning with ‘B’ over the last weekend, Buxton and Barford.

In truth, neither meeting was that well subscribed but once again both featured southwest based drivers putting in the miles to get the points.  It is looking very likely that they will be rewarded with good Semi Final grid positions too, which will give their home supporters something to cheer on come the 4th of next month.

Naturally, as eluded to below it is not only southwest based drivers who are our regulars as track champion in 2008, 2009, 2010, 2011 and 2012 886 Chris Bradbury is from the Royal County of Berkshire and he did not even need to make a trip to Buxton to make sure his place at the top of the chart was secure, as it already was.  He instead took yet another Final win at Taunton, his sixth in a row there on Sunday.   Probably the most significant change was that of 218 Rob Speak moving from third to second in the chart and now therefore in pole position for pole position in a Semi.

This came about after he won the Final at Buxton after first across the line 700 Adam Rubery failed post-race scrutineering.   So unless things change significantly at the last round at Skegness on the 23rd, we will be looking at a front row of Bradbury and 647 Chris Burgoyne in one Semi and Speak and his (shale) arch rival 401 Barry Goldin in another.  Intriguing prospects…

The biggest changes are likely to be at the other end of the chart.  Still recovering from his leg injury sustained last month, 7 Gordon Moodie did not travel to either Buxton or Barford and whilst he IS set for a grid slot, he may have to use the last round to move him up the chart.

And then another big name and former multi-champion, 38 Dave Polley is just outside the top 56 at present and he too will be going into that meeting with points in mind.  Former track champion 676 Neil Hooper is recovering from his appendicitis and is probably even more glad of his maximum score at Northampton in April and will probably have to make do with that mid-grid start.

After all the travelling and great effort, it looks likely that 126 Jamie Avery will wind up the top southwest based driver in the chart and on a grid.  At the other end it is a definite well done to teenage white graded driver 979 Paul Moss who looks set for a Semi Final in his first season of BriSCA F2 but for 935 Nathan Maidment, whose season has been plagued by engine issues a trip to Skegness may be needed to make sure of a place on a Semi Fina grid on his home track.

Before all that though, two of the biggest weekends of the year are ahead with the UK Championship at Skegness and then the European Championship at Northampton.  Then the focus will shift back on to that road to gold…. And Mendips Raceway.

Just three rounds remain in the World Championship qualifying round series and so the grids for the two Semi Finals to be staged with us at Mendips Raceway are starting to more or less take shape.  However, much can change in the three rounds that are to come at Buxton, Barford and then the traditional last round at Skegness.

Whatever happens, track champion and track championship leader once again 886 Chris Bradbury will be starting from pole position.  He was on scintillating form last time out and scored a career first 50 point maximum, having come only one place shy of doing so at Taunton, the World Final venue itself only five days earlier.  Some are now suggesting he has “peaked” too early in the season, but that is unlikely; he will be the favourite to convert his front row start in a Semi into that of the World itself.

Surprisingly the two southwest rounds did not shake up the order too much other than consolidate some more of the local/home driver’s positions in the chart.  Certainly 189 Paul Butcher had a couple of good meetings and now looks likely to find himself well up a Semi Final grid whilst at the other end, a best ever score by 519 John Scorse at Taunton could see the local white grader get into a Semi in his first season of BriSCA F2 which will be impressive if he can manage that, and it could well hinge on who does, or does not score in the remaining rounds.

A Final victory in the Belle Vue round for 218 Rob Speak, which took place whilst Bradbury was dominating with us on June 30 has propelled him right up the chart and it now looks certain that the eight times World Champion will be starting from a front or second row starting position which is a mouth-watering prospect in whatever way you look at it.

The biggest news is that multi-champion 7 Gordon Moodie’s time out through injury following his Taunton crash last month was not anywhere near as long as feared.  Whilst there are thoughts that he has returned a little too soon, he won two Finals in Scotland over the weekend and will be looking to build on his scores in the remaining rounds and there is thus every chance to see him in the mix.

Fellow Scots in 647 Chris Burgoyne and 100 George MacMillan look to be well up there, 823 Sam Wagner’s regular trips to the southwest this year could pay dividends as he is currently well placed, as is the man who last won a Semi at Mendips a decade ago, and then followed it up with gold, 401 Barry Goldin.

As for some of our other locals and regulars, 921 Jack Aldridge is handily placed to continue to be a dark horse for honours but for 676 Neil Hooper, he was forced to miss the rounds at St Day and Taunton having had appendicitis and as a consequence could find himself mid-grid for a Semi.

With the Semi Final meeting now within sight, the remaining World Championship qualifying rounds are set to be played out over the coming weeks, which will decide the two grids for the two Semi Finals on August 4.  So, between now and then we are going to give you a weekly round up as a build-up to the big day.

Perhaps the most significant and unfortunate news this week is an injury for 7 Gordon Moodie, sustained in a crash at Taunton on Sunday when he suffered a stuck throttle whilst leading the Grand National.  He suffered a nasty leg injury which necessitated surgery to repair and whilst the extent or outcome is not known, he could be looking at time on the side lines.  Whether he can return in time for the Semi Final meeting obviously remains to be seen.

If Stock Car racing were an (official) betting sport then 886 Chris Bradbury would be the odds on for the gold this year.  We have pretty much got used to him dominating meetings at Mendips Raceway as a five times track champion and winner of all three Finals so far this season and only lost two last year.  He has put himself out of reach already in the qualifying points and looks set to start from the pole position of one of them.  However, he has also dominated Taunton this year too where the World itself will be staged in Septmber.  Ominous for his rivals of course, but this is Stock car racing and as it stands at the moment, rapid Scotsmen 647 Chris Burgoyne and 100 George MacMillan, the latter whom could have won the qualifier with us on Easter Sunday are right up there along with teenage sensation 921 Jack Aldridge, 101 Kelvyn Whalley, 823 Sam Wagner and defending title holder 1 Micky Brennan who added the Irish Open Championship to his repertoire last weekend at Nutts Corner.

What of the ‘home’ contingent assuming that Bradbury has not become an adopted son of the ‘southwest’?  676 Neil Hooper is the pick of them at present after his impressive maximum score at the Northampton round in April.   Next week the two other southwest qualifiers at St Day and Taunton will be staged which could and should add significantly to the home scores.  Many of the south west drivers have gamely travelled far and wide this season in search of points, perhaps without the success their efforts have deserved so these two meetings will be crucial for so many of them.  But hats off to them for going as far as Crimond in the northeast of Scotland in search of the points, as well as just about all points in-between.

Finally, word on legends of the sport in 167 Bill Batten and 218 Rob Speak.  Unfortunately the hopes of so many, including Bill himself to make a World Final in his native land for what could have possibly been the last time in his long career have been dashed.  An injury at work will see him out of racing for some time.

And Speak?  Well, he is running a dual campaign this season, in what he has been heard to say will be his last (at the old age of 42!) in both BriSCA F1 and F2.  He took the British Championship in the F2 on the shale at Kings Lynn last month and then made runner up in the F1 British at Buxton last weekend.   However, at the time of writing he has only made one tarmac F2 appearance and that was at Northampton.  That will need to be added to if he is to really make an assault on gold this year.
Plenty of water to flow under the bridge yet…