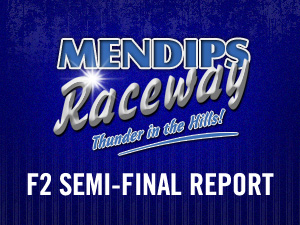 The biggest event of the season at Mendips Raceway arrived, and duly so did the break in the summer weather.  Almost an air on inevitability about that happening, with heavy rain during the morning which then cleared to showers whilst the meeting went on.

The drivers came from all four corners of the United Kingdom to race in the two BriSCA F2 Stock Car World Championship Semi Finals from as far apart as Aberdeen to Redruth in Cornwall, and all points in-between.  All of which was ably backed up by some fun on three wheels with the Reliant Robins who had their own trophy to race for.

The two Semi Finals put up some interesting grids, as those who had followed the World Championship qualifying on this website would know.  The added mix of weather and associated track conditions added to the drama.

The first Semi Final had a lot of the biggest names in BriSCA F2 all thrown together with reigning track champion 886 Chris Bradbury on pole position, as well as defending title holder 1 Micky Brennan on the second row.   The pack all got safely away at the flag and Bradbury shot into the lead ahead of fellow front row starter 647 Chris Burgoyne.  There were early spinners at the rear of the grid but they were able to very swiftly sort themselves out and the race settled down.  Bradbury opened out a decent sized gap early on whilst behind there was a battle for third between Brennan, 401 Barry Goldin and 823 Sam Wagner.  The latter seized the opportunity to take a hit on both ahead and aided by the slippery track conditions they spun and tangled up, and ended up tangled together in the centre of the bend, which brought out the yellow flags and both the current and former World Champions were out of the race.

Bradbury had the cushion of a backmarker between himself and second placed runner Burgoyne at the re-start and he duly pulled clear once again, as the track remained slippery and he looked at home in the conditions.  There was a battle for second though between Burgoyne and Wagner which saw the latter make a move in the closing stages, but could do nothing about Bradbury who was clear at the flag to book himself a front row start for the World Final, and also lapped all up to sixth place in doing so.  Wagner was happy with second, likewise Burgoyne with third.  7 Gordon Moodie drove a steady race to take fourth ahead of 126 Jamie Avery and 522 Chris Mikulla, both southwest drivers making it through to the big race.  The other qualifiers all found themselves lapped by the winner and they were veteran Scottish star and 2010 World Champion 964 John Fortune, 302 Dale Moon, 76 Chris Rowe and 817 Tim Bailey.

Back to back, the second Semi Final was next and had the legendary 218 Rob Speak on pole position in a race that was lighter on the ‘bigger’ name front but never the less included lots of talent that had got there on merit, and also with several withdrawals from this one several of the reserves present were able to take their place on the grid.   With the track slightly drier than the first Semi Final, it was actually more slippery and going was set to be tough.  Speak beat fellow front row starter 100 George MacMillan away at the flag and very quickly opened out a margin.  However, there was to be an early yellow flag as 768 Tom Adcroft and 186 George Turiccki tangled and were then joined in what became a heap by reserves 102 Willie Draeger and 854 Robbie Dawson.   Speak was able to comfortably lead the re-start with MacMillan remaining in second but the big mover through the pack was 38 Dave Polley and he demoted 921 Jack Aldridge to go third a few laps later.  As Speak and MacMillan pulled clear at the front there was a good battle from fourth place backwards, and then at that head of the field, as the race moved well into its second half so the track started to noticeably dry out and MacMillan was able to reel Speak in.

The vastly experience Speak, who practically invented many of the modern day tricks in Stock Car racing is not a hard man to pass, but MacMillan went in with a big hit just after passing the two laps to run mark.  This sent Speak wide and he’d been beaten, MacMillan looked as if he’d done enough to hold on.  However, in a dramatic twist on the last lap George came up to lap a group of back markers, all of whom were locked into their own battle.   They somehow managed to tangle at crash right in front of him.  It left MacMillan with nowhere to go but around them, Speak was held up too and Polley almost got on terms with both.  However, the upshot was that Speak was able to nip through on the inside to steal back the victory in a most dramatic finish.  MacMillan had very mixed emotions with his second place and Polley, whilst wanting to win, had to be satisfied with third.  The other qualifiers were 871 Mark Simpson, 189 Paul Butcher, 921 Aldridge, 124 Ollie Skeels (who came in as a reserve) 178 Mark Dews, 254 Richard Beere and 163 Craig Wallace.

The support car race was won by 700 Adam Rubery and the two consolations went the way of 797 Dan Moss and 605 Liam Rowe.   The Final was for the annual Freddie Funnel Memorial trophy and had the added significance of determining the grid for the World Final by the first successful Semi Finalist home getting the inside line for their fellow Semi Finalists.   There was a complete re-start after 178 Dews crashed on the home straight and the unsighted 964 Fortune T-boned him in the side.  Thankfully, Dews, though bruised was able to extricate himself from his car.  979 Paul Moss led off the re-started race chased by his brother 797 Dan and then 935 Nathan Maidment.

The big battle came down to the two Semi Final winners Speak and Bradbury as they came through the pack, in their battle for pole position.  Goldin then joined the battle with a big hit on Speak, which he glanced off of and then collected Mikulla and 254 Beere which left the latter stranded in the track to bring out another yellow flag.  Maidment had taken the lead by now but then there was another yellow flag with 871 Simpson stranded.

Maidment once again led off the re-start, with 676 Neil Hooper right with him whilst Speak and Bradbury continued their battle with a big hit from Speak sending the 886 car wide on the bottom bend to win that place.  This was a little way back from the lead battle and try as he might, Hooper was unable to get close enough to Maidment to land a hit and thus Nathan took his second Mendips final win in as many weeks, this one resulting in a return to the star grade.  Hooper was therefore second and significantly it was third for Speak, which bagged him pole position for the World Championship.

The rain returned for the Grand National and it was once again all about Speak and Bradbury, as they showed their mastery of the conditions.  Speak was forced to retire with a broken rear wheel guard and Bradbury went on to win by almost half a lap.

The Reliant  Robins saw plenty of action and rollovers, including a big pile up right at the start of the second race where it proved that pigs really can fly!  The World Cup race was first in a drawn grid and was won by 78 Mark Bowskill ahead of 499 Lee Charles and 644 Mark Tompson.  The latter then took the second race and Bowskill came back to take the third.  Remember that the next instalment for the Robins is the annual figure of eight race on Bank Holiday Monday.