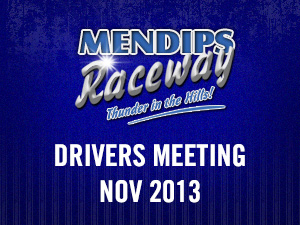 Bangers: Three regional meetings had been held to discuss the car build rules for National bangers. Many drivers were looking for changes to make the cars simpler to build and not so strong, but the West Country meeting has not been very well attended. The promoters were looking to have a meeting shortly to decide the rules for 2014. There were no rule changes for Rookie bangers, but there will be at least two Qualifying Rounds for the World Championship at Ipswich. The popular two day meeting at August Bank holiday was confirmed, as was the West of England Championship in October.

Robins: Robins had been very successful in 2013, and Mendips Raceway drivers had taken part in the eight round Midland Championship series at Grimley and Incarace tracks. Mendips Raceway would be running two Qualifying rounds for this series in 2014. All drivers would receive 10 attendance points at each round. There were discussions on car construction rules, and scrutineers will be looking for any deliberate offset being built into cars, with efforts being made to make sure that cars rules were the same at all tracks. The use of expensive tyres will be reviewed, with the possibility of certain tyres being banned.
It was agreed to separate the racing points and the entertainers points, and Mark Loader offered to provide a Trophy for the entertainers league, and the £100 prize.

Special Rods: Paul Feltham said that during the season, all cars had been checked to make sure their camshafts were legal, and he had found three that were outside the rules by having too much lift. In order to stop the pit lane racing, all grids for heats will be published in the programme in reverse points order. Brisca F2 had signed a new contract for two years with Yokohama, which would ensure that tyre supply would not be a problem. It was agreed that vernier timing pulleys be permitted as a low cost option to make camshaft timing more accurate, and it was confirmed that the flywheel rule that was changed in 2013 did permit steel flywheels, provided that they met the 6.2kg minimum weight. Drivers were told that engines would be removed and flywheel weights checked in the coming season on a random basis.

Junior Rods.  During 2013 many cars had been checked with regard to restrictor plates, and unfortunately two had been found illegal-one with a venturi fitted, and one with an oversize hole. It was agreed that wherever possible carburetors would be sealed to manifolds once the restrictor plate had been checked. Pit lane marshalls pointed out that there were still drivers with incorrectly adjusted harnesses, and parents were advised to make sure that their drivers were properly strapped in, or they may be sent back and miss a race.

Hot Rods:- Several cars had changed hands, and a good grid was in prospect for the ne season.

Staff:- Three key members of staff had confirmed that they would not be working in 2014,  Andy Chant, Dave Steeds, and Ian Whitford, and their replacements will be announced before the start of 2014. The staff training day would be Saturday March 8th, where a practice rescue would be carried, in conjunction with FAST Ambulance services.