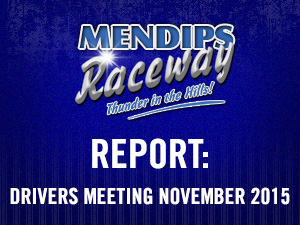 Rob Mills outlined the 2016 fixtures list, which had been designed to be more driver friendly as regards car building. It was agreed that the Van Banger meeting would only permit the use of the 2litre Pinto or 2litre Zetec for engine swops, but all original diesel engines would be fine up to 2.5 litre. THUNDERBOLT 2016 would be Old Skool which proved popular in 2015. British Beef would not run in 2016 but be replaced by Ayles and Farewell, a tribute meeting for Jason Ayles for back to basics bangers under 1800cc.

The Graham Salter meeting would be restricted to 90 cars, with drivers carefully selected to prevent the difficulties of 2015.

National Banger rules would be the same as 2015, but as always, enforced properly.

In 2016 there would be no World Championship Qualifying Rounds, but a system of attendance points, Top Tin points, and entertainer points so that all drivers had more chance of qualifying. This system would be used for all meetings of National Bangers, including Old Skool, but not Back to Basics.

Finally, the use of 3 series BMWs in Old Skool Unlimited is now restricted, as the rules only permit cars with a minimum of 1360 kg kerb weight, and minimum of
1998 cc.

No change in rules for Bangers, and World Final qualification will continue to be by means of the National Points list, and only open to Mendips Raceway registered drivers. The Points Championship will be decided over the four Banger meetings plus the Back to Basics in September.

There will be no points awarded on May 29th or the June weekend.

Robins have had a very good season with few problems, but it was agreed to clamp down on cars that had been lowered both sides. It was agreed that on Crazy Day there would be one wrong way round race but not programmed so drivers would not be able to change their cars in advance.

There was much discussion over the future of the formula and whether alternative cars would be used in the future. Most drivers did not see the point in building a BMW on Sierra running gear, but there was enthusiasm for testing a Zetec engine, and Kevin Oliver agreed to build one based on banger spec to test in 2016.

Blue flags were discussed and drivers wanted these used more.

Grading is now to be after every meeting, not every two meetings. Drivers were reminded of the importance of clear roof numbers, which is primarily for relining grids after stoppages.

Richard Elliot Turner said that he would be unable to continue as driver representative due to his role in Race Control, and Matt Anderson agreed to take this over.

In order to stop the pit lane racing it was agreed to publish the grids in the programme according to points scored on the National points list-highest at back of grade. The Final would be public draw on the track, but heat winners back of grade.

There has been a report issued since the fatal accident to Keir Millar at Lochgelly, by Fife Council, which recommends the use of head restraints for Junior drivers, which will be  discussed at ORCi level in January.

We have researched this and can offer a couple of links for drivers to follow up:

Mike Norton agreed to continue as driver representative for Hot Rods. It was agreed to make a substantial change to the grids, by running the first heat as highest scorer in the National points at the front, and reverse this grid for heat two, with the Final highest points scorer of the meeting from the front. Grids could thus be published in the programme. The West of England Championship would continue to be gridded as in 2015.

Steve Weston has offered a substantial prize for the Points Championship-£500 spread over the first three places, and will also support that September 19th meeting under the branding of swpics.co.uk, which is very generous and welcome. Steve is a great Hot Rod fan and photographer.

Phil Griggs has agreed to be scrutineer,

All in all a very productive meeting ,and with a number of new drivers in each formula, 2016 looks to be a good year in prospect.