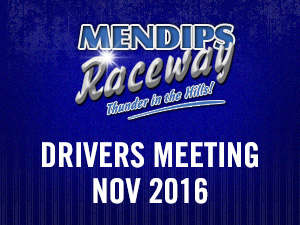 Rob Mills outlined the 2017 Fixtures which was based on 2016, but had extra Micro Banger meetings which are popular, and three Back to Basics meetings, including one Unlimited. Micro bangers will now be run to ORCi National banger rules up to 1400cc, and the list of eligible cars is in the Rulebook.

All National Banger meetings would count towards qualification for the World Championship Final, with the same system of attendance points, Top Tin points, and Entertainer points so that all drivers had more chance of qualifying.  This gives a total of 5 points scoring meetings for the World Finals, and one more to conclude the National Points Championship.

No points would be given for Back to Basics meetings, or the Graham Salter Tribute Meeting.

The only change to the rules is to reduce the minimum tyre profile to 50, and maximum rim size to 6J.

New for 2017 is a ruling that all race winners must start at the rear of the grid for subsequent races. Rob Mills said that some cars need better preparation for driver safety, especially on the drivers’ door. The Caravan Destruction derby would take place on the May Day bank holiday May 8th, and Crazy day at Whitsun on May 29th. This has been changed since the drivers meeting, as the Whitsun Bank holiday was not suitable for the Caravans.

Russ Colenutt agreed to continue as driver representative. Contact between cars is a constant problem, and it may well be that Finals will be restricted to 16 cars in the future as the West of England race had been excellent. Drivers door mirrors are to be allowed, and more blue flags will be used. Drivers ignoring the flag and not holding their line could be black flagged and disqualified.

Dean Quinn had fitted a Zetec to his car, and this would be permitted for 2017, with points, as an evaluation. Subsequent to the meeting Dan Latimer also offered to build one, and this was agreed. It was agreed that engines can only be overbored to 1mm. The promotion will undertake to take the cylinder head off one car per meeting on a random basis to check bore, stroke and valve sizes.

Cars that were too badly damaged or presented could be stopped from racing.

Matt Anderson was praised for his work as liason officer, and agreed to continue.

It was proposed, and a vote carried that all cars must use 13” wheels, and tyres with a minimum profile of 70, and a maximum width of 155. There was much discussion over the lowering of cars, and the use of competition suspension components, but we believe that anything that makes the cars faster is to be avoided, and after consideration, the rules on suspension will remain the same. There are also cars that have had bodywork cut away, and these cars will need to be corrected. The restrictor plate rule clarification that was advised in May 2016 will be in the new rules, and cars will be checked more regularly.. Parents must be more vigilant when fitting safety harnesses, as Marshalls are having to tighten them on track. In future, drivers may be sent off. There still drivers who seem not to understand the flags, and efforts will be made to adopt the rule that requires drivers to stop within a quarter of a lap should a red flag be necessary.

Phil Griggs would continue as driver liason and scrutineer. The grids would be changed again, back to random draw, reverse grid, and top scorer off the front of the Final, and this would include the West of England Championship. A number of new drivers were in prospect for 2017.

All in all a very productive meeting, and with a number of new drivers in each formula, 2017 looks to be a good year in prospect.