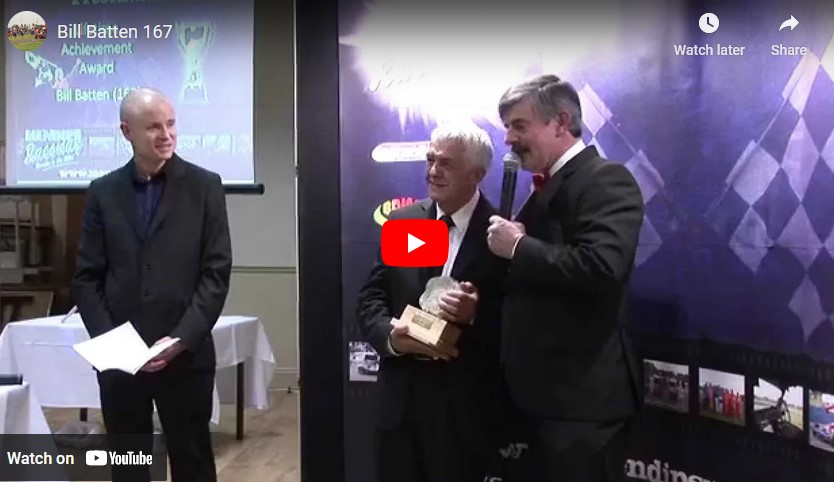 With Bill Batten as Guest of Honour, it was very appropriate that exactly 167 guests sat down to dinner at the Webbington Hotel on Saturday February 7th, with representations from all corners of the oval racing family.

After an excellent roast beef meal, it was presentation time, and to start off, Bill was welcomed to the stage where, to his surprise, after a recap on his incredible career achievements, Steve Linfield introduced a replay on the video screens of the 1993 World Final at Crewe, which was a fantastic race between Bill and Ian King (804). As Ian was also present, Steve interviewed them both, and Bill revealed he had never seen a replay of the race!

After the presentation of the West of England Trophies, and the Points championships, including the joint win in the Juniors by Ben Brice (700) and Charlie Ayles (300), the time came to announce the Driver of the Year, and after a close contest, with 3rd place Jamie Knox(189) second place Tim Weare (304), the winner, to great applause, was Scott Weldon (517).

Both Bill Batten and Chris Bradbury (for his 7 consecutive points championships) were presented with Lifetime Achievement Awards in the form of a piece of suitably mounted Mendips rock. Sadly, Chris was not available due to a dose of the flu, but the award was accepted by Mike Priddle, together with a large badge with number 7 on it, to much amusement!

The raffle provided the amazing sum of over £500 which was split between FORDS and Cancer Research UK, and as always, the drinking and dancing went on late into the night.