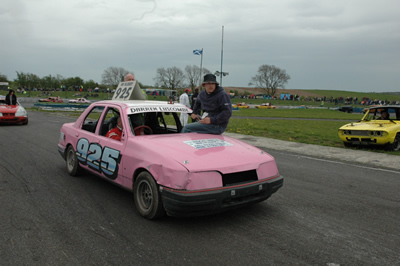 We were very shocked to hear today of the untimely death of Darren Luscombe. Everyone knew Darren as Blobby, and he had been involved on oval racing for many, many years, as a banger racer, mechanic and helper to other drivers, such as Alan Green, and from his Swindon home he travelled widely watching the big banger meetings. In 2008, he started a Special Rod career at Mendips Raceway, and raced up through the grades and quickly established himself in the formula. His health had not been good, and he told us he would not be racing in 2009, although we had no idea that he might never see the Raceway again. He was a true gentle giant, who enjoyed his racing for what it was, and will be missed by all of us in the oval racing family.