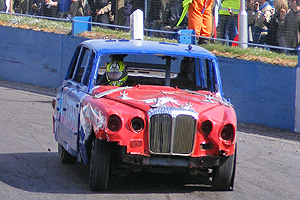 Popular Wales based driver Pet ‘Bungle’ Wake has decided to hang up his helmet. He was going to make the Civil War in January 2012 his last meeting, but is fired with enthusiasm for one last go by the Banger Olympics meeting at Mendips Raceway on Sunday July 29th, and has already assembled a team of drivers for the purpose, including himself, Tim Wood (88), son Dan, and Bam Spooner. However, to avoid temptation, he has asked us to advertise all of his racing gear, which he would like to sell as one lot to an up and coming driver.