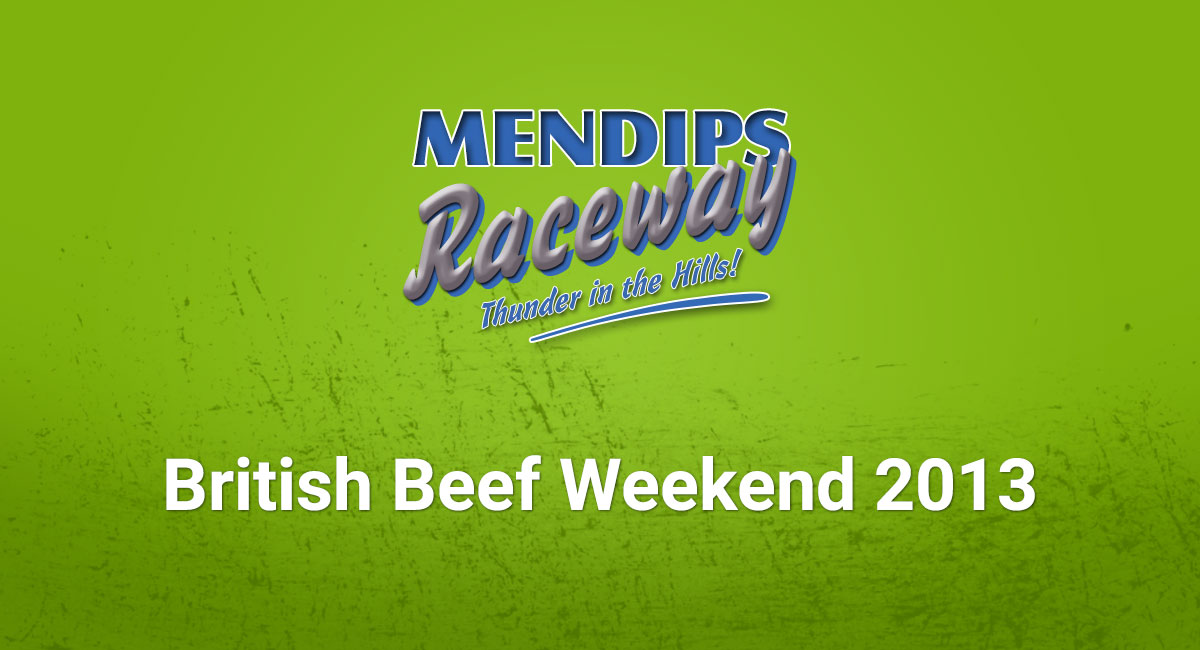 Mendips Raceway will be back in action this coming weekend for our annual two-day Saturday/Sunday event and for purist Banger fans it is simply one that you cannot afford to miss, and there is also high speed action from the Hot Rods and BriSCA F2 Stock Cars too as well as Heritage Stock Cars and Junior Rods over the weekend.

The National Bangers will be here on both days, and significant events both too with the annual under 2 litre all-Ford rear wheel drive “British Beef” session on Saturday and then the Graham Salter Tribute, ‘Old Skool’ meeting on Sunday afternoon.  The weekend has attracted a fine entry once again and there is a very healthy contingent heading up from the south coast, just as they have done for this meeting and weekend over the years and and this season in general.

Last year’s British Beef was won by 210 Paul Barnes who concentrates more on his Special Rod racing now, but it was a good win in the wet.  It is 54 Tom Davey who leads the overall points coming into the meeting, helped by that hat-trick of wins on the Sunday of the last Bank Holiday weekend.

As you will see from the invited entry list, there is a definite 1990’s look to the entry on Sunday, in memory to Graham Salter who died in 2011, the list that has been put together for the meeting is highly impressive and has pretty much been kept a secret until 10 days ago.

As well as many of our current regular drivers there are some who are rarely seen and others who have not raced, at least not in a Banger, for a long while.  The idea is to have ‘Old Skool’ cars for ‘Old Skool’ crashing without a lot of (the often needless) welding and tuning that goes into a ‘National’ Banger in the 21st century.   It could well be one of the highlights of the summer, so do not miss it.

Saturday evening will also see the annual outing here for the Heritage FII Stock Cars, as well as what were largely then known as the Juniors, we will also see the Heritage F1’s, originally known as the Seniors back again and they will have some of the very old machinery on track, which dates back to the very beginning of the sport here in 1954.  With the F1’s, there is an air of more of a demonstration whilst in the FII’s, many of whom are ex-drivers of the period considered of 1961-1972 things are sometimes taken quite a bit more seriously.  The Hot Rods will be going for the Parkhouse Trophy, which was won by 18 Larry Langmead last year and he will be back to defend.  Last time it was 718 Colin White who took two wins with 258 James Griggs taking the other, whilst the points lead is with 282 Steve Hunt who will be right amongst them as ever.

Sunday will see the BriSCA F2 Stock Cars for their fourth meeting of the season here, and the question is, who can stop 886 Chris Bradbury as he has swept to all three Final victories so far which all bodes well for the World Championship Semi Final meeting in August, where Chris has already done enough to earn himself a pole position start for one off those. Not only this, but Chris is looking like he could be on course for a sixth track championship in a row, although the ultra-consistent 921 Jack Aldridge could well run him close and the two more local stars 522 Chris Mikulla and 783 James Rygor will not be far away either.  However, there are quick lower graders, and one of them 464 Matt Linfield has won both rounds of the Rookies Reward so far this season and could well be the favourite for round three, which will kick things off this time.

Finally, having missed out last time the Junior Rods get a return to action on Sunday and have produced some very good and close racing so far this year.  The time they raced on May Day Monday it ended up being a cliff hanger of a result as it had to be taken from the last full completed lap, which put 24 Sam Crane back into the lead and victory, just after 87 Callum Richards had taken the lead.  He however comes into the meeting with the points lead ahead of 362 Aaron Loader and 700 Ben Brice, one of three in rear wheel drive cars this season, bring us back to where we came in, on the ‘old skoo’ theme.  Remember this is racing for 10-16 year olds and we have seen so many Stock Car and Banger drivers come through the ranks, and expect that trend to continue in the years ahead.

Remember that Saturday evening has a start time of 5.00pm to allow plenty of daylight running and then Sunday will be the usual start time of 1.00pm.  We look forward to your company.