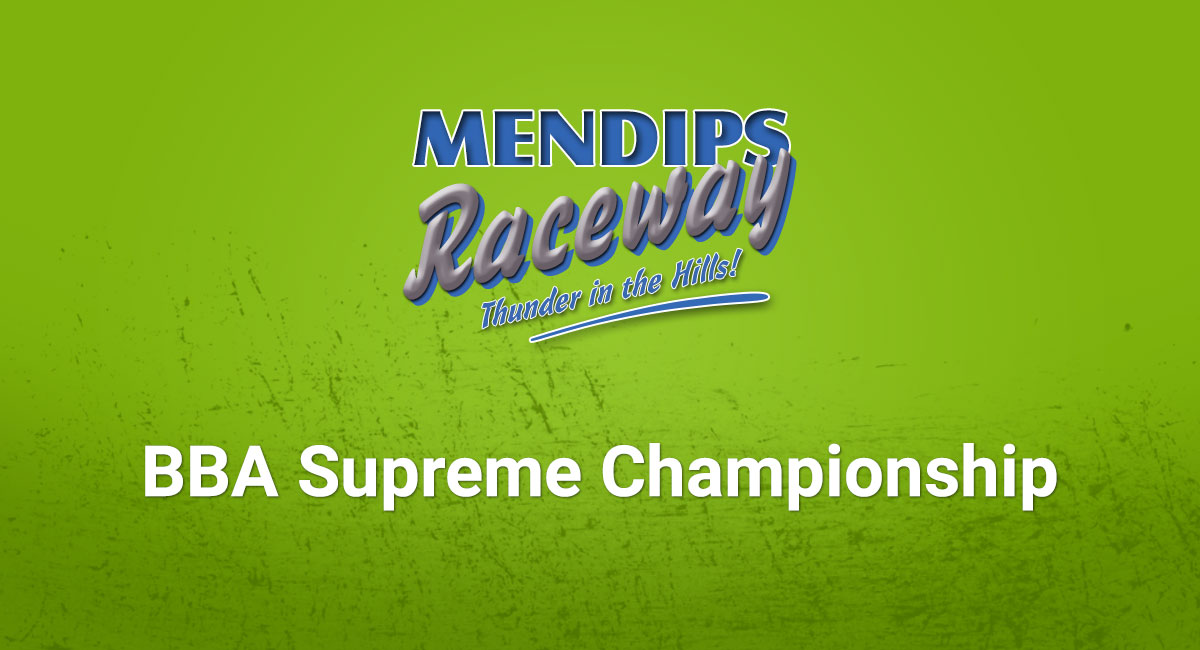 The 2009 National Banger BBA Supreme Championship attracted a whopping field of just over 150 cars to Mildenhall on a miserable March 28, the entire day littered with showery conditions which made for a damp looking stadium when everyone arrived.

Nonetheless the field included drivers from every ORC promotion and it was pleasing to report an almost 100% attendance by the qualifiers for the main event who had confirmed their intention to compete, just four finalists failing to arrive without prior warning and with a couple of reserves getting in at the last minute it left 46 contenders for the main event. The entry was predictably dominated by Mondeos but there was a smattering of RWD interest with a handful of large Volvos and a smaller number of

Granadas which included a used Mk2 limo for 292 Keith Saunders and stunning hearse for 88 Alan Read for the title race although sadly engine gremlins resulted in his car being one of a few which failed to make the track all night.The Supreme Championship was the first race on the programme, a few late arrivals and problems behind the scenes with the electronic transponders meaning the driver introduction didn’t begin until 6.30pm when the meeting was scheduled to start.

Nonetheless 44 drivers were introduced for the big race, the field including five current world champions and a further seven ex world champions plus a whole host of current and former champions of the sport for a star studded line up.

The aforementioned 88 Speedy and 741 Luke Parfitt (Cavalier) would have also received awards had mechanical issues not kept them in the pits and there were further woes for 271 Dean Goodall and Saunders whose cars let them down on the grid.

After all the drivers drew either the inside of front row of the grid, an Incarace draw was used to determine the front row and it handed 206 Dave King pole position with 188 Victor alongside, 349 Lee Saunders (Primera) and 396 Scott Mowlam (Bluebird estate) on the second row and 437 Chris Bailey (Primera) and 67 Sparky behind. Defending champion 439 Danny Sutton (Vectra) found himself in the middle of the pack while 516 Carl Gould (Cavalier), just like the Spedeworth World Final, found himself at the very back of the grid.

Sadly just after the driver introductions were completed the rain which had threatened to return all afternoon started to fall and got increasingly heavy as the race continued. Nonetheless the cars set off for two rolling laps, the skies lit by a small fireworks display on the second lap. Bailey was the first to strike as he attacked Sparky although the latter did well to not spin but 528 Alan Hunt (Rover) was not so lucky as he was wound out by 190 Steve Bailey and 11 Darren Race clobbered the spun 844 Tom Haggerty on the nose and a pile-up quickly formed on the back straight.

Victor grabbed the lead early on with 206 Kingy, Sparky, 617 Jack Overy and 348 Sonny Sherwood the front runners as 516 Gouldy stuffed 432 Mark Munson into the fence on the back straight allowing 349 Michael Allard (Cavalier) to home in with a big hit on the Gladiator. Overy was looking very quick and raced into second with 348 Mushy behind as Allard and 247 Lee Clarke also emerged as front runners. 432 Mental Mark took a swipe at the passing Mushy on opposite as the bad luck for the Gladiators continued when 206 Phil Milner was buried by 218 Rob Speak.

Meanwhile the Blue Crew v Midnight Runner war featured as 592 Mark Marchant and 190 Pikey went head to head. Allard had now raced up to third place as Mushy was stopped by a dodgy inside out attack from 206 Turkish which resulted in an immediate black flag for the Gladiator. 247 Bro ran into Mushy in turn costing him much time as Speak attacked Kingy which in turn claimed Sparky. 119 Cruncher now nailed Turkish as 53 Dave Palmer had 470 Pete Corbett (Primera) out. 409 Carl Pears now began what would be a lively showing as he buried 714 No Show’s ultra smart Mondeo before 730 Deano ran head-on into Turkish. Bailey crashed head-on into Mushy as Speak span Sparky from contention.

409 Carlos continued with a hit over the rear wheel of the superbly turned out 384 Goldie with 37 Dave Lewis (Rover) getting caught out in this crash. Sparky meanwhile turned round and destroyed Corbett with two savage hits by the pit gate as Bro picked out the spun 528 Jethro and administered a solid head-on. Kingy enjoyed a brief spell at the front but Victor soon reclaimed the lead by which point 294 Lee Hughes had moved into third as Carlos stuffed Bro into the fence.

The race now hit the half way stage of the 25 lap distance by which the track conditions were worsening rapidly as the rain fell even harder and the pace slowed dramatically for the final 12 or so laps. Nonetheless 158 Shane Davies turned round and pounded Goldie into submission with a string of hits as the entertaining Carlos piled 198 Marcus Goldsmith into the luckless Goldie.

Sparky dumped 294 Stuntman into the pit bend heap costing the Condom plenty of time but Kingy was also delayed, allowing Stuntman to catch him and he punted him into the fence to grab second. Carlos now picked up 517 Scott Weldon and followed him in, this also claiming Sparky as Victor led the race into the final five laps. By now only Stuntman remained on the lead lap, about half a lap adrift of a smoking Victor with Kingy, Speak, Cruncher and Gouldy next in line. Speak put away Goldsmith which also claimed Stuntman putting more distance between him and the leader and Speak had a further pop at Stuntman a lap or so later, Carlos delivering the final action as he buried Weldon.

Meanwhile Victor kept his cool and carefully survived the final laps to register his first major win in his career, Stuntman second and Kingy and Speak joining them on the podium. Gouldy took fifth with Goldsmith, Bro, 349 Finbarr, Lewis and Weldon wrapping up the top 10.