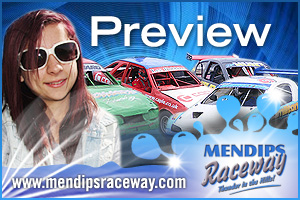 Mendips Raceway will be back in action this coming Bank Holiday weekend with two meetings, with racing on Sunday and Monday with a vast mix of classes over them, something for everyone with Bangers, Stock Cars, Hot Rods and a lot more besides.

On Sunday, The BriSCA F2 Stock Cars are back in action after their ‘Pink Ribbon Trophy’ last month which was won by 76 Chris Rowe. He is set to be back, as part of what is a well populated blue grade.

The Freddie Funnel Memorial Trophy is the main event on Sunday, a long standing trophy in itself remembering the first British Champion in the formula back in 1961. It was 374 Gary Stephens who was the victor last year, whilst the track championship business will continue with just next month’s meeting to go after this one. 886 Chris Bradbury heads the chart, as he looks for an unprecedented four in a row, but 676 Neil Hooper and young-gun National Champion 921 Jack Aldridge are not too far back, so it is set to go to the last meeting this year, which it has not for the past few.

The National Bangers have a rest this weekend and instead it is the last two sessions of the year for the Rookie Bangers where the emphasis is more on ‘racing to win’ and ‘spin and turn’ rather than any out and out wrecking and blowing up and with slightly lesser preparation involved it is designed to encourage potential drivers from the terraces to the track and it certainly has the desired effect with good entries expected on both Sunday and Monday which include a few son’s of Banger drivers from the past, and several others that are set to have their first taste of competing at Mendips, even if they have had some experience on the local ‘grass’ circuits.

The Rookies were last here over the Easter weekend where 246 Ryan Sparkes took the top honours with a heat and Final double. Even though, it is a slight change in format, as in previous meetings we can still expect to see many of our locals and regulars from the Bangers all joining in the fun – and that word leads nicely in to how things will round out on Monday as we reach Carvandalism 9.

The annual caravan race for the Chris and Becca Trophy, which was won last year by 9 Adam Elias, and there is extra money on offer for well presented caravans and it looks likely that we will see a fair few meet their end on Monday afternoon, which will be a perfect tonic for all those who despair when the M5 is clogged with them at times!

The youngsters in the Junior Rods will reach their penultimate meeting of the season and in their points battle and in what has been a very close battle since the first meeting between 127 Louis Aldom and 510 Sid Harrison. Last time though, back in June, it was 404 Maculay Mills who won the Final and 300 Jack Ayles his first win at Mendips in the Allcomers, but that was a race marred by some over the top antics by some, and as a consequence punishments were handed out. So, they will have to be on their best behaviour this time it all to play for as they head for their big climax to the season in October and their West of England Championship, but the first year of the formula being opened up to other cars rather than 1000cc Minis will be looked on as a success.

24 hours later we will be here once again for one of the highlights of the season, the August Bank Holiday Monday always has a special feel about it especially with the day concluding with the annual afore mentioned caravan race.

We will have the last of the season for the Reliant Robins, who have once again had a good season of racing – these ‘cars’ were never designed to be racing vehicles, and the fun and games as the drivers try to do so is legendary.

And what is also amazing, is just how good some have got at doing just that. 87 Barry Richards has become the master of the art, but 499 Lee Charles who was the winner last time and took the annual Figure of Eight race for the Caterers Cup, which rounds out the day for them. From the fun and games of the Robins and Bangers, the high speed non-contact Hot Rods will contest their West of England Championship.

The points championship reached its conclusion here at the meeting last month with veteran 282 Steve Hunt taking another title to his name. The main race will be their first and was won last year, albeit in controversial circumstances by 89 Mick Cave, who has only raced here the once here so far this season. If 718 Colin White and 904 Wilson Hamilton are present, to name but two then things could be very close indeed.

The all Sierra Special Rods will round out the programme with their usual brand of close and competitive racing. Today is always a good meeting for them, with many of the local drivers’ family and friends coming to watch the racing. Last month the lower graders really did take some catching, with 44 Sam Howard and 370 Steven Baker taking a 1-2 in what is their first season in the bigger cars, whilst 17 Shane Newman ended up the pick of the established names but 18 Russ Colenut remains at the top of the points and things are always close in the Sierras, and the points battle shows this as like the Junior Rods they gear themselves up for their big climax to the year with their own West of England Championship on October 9.

Both meetings will start with a parade of competitors at 1.30pm.