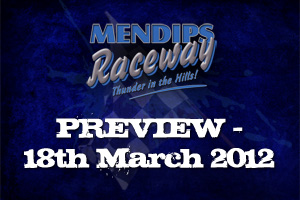 Our opening meeting is on Sunday March 18th, where we will wish you a very warm welcome to Mendips Raceway for the start of a new season which is our 44th and as ever there is something for everyone in the oval racing world between now and October with all the favourite classes, cars and drivers set to return. For today though, we wish all the mother’s here present a happy Mother’s Day and hope you enjoy your day here at the track.

Banger racing of one form or another will form the back bone of the whole season here once again, with the top National Banger sessions back once again and we have an enhanced schedule for the ever popular ‘Rookie’ Bangers too this season. But for today, it is the old adage that small cars are big on action as we have the annual Micro Banger meeting which got 2011 off to such a great start. The amount of the small cars available, under 1200cc makes today a lot more accessible and at the time of writing the entries for today are rising nicely. Car wise, expect to see a lot of the Ford Ka’s – which are a lot stronger than their diminutive size suggests and whether we see any ‘old’ material remains to be seen, but popular local favourite 363 Sam Trim is set to have another Hyandai Pony, just as last year when he outlasted them all to win the destruction derby. Last year 27 Dean Quinn took the Final honours, and he will be back again today whilst another local favourite, who missed the second half of the season through injury last year 15 Ben Tovey is set to return to the track. There is the travelling band from the south coast set for the trip up once again and from even further afar a group of the ‘Dingles’ from Cornwall. At the start of the meeting 517 Scott Weldon will be presented with his 2011 Points Championship trophy, proof, if it was needed that Banger racing is not totally a young man’s sport and the original ‘Warlord’ will be out to defend, and wear the silver roof with pride throughout this season.

The Hot Rods get an early start to their campaign, although hopefully the disasters were all over and done with at the practice day a fortnight ago when a blown engine from 88 Alan Shelpher resulted in an oil slick and ensuing crash. Hopefully all involved are able to make it today. 282 Steve Hunt was the points champion last year whilst 718 Colin White, who took the West of England Championship on their last outing here in August is set to be present and as ever, will be the man to beat.

The Junior Rods for drivers aged 10-16 come into their second season since they were reincarnated from the Mini Rods, although that said, the Mini still remains the most popular car and competitive too which is exactly how it should be. Speaking of competitive, the points battle went right down to the wire once again last year as 127 Louis Aldom took the points, just beating 510 Sid Harrison. However, had 404 Mac Mills not missed a couple of meetings he too might have been in contention for the silver roof. There are several new youngsters having their first outing today and we wish them all the best as the road to finding the future talent of the sport continues nicely.

Here is the current list of Banger Drivers booked :-